Share All sharing options for: Great Padres Fan that we all are happiest for after last night's win 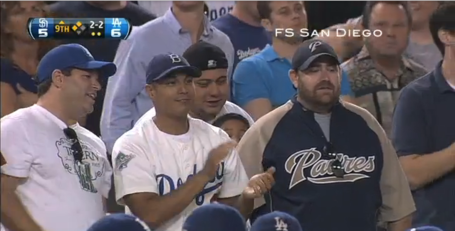 There he was, being Great Padres Fan. He made the trip over to Chavez Ravine and was planted right in the heart of Dodger Fan. Two outs and down by one in the ninth, he wasn't feeling great about the chances of our team. Confident Dodgers fan next to him was being respectfully confident with his handsome face and Brooklyn "this makes me old school" Dodgers cap, but at the same time, Confident Dodger Fan clapped just a little louder than he really had to. Great Padres Fan considered shaving. 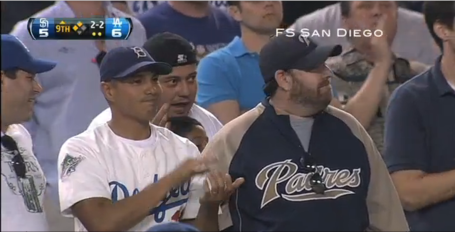 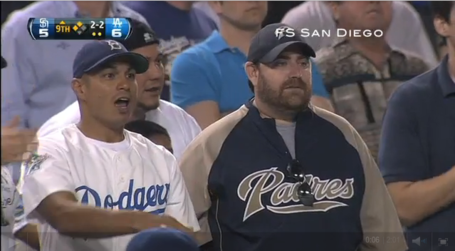 And then... Just as Jansen turned his back all cocky like, Everth Cabrera broke for home. The look on Confident Dodger Fan suddenly turned to one of Hey, yo.... There's a fly in my drink. While Great Padres Fan's expression suddenly eased into one of, Oh. Well now this might something kinda interesting. 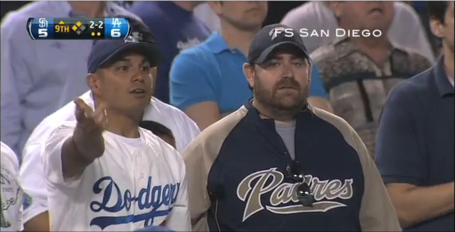 And unfortunately, the last we see of Great Padres Fan is this shot. Awareness of what is happening had not yet settled in and the camera cut away to see Everth Cabrera and Will Venable violently rob the Hated Dodgers of a win last night.

We can only imagine what the shots looked like after that. Did Confident Dodger Fan cry like a little b_tch? Did Great Padres Fan literally jump for joy? All we know is that his faith was rewarded and we can rest easy is the fact that he rested easy last night.