Fox Sports San Diego, get off my lawn!

Share All sharing options for: Fox Sports San Diego, get off my lawn!

Once this picturesque corner of the ballpark was only home to a majestic statue of Tony Gwynn and served as a meeting place for fans. Now it's a tangled mess of unsightly television equipment. It looks like the whole area is being assimilated by the Borg and resistance is futile. It's roped off and off-limits to fans as cables and wires creep across the commemorative bricks that were purchased by fans to pay tribute to Gwynn. Slowly they tighten their grip, choking, robbing the area of everything that it was intended to be.

Now to be fair, this Fox Sports stage is only "semi-permanent" but when I talked to FSSD employees earlier in the year they offered no other alternatives and didn't seem to have any future plans of moving the stage. The shots do look great on the television broadcasts but in person the area looks tacky at best and disrespectful of Gwynn at worst. 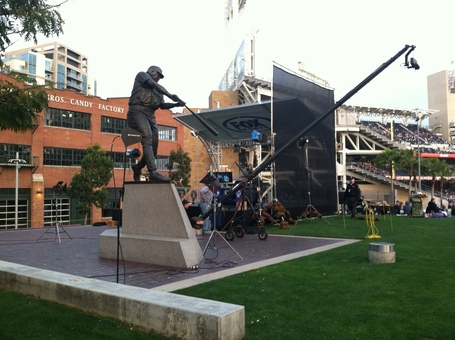 Originally we heard rumors that FSSD would eventually rent and move into the old Channel 4 studio in the Diamond Tower, but that might be too small for their big production. When I asked an employee about it on Opening Day she said "We might use it for something."

I was trying to think of some better places to put their stage. In the picture below the square is where the stage is set now and the circles are where they should consider building a new stage. Assuming FSSD needs the field as the background for their telecast I think any of these locations would work.

The area behind the Padres bullpen might be a good place since it's out of the way and only used for corporate groups. Same goes for the seats on top of the Western Metal Supply building. A stage could maybe be put in the flag court too as long as Budweiser doesn't mind moving their never ending frat party. I think there may be enough room behind the beacher seats too if you move a concession stand. Anyway, I'm just thinking out loud.

But seriously the stage is an eyesore, I hope a permanent solution far away from Gwynn can be figured out in the off season. 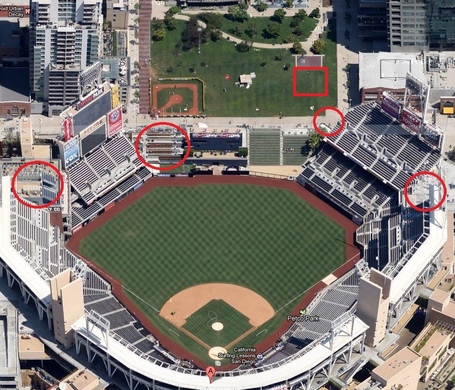