Share All sharing options for: Fox Sports San Diego delivering a message to Time Warner Cable and other news

FSSD fighting in the streets

Time Warner Cable and Fox Sports San Diego have been in stale mate since the season began. TWC thinks FSSD is too expensive and refuses to carry the channel and as a result half of San Diego residents don't even have the option of watching their home team Padres on TV. So it appears that FSSD has resorted to this strange tactic.

Hang around a TWC service center long enough and you might see one of these guys. Awkward. #IWantMyPadres twitter.com/FoxSportsSD/st…

They've parked a truck in front of TWC offices with built in TV screens that say "You've already missed 60 Padres Games on Time Warner Cable. How many more will you miss?"

This just tells me that the two sides are even further apart than before. Ugh.

The tweet was just deleted. Awkward. Here's the picture: 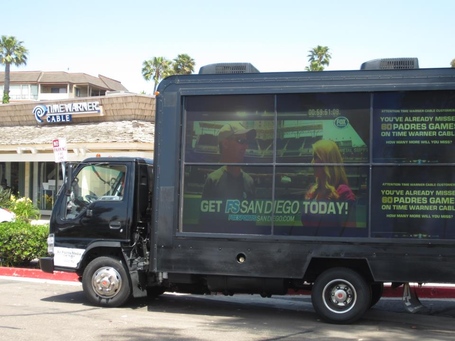 Word is that Padres legend Trevor Hoffman will be filling in for Mark "Sweendog" Sweeney on a road trip at the end of July when the Padres visit Cincinnati and Miami.

Also another legend Tony Gwynn will make an appearance on the FSSD pre-game show in the near future. He'll be seated in front his own statue, he's looking forward to it, literally. He has apparently said that he really likes the stage in close proximity to his statue.

It appears the FSSD girls Brittany and Krista are no longer "just a click away". Their images have been scrubbed from the FSSD Facebook and Twitter. They're names still appear in the bio section of their Twitter and the last initialed tweet was from "B" 19 hours ago but I still suspect something is amiss. My Spidey senses are tingling.

Britt used to compliment Dex and I on our boyish good looks. "Oh you guys are so young and handsome!" I'll always remember that about her.