After reading all the other legendary Sisterhood stories I have to say that I was actually quite nervous about getting the jersey. Would I be able to tell as good a tale as all the other episodes of the Sisterhood? Would the jersey accept me as a worthy wearer? Would there be a story to tell?

All these questions haunted me until I met London Balling, had a good yet short talk, saw the jersey and wore it for the first time. Naturally the jersey fit well and through its magic I got the confidence to write my story with the jersey. I’m not saying it will be as good as the former posts but I can definitely say that I had a lot of fun doing it. So without further ado the Belgian chapter of the Sisterhood of The Traveling Jersey is after the jump… 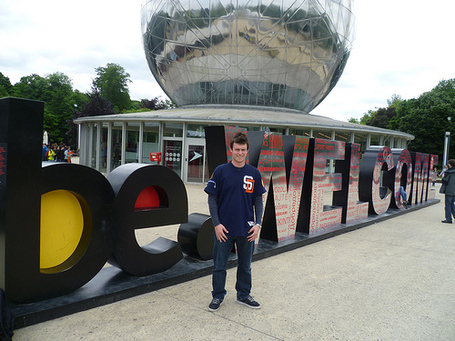 The first trip with the jersey was the long way home from London to Belgium. It was raining throughout the whole trip trip but thanks to a special jersey the last part of that trip which I had to do by bike was as dry as can be. Obviously the jersey was good luck for me right from the start!

After some hours of sleep I took the jersey to a book sale. The power of the jersey came through again. After years of searching for decent books about baseball and American football in Belgium and coming up empty I finally landed a decent haul. On the picture below you can see what I bought and how happy I was with all the books. Sadly there were no Padres or Chargers books but after all these dry years I'm just happy to find some reading material on baseball and American football. You'll also see that I landed some comics which is a great find as well! 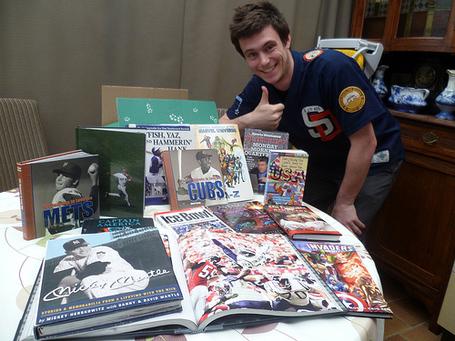 Then it was time for some more touristy trips. I first took the jersey to our capital: Brussels. My first stop out of Central Station was the "Grote Markt", the central square of the city, which is highlighted by the City Hall dating back to the 15th century. 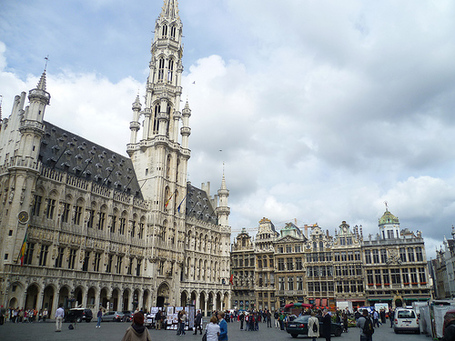 After that it was time for the Jersey to take a look at "Manneke Pis" one of the most famous Belgians. As always there a lot of people flocking around Manneke Pis but I managed to squeeze in and take a picture. I don't really know why he is so popular though. My guess is that people love the fact that he's been pissing in public for more than 6 centuries and still hasn't received a single ticket from local police men. 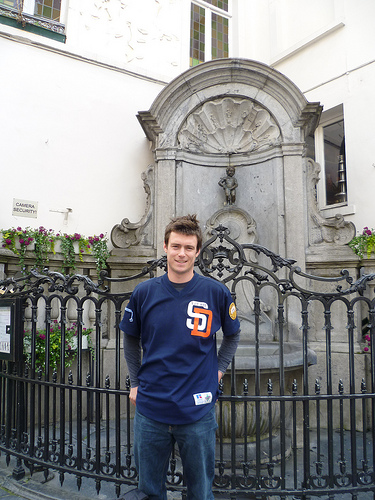 Next stop was another small statue near the Grote Markt. It is said that rubbing this statue of Everaard t'Serclaes is good luck for at least a couple of years. Unfortunately the real thing was being restored so I had to make do with a plaster replacement. Still with the way I rubbed that replacement (twss?) the Padres should be good for couple of years. 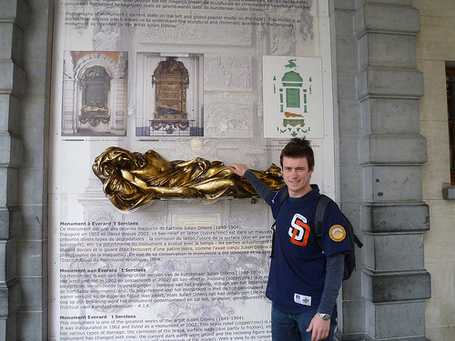 After that I visited one of the many beer shops in my country. This one was called the Beer Temple so I simply had to take the jersey inside. 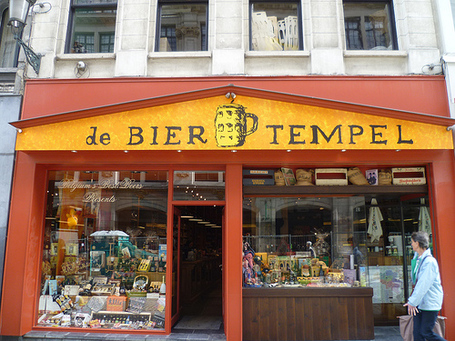 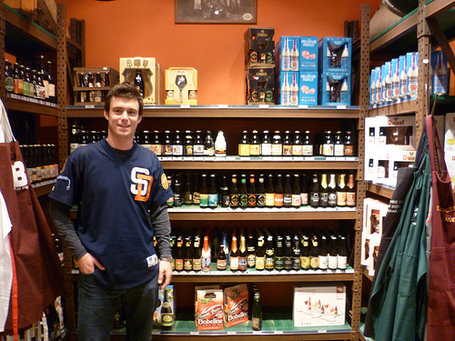 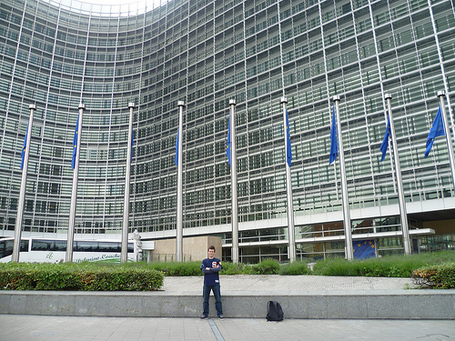 For my final stop in Brussels I took the subway out of the city centre. This brought me to "Den Heyzel" where Belgium hosted the Expo 58 also known as Brussels World's Fair. The most iconic remnant of this Expo has to be the Atomium. A huge iron construction that consists out of 9 metal balls with a diameter of 18 m/60ft that are connected via steel pipes. The design is a referral to the atomic structure of iron, a metal that was the sh*t in 1958. The building is not only very cool it also quite impressive when you are close to it. The metal ball on the top of the welcome picture gives you an idea about how big they are. 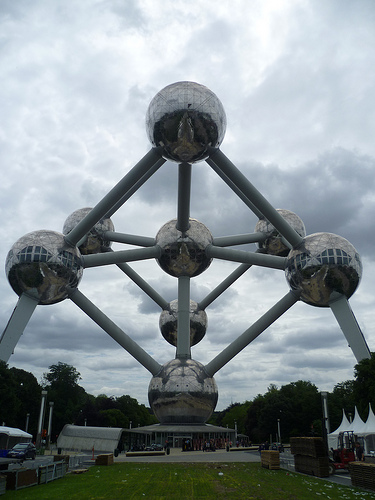 After the capital it was time for the jersey to go to another big Belgian city; Antwerp. Me and the jersey arrived in the beautiful and grand Central Station. I even believe that a picture of this station used to be a desktop picture in Windows 98. I tried to grasp this beauty in a couple of pictures but I'm afraid that didn't work out as well as I hoped. I added them anyway... 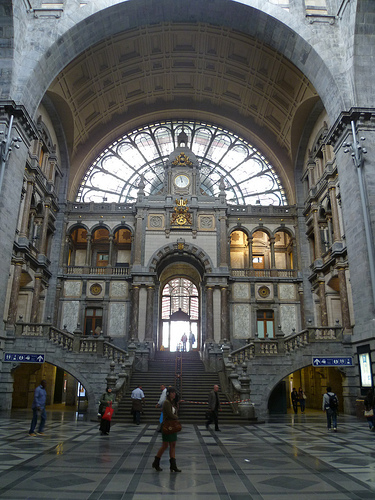 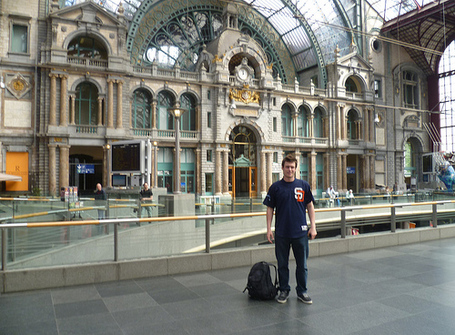 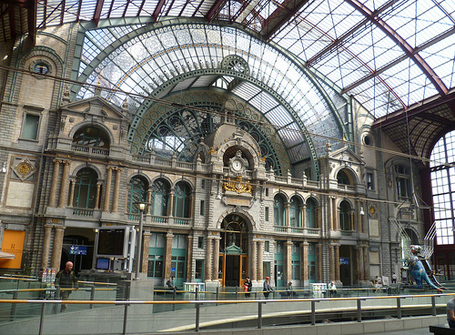 A statue of Peter Paul Rubens, probably the most famous Belgian painter ever, was next on my to do list. I asked a German family to take a picture of me and one of the daughters realized there was something magical about the jersey I was wearing and she was drawn to it. Therefore she insisted on joining me for the picture. On the left you can see a sneak peek of the Cathedral of Our Lady. 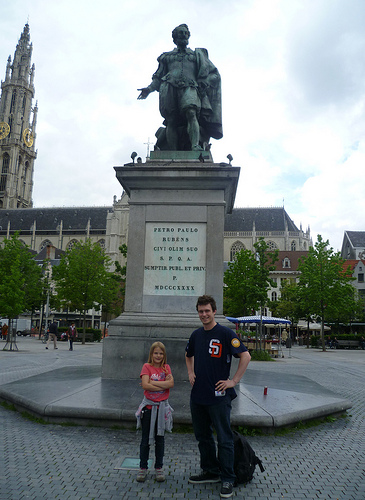 With the Cathedral being so close by I had to go there to take a picture. You will notice that the Cathedral looks rather asymmetric with only one tower that is fully finished. In Antwerp we say that this is something that makes our Cathedral unique and more beautiful than all other cathedrals. In reality we simply did not have enough money to complete the other tower during it's construction period that lasted a mere 170 years. 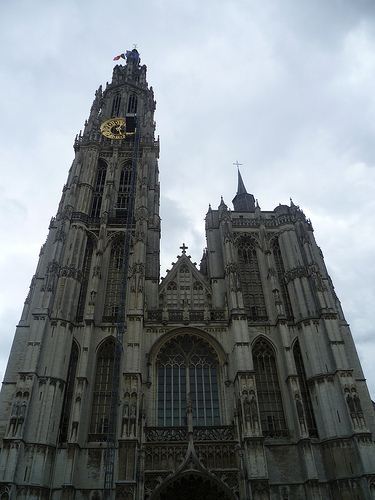 Just a few metres from the Cathedral there is the "Grote Markt" from Antwerp with the city hall and a statue of Brabo. The statue shows Silvius Brabo throwing away the chopped off hand of the giant Druon Antigoon. As the legend goes Antigoon hassled people by cutting of their hands and throwing them into the Schelde(a nearby river) if they did not pay money to him. Silvius then killed the giant, chopped of his hand and threw it in the Schelde thus freeing the city from the reign of Antigoon. This story is used to explain where Antwerp got its name from as throwing a hand is "een hand werpen" in Dutch which is pretty close to Antwerpen or Antwerp. Anyway whenever I see that statue I can't think about anything else than a guy throwing a baseball... 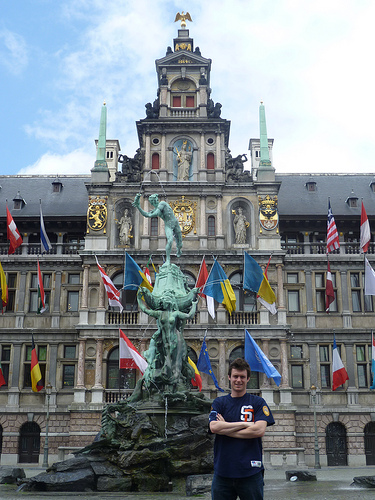 After all this walking around me and the jersey really needed a break so we headed to Paters Vaetje, the bar with probably the most different kind of beers in Antwerp. The jersey and I treated ourself to a Gulden Draak which is hands down my favorite beer ever. Paters Vaetje is really a great, cosy small bar that is simply a must visit if you ever come to Antwerp. Should you ever head out to Belgium let me know and I'll buy the first round(s)! 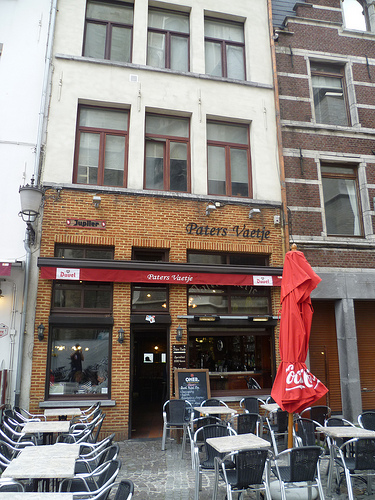 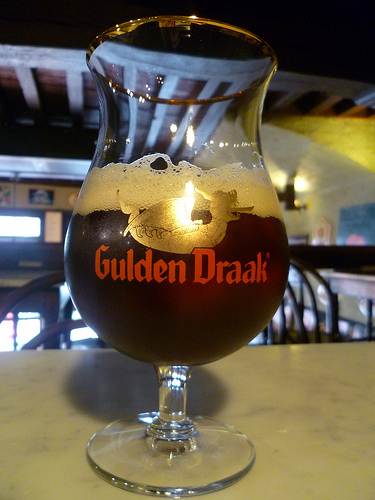 This pretty much concludes my Sisterhood story. I wanted to take the jersey to a baseball game but unforunately the game was rained out :(. I'll try to make a fanpost of another game in the (near) future. Wearing the jersey made me feel proud to be part of a great community like Gaslamp Ball. Every time I had to explain to concept to someone they looked at me weird but I simply felt sorry for them as they could not grasp the amazingness of the jersey and the whole project. All in all it was really a great experience to take the jersey around Belgium (or 2 cities at least). I hope you enjoyed it!

As my final touch to the jersey I added a patch with the help of Missus Sixpak... 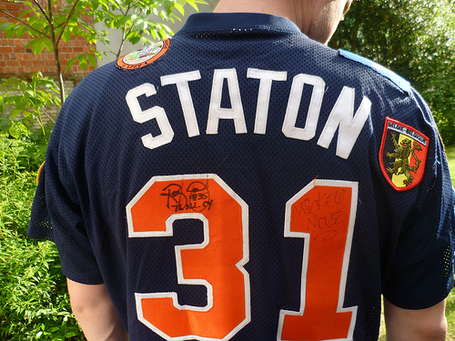