Last week I wrote about how I felt the Fox Sports San Diego broadcast stage was overtaking the Tony Gwynn monument beyond centerfield. Fans overwhelming voted that it should eventually be removed to restore dignity to the Gwynn statue.

TODAY THEY'VE REMOVED THE STAGE! HOORAY! WE DID IT!

But next week they'll rebuild it. Boo.

Apparently the Padres removed the stage temporarily for a corporate event that will take place in the Park at the Park tomorrow. Grounds crew and event staff are working hard to re-sod the area just for the party. From the looks of it, no one will ever be able to tell that a stage once sat there, looking all tacky. 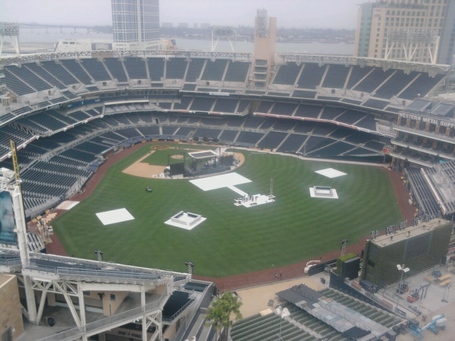 In related news we're told Tony the Gwynn himself will soon be broadcasting from the rebuilt stage. He's said to be looking forward to broadcasting from the area and being able to look upon his likeness as he does it. At least we've learned that he doesn't have a problem with the stage desecrating his tribute.

We've also learned that the stage can be removed on a whim if necessary, good to know.