Foul ball lands in Padres fan's beer, on leave from Afghanistan, he chugs

Share All sharing options for: Foul ball lands in Padres fan's beer, on leave from Afghanistan, he chugs

Last night a foul ball bounced into a Padres fan's beer. With the Padres unable to break the game wide open on several occasions (looking at you Chase Headley) and leaving 19 players on base, a ball and a cup of beer was all the entertainment we needed.

Sure craft beer nerds won't like that I singled out their favorite player Chase Headley or the fact that the beer in question seems to be of the light domestic variety (UPDATE: it's Stella Artois), but sometimes that's just how the ball bounces.

The proud Padres fan raised his glass to the crowd to the delight of many. He's a military member on 15 day R&R from his post in Afghanistan. Like any good American would do if he was participating in a game of Beer Pong he chugged the beer like a boss!

Beer flowed into his mouth and down his face until the ball touched his lips. 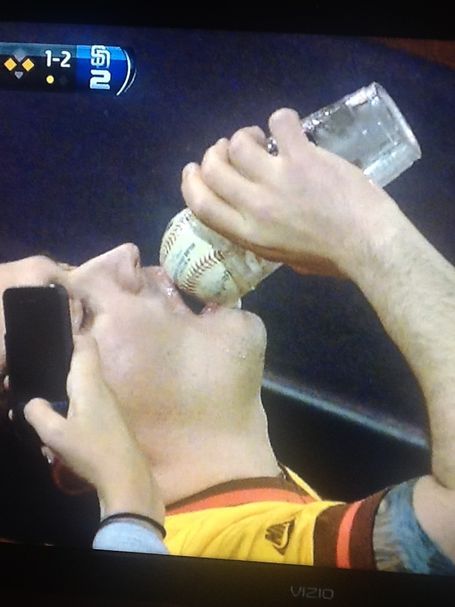 Coincidentally that's the same face I make when I have balls resting on my chin.