In this addition the Jersey takes a look at the history of San Diego and the namesake of the team we all love.

Wonder why the Padres are like a McDonald's? Find out after the jump...

It was around 4:15 on Wednesday May 2nd and I was sitting in the McDonalds off Villa De La Ville in Del Mar, watching the Padres game track on my phone. I was eagerly awaiting the Avenger-In-Chief to bring the Sisterhood Jersey.

I began surveying my surroundings and I heard an upset woman having some choice words for the employee at the cash register. I couldn’t help but relate this to the many upset Padres fans I have seen yelling at the team at the games recently, but the similarities didn’t end there. Both had a low payroll, both were in the process of remodeling and both had some good prospects working their way up the ladder. Not long after the women calmed down, the Padres had a 3 run inning capped by Cameron Maybin’s bases loaded single. I knew that this meant one thing, the jersey was approaching…

I peered out the window and saw her in all her glory, valiantly carried by AIChief. We exchanged pleasantries, discussed the history of the jersey up to this point, what the future held for it and went on our way. I returned home and promptly watched the Padres win their first series of the year behind the ageless Jeff Suppan.

After the game ended, the jersey and I paid our respects to a true San Diego Legend. 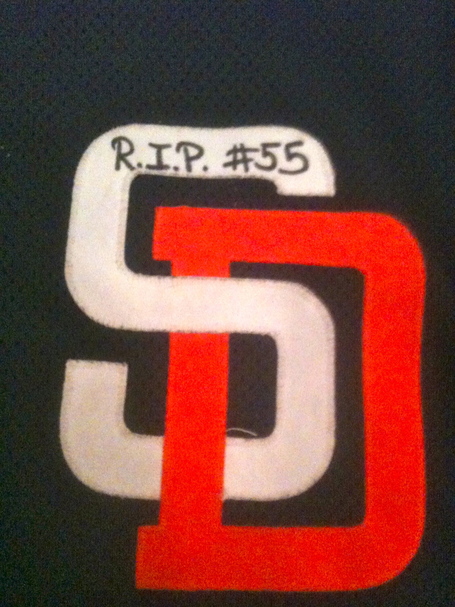 The tragic passing of the great former Charger and amazing person, Junior Seau hit many people very hard. A true local legend and a great community leader, Seau will forever be missed and his family in our hearts and prayers. That night was pretty mellow as I went to En Fuego in Del Mar to watch my friend, Tolan Shaw, play a show and spread the good word of the jersey.

In honor of both the Cinco de Mayo weekend and the roots of the Padres, the jersey accompanied me to Mission Basilica San Diego de Alcala. The mission was founded July 16, 1769 and was the first mission in California. We toured the grounds, saw the true Padres colors (Brown) and got a little history lesson along the way. 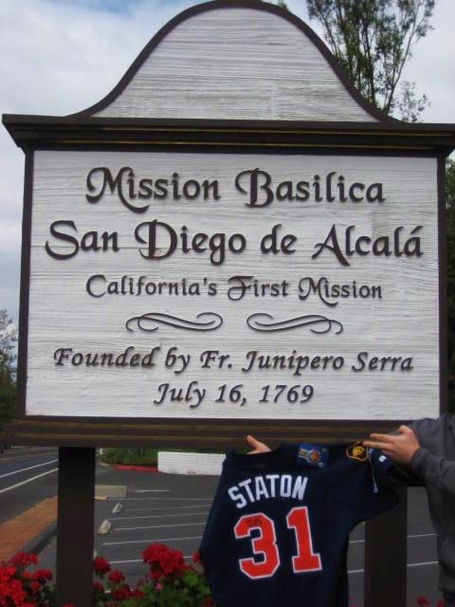 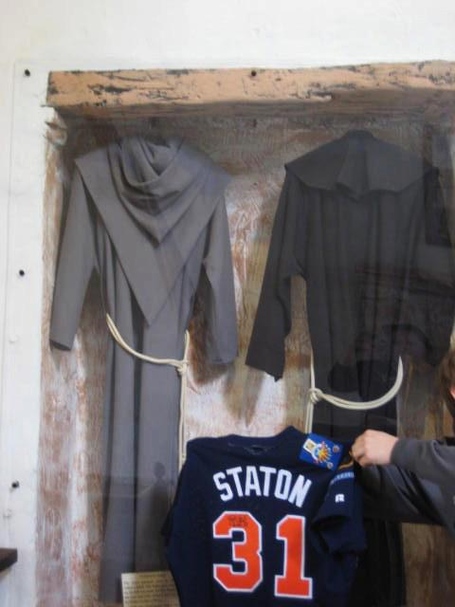 I posed for a picture with Padre/Friar Serra and checked out the Ewaa-Kumeyaay hut similar to the ones used by the local Native Americans. 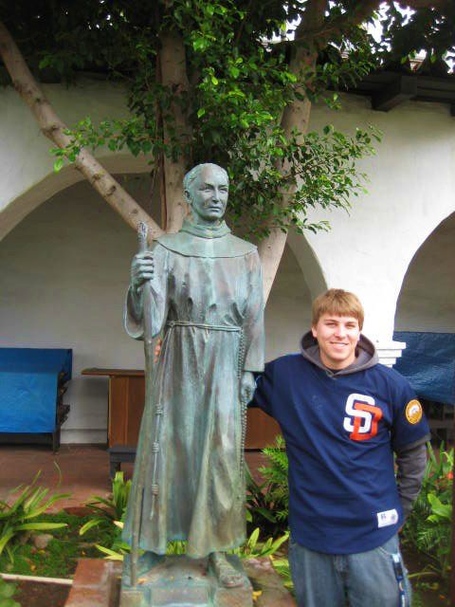 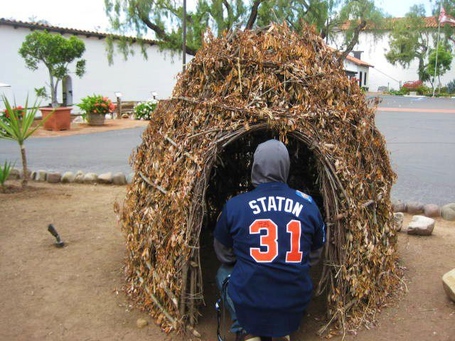 The final stop along the way was to the camanario or bell tower. To commemorate the trip I attached a patch from the mission. 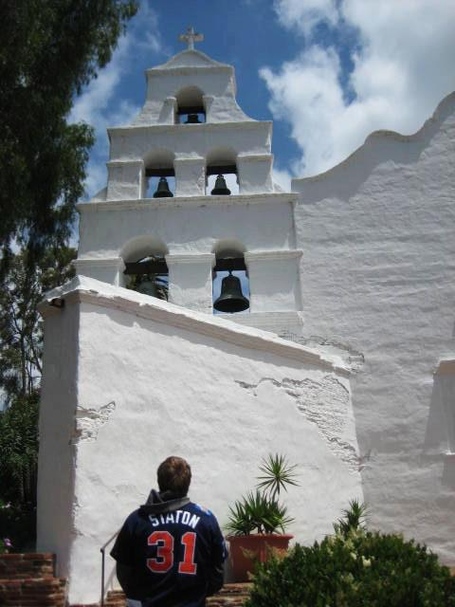 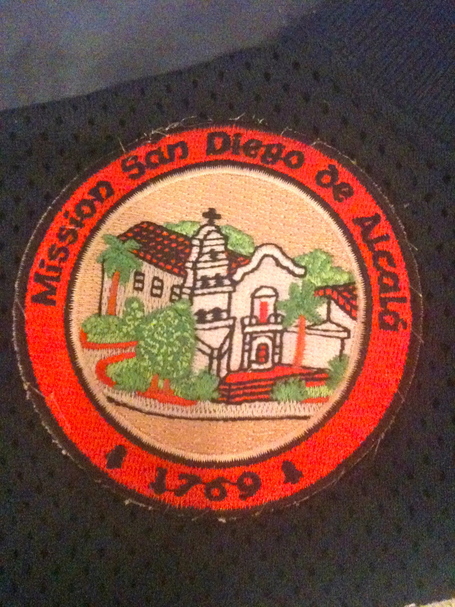 Friday night, some friends and I took the coaster down to Petco a little earlier than normal to attend the Cinco de Mayo party in the park. After getting in line for some carnitas tacos, I saw someone approaching, it was none other than Nater Tater.

We talked a little while about the jersey’s travels and other Padres stories and then Nater mentioned the that he didn’t think he would ever see the jersey again. As he looked the jersey over I couldn’t help but see the longing in his eyes for the times they shared, it was reminiscent of Bilbo Baggins from Lord of the Rings.

We parted ways and took our tacos to our seats to enjoy the game. While at the game I met several other Gaslamp Ballers and was honored and a little creeped out by the pictures of the jersey from the game on twitter that I was not aware were being taken.

The game was not a typical Padres game, as the Padres were able to battle back twice, featuring an Anthony Bass bases clearing triple and a Heath Bell blown save. Sadly, after the 11th inning ended around 11:30pm, I had to leave to catch the last Coaster to North County leaving at 12am (I hate leaving games early). Naturally, the Marlin’s went on to win the game by scoring the winning runs in the 12th inning, right after the jersey had left the game (I take full responsibility for the loss and apologize to Padre Nation). 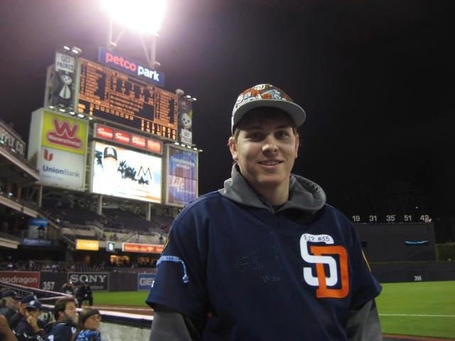 I took it easy Saturday (which wasn’t easy since it was Cinco de Mayo) and just watched the game on TV (hooray for Cox) because the next day the jersey and I had a big day.

Sunday I awoke at 4:50am got ready and the jersey and I ventured off to Westfield North County Mall. The mall parking lot was the starting line for the Safari Park’s 2nd annual half marathon. At a little after 6:30am the jersey and I embarked on a 13.1-mile journey ending in the heart of the park formerly known as the Wild Animal Park.

The course was fun but pretty challenging, featuring many elevation changes, 2 large hills and some music and animals along the way. The jersey and I were successful in a little over 2 ½ hours and lucky for the future sisterhood wearers, the two undershirts I wore beneath the jersey kept it pretty dry (and hopefully not unbearably potent smelling). 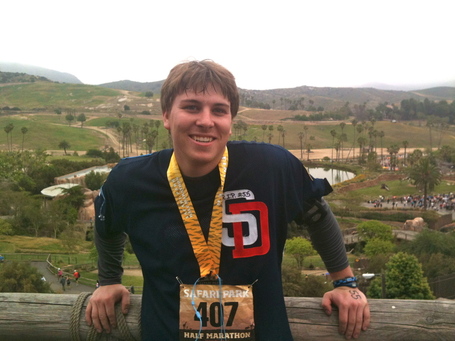 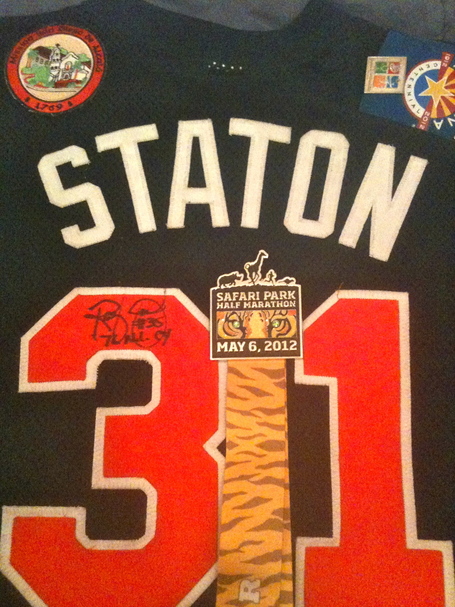 Following a very unproductive Monday featuring lots of ice and plenty of time in the Jacuzzi, Tuesday night the jersey and I headed to Surf bowl in Oceanside for 25-cent games. Of course the power of the jersey allowed me to bowl my highest score to date, a 178.

Wednesday night we headed to the Del Mar Fairgrounds to watch Cirque Du Solei’s new show, Totem. The show was amazing, truly mind blowing some of the stuff people are capable of. If you get a chance to view the performance I highly encourage you to attend. 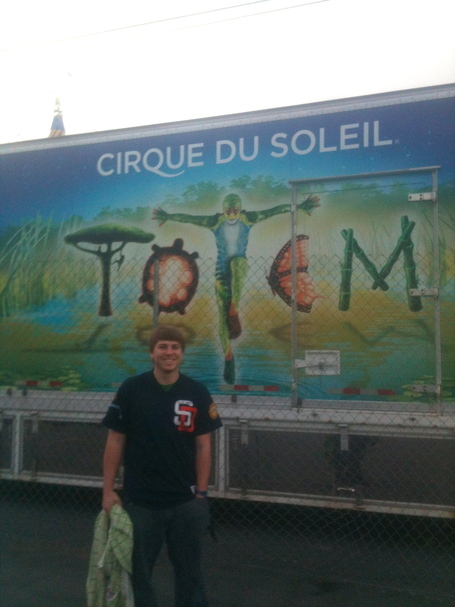 Sadly, I reached the end of my time with the jersey and off to the post office we went to part ways. Thankfully our faithful leaders at Gaslamp Ball had me send Dex the jersey so they could ship it off to its next destination without me having to foot the bill. Off to Europe!

My time with the jersey was very memorable and I got to meet a lot of great people and answer their questions/spread Padre cheer along the way. I encourage everyone to participate in the future but I will leave you with a warning. As I am sure many others before me, I experienced a similar Lord of the Rings power that made giving up the jersey harder but all the more memorable. I am proud to be part of the Sisterhood.