My first trip to Fenway Park culminated with a trip to a seedy gentleman's club and a mad dash during the early morning hours to find Thoreau's Walden Pond. We failed in our quest. It's bound to happen in the midst of a 12-hour bender when one depends on a tollbooth attendant for vital literary information.

What I came to find on that trip, or perhaps what I already knew, was that literature and baseball share an inextricable link. 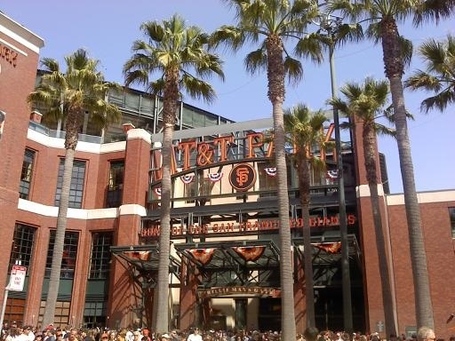 The trip to San Francisco as part of the Sisterhood of the Traveling Jersey would be no different.

"It was like falling down an elevator shaft and landing in a pool full of mermaids."

It wasn't the first time I had been with Dave Staton's #31 jersey. I had been in its presence back at Spring Training with SDPads1 and Geoff of Ducksnorts. As we returned from Peoria we discussed some fun things to do with the jersey, as I knew I was scheduled for indoctrination into the Sisterhood at the end of April.

Geoff suggested a visit to old Seals Stadium in San Francisco, if it even still existed. As someone with an appreciation for the Pacific Coast League it was one of the few destinations I decided to plan during the trip.

I quickly found that the stadium no longer existed, that it was demolished in 1959. The location for Seals Stadium was bestowed with a landmark on a sidewalk and the site of home plate allegedly stood in the aisle of an Office Depot. The park was the site of games played by the San Francisco Seals, and Mission Reds (aka San Francisco Missions) of the Pacific Coast League as well as home to the Giants when they moved to California from New York.

Before the #31 could visit the ancient haunt of the enemy we needed to start closer to home. I took it to Lane Field at the foot of Broadway in downtown San Diego. 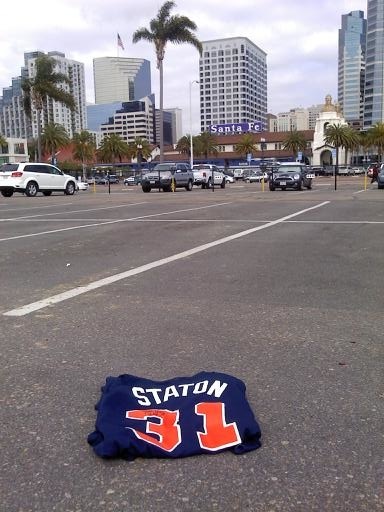 It's a parking lot* overlooking the Santa Fe train depot now but it's a place where PCL Padres of yesterday like Ted Williams once stood with bat in hand.

*Allegedly there's a marker denoting home plate. I couldn't find it. That whole area is a mess.

After arriving in San Francisco via Plane (Southwest Airlines) I jumped on a train (BART) and headed for Office Depot at Seals Stadium. I found the marker on a sidewalk . . . 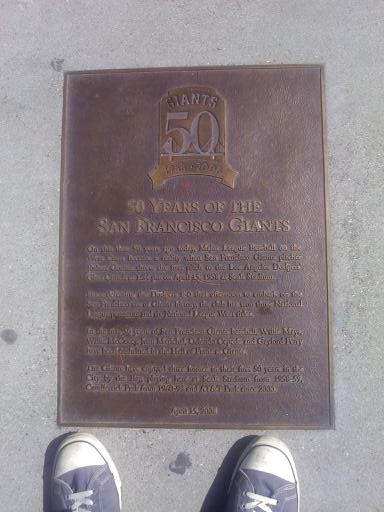 . . . and then headed into Office Depot.

I found the general location of home plate in aisle 6 and then asked an employee to take a picture of me. He refused on the grounds that there was a camera in the sky. He began talking about George Orwell and Aldous Huxley out of the side of his mouth and I pretended to listen. As he lamented a lack of privacy for mankind I walked away and began taking off my clothes. I needed that picture of Dave Staton's jersey and if this guy wasn't going to help then I needed to get busy living. I took off the jersey, propped it up on an aisle stack and fired away. 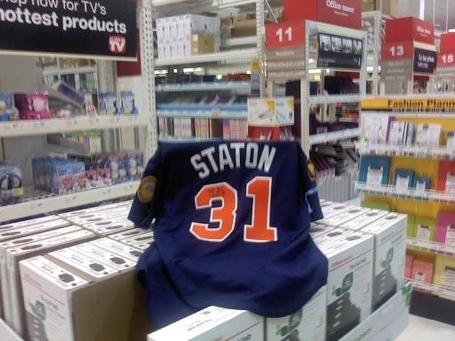 I quickly exited Office Depot and began walking towards AT&T Park. As I approached the park I found few eating/drinking options. I stopped at a place that served a Sierra Nevada to me this way: 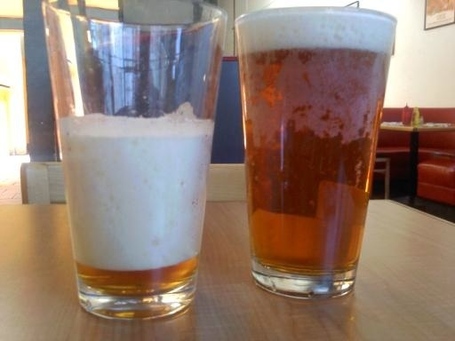 I thought this was weird. San Francisco is often said to be weird.

I left and as I walked up the hill to meet my venerable driver/photographer, Monk Learns, I passed the site of Jack London's birth. The crude building was marked with a bronzed historical placard for the careful eye to see. I thought I would have a chance later during the trip to have ol' Monk photograph me in the shadow of a literary giant but the opportunity had passed.

That night Corey Luebke battled some no name rookie from AAA and I was prepared for a verbal beating from Giants fans. For the occasion I had prepared some passive-aggressive anagrams that would befuddle bay area brutes. Any Giants fan spouting off to me would surely get the fury unleashed.

For instance, groups of angry Giants fans could be greeted with the following:

"A Snow Worn Bible Nostril!" might lead a Giants fan to conclude that I just called him a religious coke-head and ultimately they'd be quite confused. But I would know that I really just said, "Brian Wilson's Torn Elbow." Which is funny. Because Brian Wilson's elbow is torn.

But my all time favorite is, "Fans Giants You Fuck!"

I prepared myself. I was ready!

But the truth is that everyone was pretty nice. For the most part, I received a whole lot of smiles followed by some lighthearted, "boos!". Giants fans were much more gracious in their own home than when they visit PETCO. My anagrams were useless against them.

The game moved slowly and it was cold. But as Giants fans wore their orange ski cap give-aways, I defiantly viewed game 1 with only the Staton Jersey to warm me. 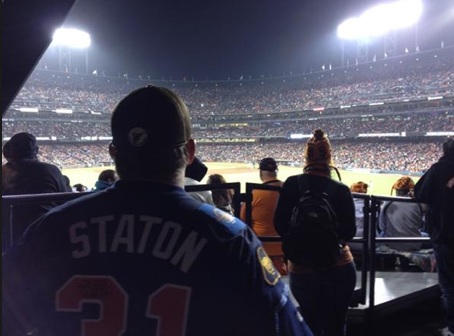 I'll maintain until the day I die that the Padres lead (and Dave Staton's spirit) provided me with the requisite warmth needed for survival. Magic.

Buster Posey's 8th inning blast off of an Andrew Cashner fastball wouldn't quell our moment. The Padres held on for the win and no matter what happened during this particular weekend the Dave Staton Jersey would experience one moment of greatness. 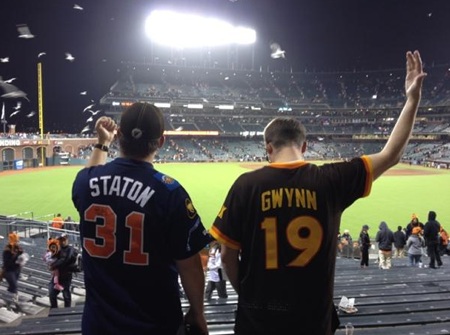 During the heat of the moment I tried to explain exactly how we felt but I think Hunter S. Thompson had said it best.

"The coldest winter I ever saw was the summer I spent in San Francisco."

After a bitterly cold Friday evening we embarked on a beautiful sunny Saturday afternoon. My pal Monk Learns took me out to one of his favorite bars. It was empty. Days with sunshine in San Francisco are rare and on such occasions everyone spends the day outdoors.

We spent the afternoon at the Final Final. 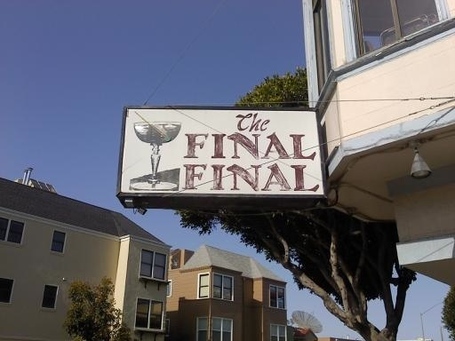 We spent time talking to Arnie who had owned and operated the spot for the last 36 years as well as a lifelong Giants fan parked at the bar. They were good guys, knowledgeable. I wondered if I would ever get to drop a hateful anagram on these fans. 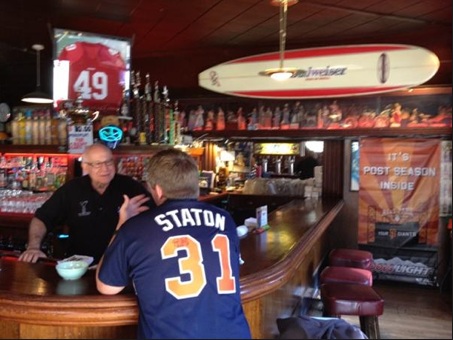 We headed to Pete's Tavern outside of AT&T Park and had a couple of beers. We also met up with Twitter Friend @Jeremy_Nash who erroneously tweeted a picture of my photographer, Monk Learns, but had attributed the likeness to me. I've blocked out Monk's face to protect him from his employers at the [redacted]. 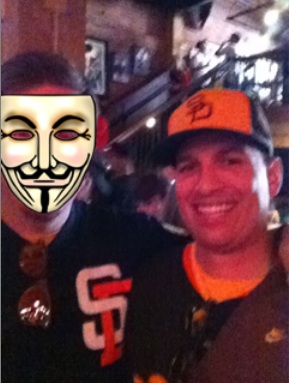 Meeting up with Padres fans in another town is a special moment. I mentioned this idea over Twitter the night before but it bears repeating. Seeing a Padres fan is like becoming a central character in Chuck Palahniuk's Fight Club. You look at each other in passing. And you share an all-knowing head nod. And then you break character and you hug this person you've never met. Because that's just what you're supposed to do. It's a special moment and I advise any fan to make the trip to an out of town ballpark just for the Fight Club alone.

AT&T was cold that Saturday night. Just ask Anthony Bass. Bass refused the cold winds of the bay by mowing down the Giants line-up to the tune of what seemed like 5 pitches an inning. As Bass skipped through the line-up I added layers of clothing. Like I said, it was cold. I think the weather on Friday night was colder but the magic of the #SotTJ had protected me. As the magic subsided on Saturday and the Giants stole a win from Anthony Bass I marveled at the young ladies who endured this game in short sleeves. 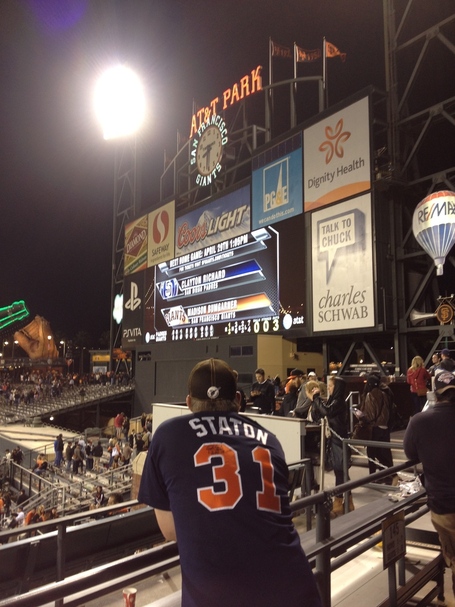 Clearly those beautiful young ladies paid no mind to the musings of Twain. And the Padres lost 2-1.

"The beauty of things must be that they end."

Before we appeared at AT&T for the rubber match we headed to a couple of landmarks.

The spirit of Dave Staton headed over to China Beach and admired the Golden Gate Bridge in its foggy glory. 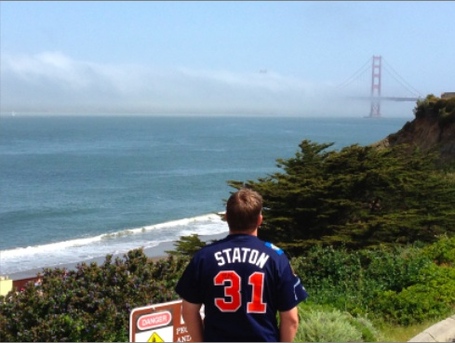 Then we headed over to Vesuvio, a literary staple found in North Beach. Vesuvio was a spot where beat writers like Kerouac and Burroughs spent time drinking and writing manically. 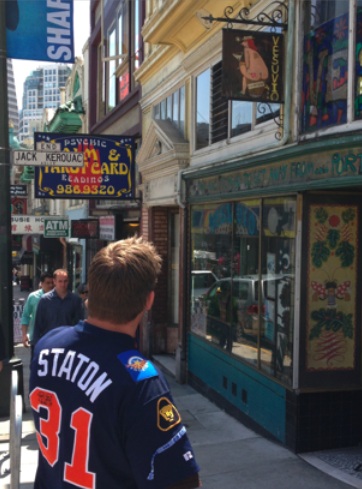 Ironically enough our bartender looked like Mark Twain. He recounted nights of debauchery with a patron who looked about as hipster as one could get. And then each broke into knowledgeable conversation about the Giants. It was refreshing to hear people who looked mildly against type discuss baseball with intelligence. 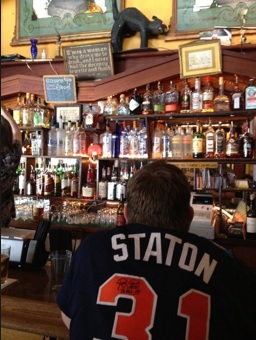 The place is an inspiration. The establishment moved me to write a poem about Will Venable and how he should be blamed for everything. I figured it apropos with him starting against Madison Bumgarner.

"Blame, viLL weNABLe," he screamed into the AT&T night air like a fireman going to a window that has no fire... except the passion of his ridiculously fanatical heart.

We took a picture of the famous City Lights bookstore next door to Vesuvio and headed out for game three. 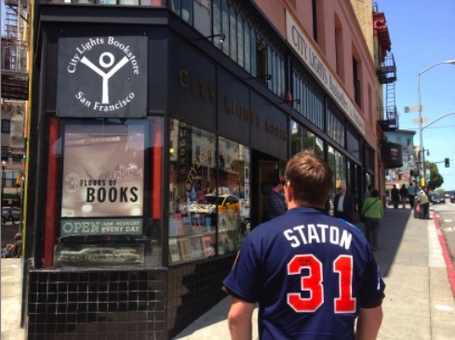 It was a beautiful day and we never made it to our seats, instead opting to take in the game while doing a tour around the concourse. We saw far fewer Padres fans on the Sabbath (naturally) and Madison Bumgarner did well to hold the Padres in check.

We made our way over to McCovey's Cove just in time to watch the Padres implode. As the boys unraveled I gazed out into the cove and noticed the good time being had by pasty San Franciscans. They have no shame and it's commendable. 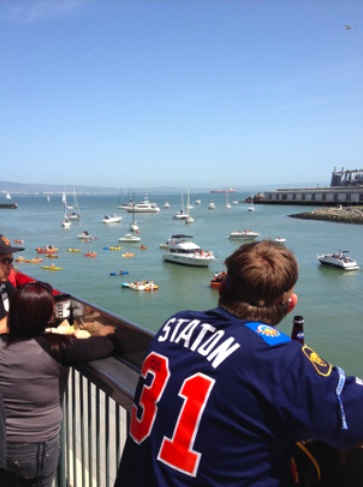 As the game came to an end with a 4-1 defeat for our Padres, we wandered over to Willie Mays and paid homage. 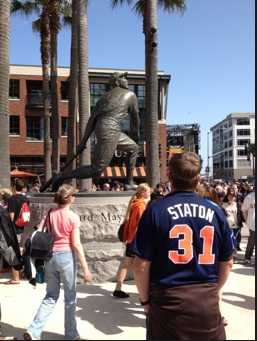 After the game we headed over to the famous hippie district of the 1960s: The Haight. Here I got clever with a bar coaster and a piece of paper in an effort to express my feelings on losing the series against the Giants. 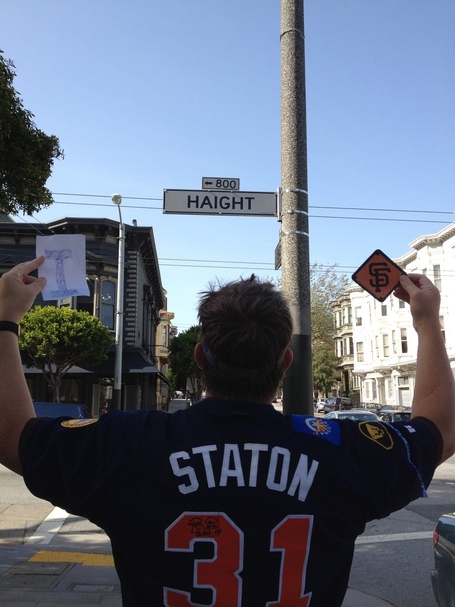 We wandered around The Haight searching for the perfect patch for the #SotTJ and found it with some Grateful Dead inspiration. 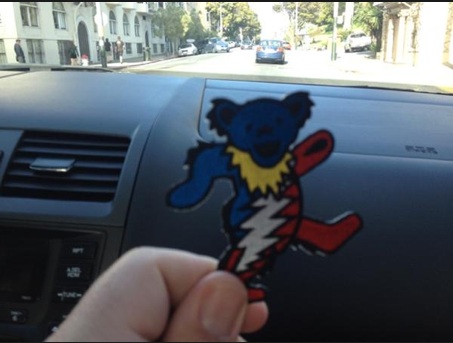 After procuring the patch we visited a bar called Danny Coyles on Haight St., which Monk frequents during the football season. 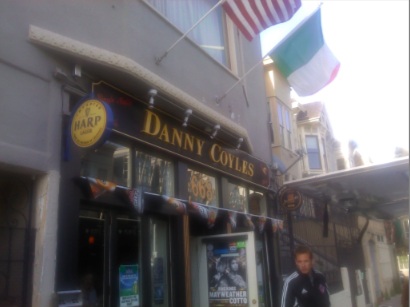 Danny Coyles is a special kind of bar for San Diegans who now call the Bay Area their home. 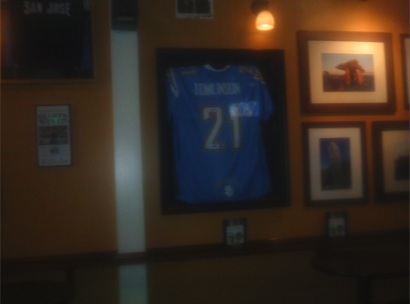 Go to Danny Coyles and be in San Diego.

As I prepared to board my flight home, I ran into Corey Brock of MLB.com and Chris Jenkins of the UT. I recounted some stories of the #SotTJ and gleaned some interesting commentary from them about the state of affairs in Padre land. Regretfully, no picture of our encounter exists.

On the flight I sat next to Channel 4's Dennis Morgigno. Still outfitted in Dave Staton's #31, and carrying three days of stink, Morgigno paid me no mind. I couldn't be bothered to start a conversation either. I was tired and it was time to let go of this story - all good ones must end.

This is a trip I would certainly do again. It is also bears mentioning that this trip was an impossibility without the generosity of my good friend, Monk. The guy really took care of me and Dave Staton's spirit and I am in his debt (figuratively and quite literally).

I look forward to future tales of the Sisterhood of the Traveling Jersey.