Follow along as we travel to Dodger Stadium (and survive!)

When I first heard about the idea of the SotTJ I thought it would be a great way to get further involved in the Gaslampball Community. I’m a huge fan of the site and a follower of the Padres since I was a teenager listening to Uncle Teddy and The Colonel on the radio (790 AM?) starting in the ‘96 season. Living off at school in SLO followed by a re-location to Orange County I’ve felt rather isolated in my fandom over the past decade, but the blog has been a great avenue for connecting and commiserating with others.

An ominous indicator of things to come, I received the jersey Friday, April 13. I noticed that the jersey has been decorated with a few patches and pins and part of a beer coozy and starting to pick up a musky scent. Of course, no Padres paraphernalia is complete without a Randy Jones signature (on the back). 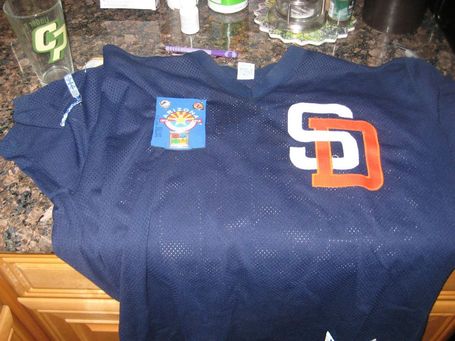 With a 7-month pregnant wife, we don’t get out a whole lot so I rocked the jersey at home on Saturday, April 14, while watching and listening to Vin Scully paint a picture of the Pads losing to the Dodgers.

Sunday morning started off with the first in a monthly series at my church for baseball aficionados (not a baseball-themed service, mind you), this one was led by famed baseball author, Arnold Hano. Arnold has been taking himself out to ball games since 1926 and was sharp as a tack in his presentation at 90 years young. It was quite an honor to hear some stories of the game I love so much from someone who’s been around it for so long.

Arnold wrote a book called "A Day in the Bleachers" about the memorable 1954 World Series game and his view of "The Catch" from the cheap seats at the Polo Fields. That chapter was reproduced in The Fireside Book of Baseball series, along with an abridged collection of that series called The Baseball Reader. Hano would also go on to write a biography of Willie Mays along with his other books on sports figures and events. The 1954 book was also reissued in a 50th anniversary edition in 2004.

I highly recommend reading his work, he was an absolute joy to listen to, and he had some great stories including a chance meeting as a young boy with the Bambino on the streets of New York.

Following church we proceeded to head from Orange County up the 5 to Union Station in LA. Note: parking at Union Station is only $6 and there’s a free shuttle to the stadium that cuts through the horrible traffic. We were parked and at the stadium in about 20 minutes. 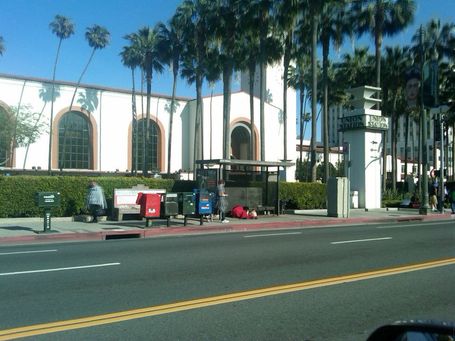 I brought along my wife who grew up in the Los Angeles suburbs and vaguely recalls attending Dodger games as a kid, I guess you could call me a Dodger-Lover-Lover. We got some nice comments from fans about the "house divided" and questions on whether or not our daughter would end up a Padres or Dodgers fan. Being that my wife is a casual fan and I tend to lean more towards fan(atic), my money is on the Padres. 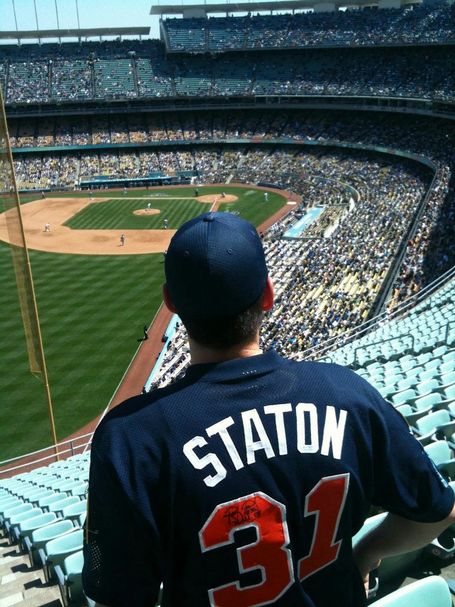 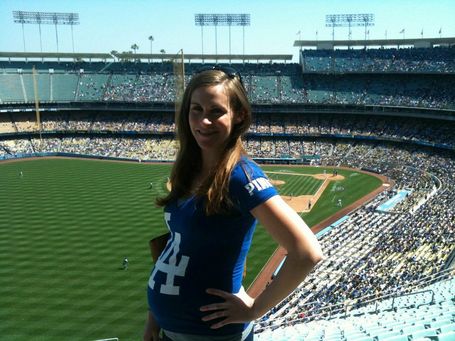 Chavez Ravine, if you’ve never been there, has a strange topography with most of the seats located at the top of the hill up from the field level. We worked our way up to the infield reserve and made it through security with no problems. Apparently security had been escalated for opening week due to last year’s horrible beat down. First task upon arrival, dogs and beer – we got our Dodger Dogs and I scoffed at their crappy beer selection (it’s no San Diego), ultimately settling on Dos XX Lager. 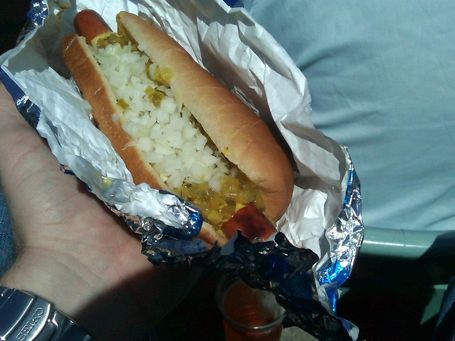 We found our seats a few sections up right behind home plate (my favorite perspective for a game) and settled in on a blissful Sunday afternoon right before first pitch. 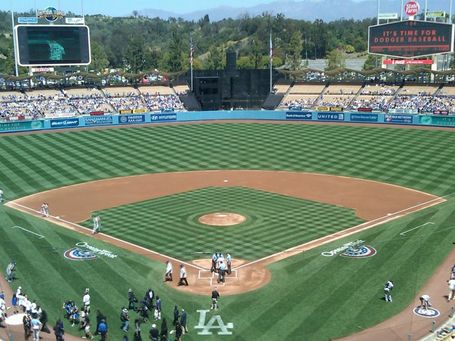 I won’t bore you with all the details of the game, but towards the 7th inning we started to walk the stadium and took some pictures with the jersey. As you can see here, I found the other Padres fans at the game and we all celebrated the Padres rallying to tie the game! 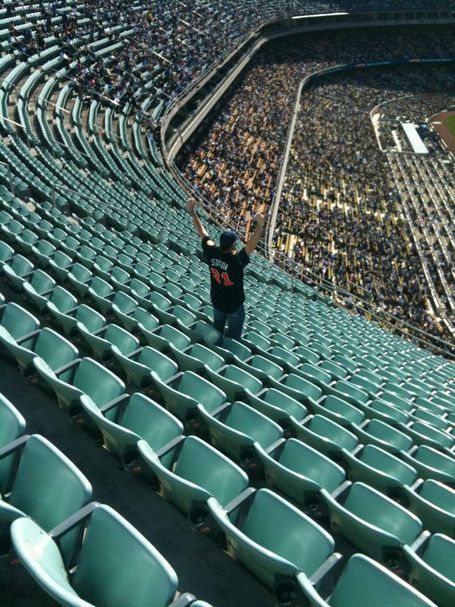 Unfortunately, the rally was followed up by the infamous "triple play" – a hard pill to swallow, especially with what felt like no other Padres fans in attendance. The boys were definitely deflated by the botched call by Dale Scott, "umpire" and let the game slip away to my new arch-enemy, Dee Gordon. He is one of those really pesky players who get under your skin. We’ll need to set him and Kyle Blanks up in an MMA match or something. 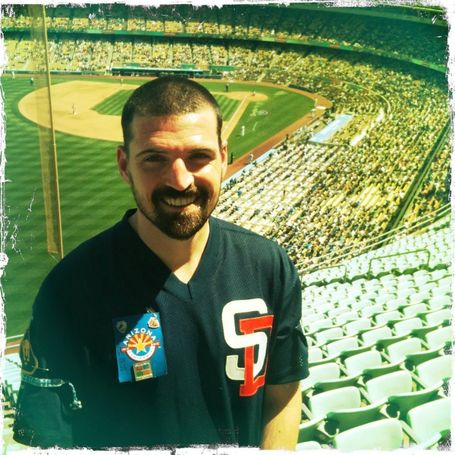 Ooh, hipstamatic. This smile was soon replaced with an angry face after the loss.

I ended my time with the jersey by shipping it off last week from work in downtown LA accompanied with a cheezy Los Angeles patch to join the other pieces it’s picked up along the way. I definitely look forward to watching and reading the progress of Staton’s jersey and hopefully it brings better luck for the next person who wears it. Here's hoping that LA quits! 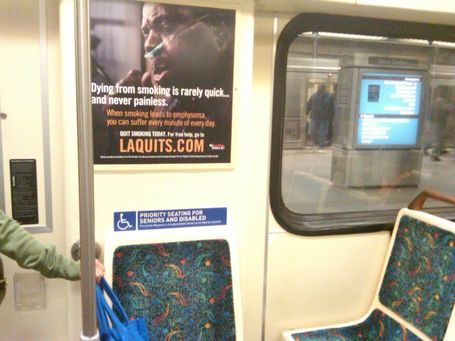 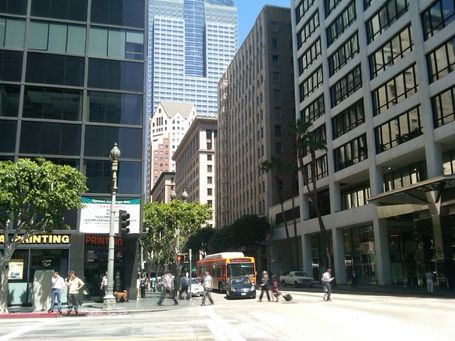 Hopefully the next person who gets the jersey could be so kind as to attach the patch, I unfortunately didn’t have safety pins with me at work.