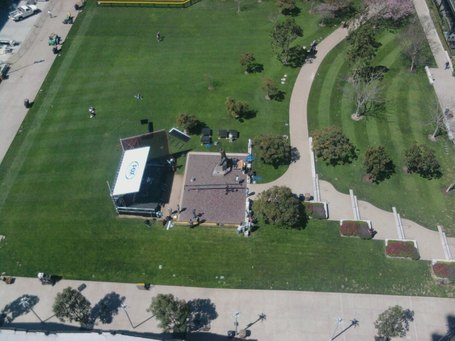 Fox Sports San Diego may not be starting the season on Time Warner and they may not technically have a contract to actually broadcast any Padres games just yet, but they are full steam ahead and have built a stage for broadcasts on game day. Check out the view from the ground here.

I'm told that the stage is "semi-permanent" and that they're working on ways for the scrim on the right hand side to not block the view of the statue of Tony the Gwynn. I'm a little bit surprised at the location since that's kinda prime real-estate for people hanging out in the park on busy days. I would've thought down the hill in front of the candy factory might be better, or just north of the statue as opposed to right in between the statue and the park.

Over the last several seasons, Channel 4 shot their "in-the-park" pregame shows just in front of the batter's eye where the hall of fame plaques are on display to get a field view in the background.

If you're a Mark Sweeney fan, this is where he will be before games.