Introducing "The Pier" at Petco Park

Share All sharing options for: Introducing "The Pier" at Petco Park

The Westwinds Sushi Bar has been replaced at Petco Park. It is now The Pier, a bar with Mexican Cuisine, a cantina if you will. They'll be serving Pacifico, Modelo, margaritas, Bull Tacos, chips and guacamole, ceviche, etc.

Now for the first time ever, pictures inside The Pier. Suck it Sports Business Journal!

Near the entrance is a wicker couch and a sign reading "Respect the Locals". Beneath is a listing of surf sports along the coast. Hanging from the ceiling is what looks like medieval flails or mace and chains. Take note, in case Dodger fan needs to learn to respect the locals. 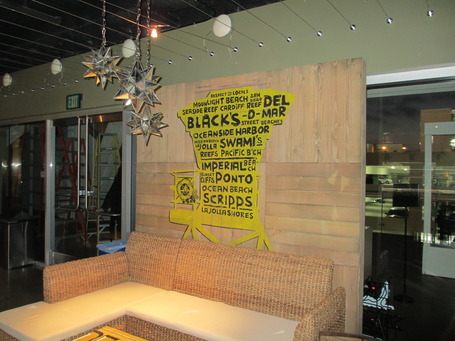 The sushi bar has been replaced by a Bull Taco bar. Last night at the Petco Park Preview they had Lobster and Bacon, Carne Asada and Duck tacos. Dex was indignant when he tried the duck. "THIS ISN'T DUCK! IT'S CARNITAS!" I was thinking to myself, "Jeez, settle down Dex" and I pretended I didn't know him. The only way he could calm himself was by rationalizing that good duck tastes like pig. A moment of weakness fell over me and I briefly forgot it was a Friday and consumed two delicious carne asada tacos. My first slip up of the Lenten season. 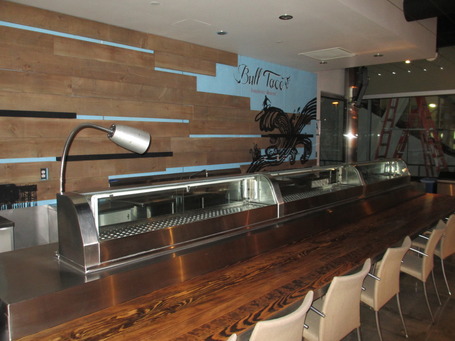 Outside the Pier is a seating area that's first come first serve for fans. They can have a waitress bring them drinks and there will be a street taco stand in the corner. If you get there early it'd be an easy way to "upgrade" to the Toyota Terrace level. 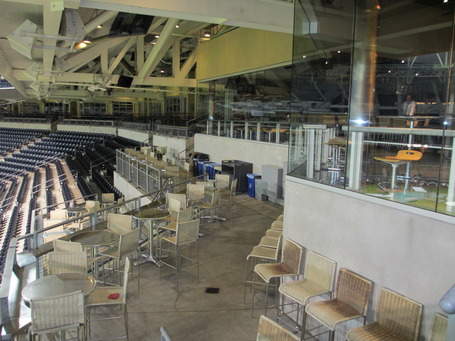 Word is they will eventually make the windows slide open so that on warm nights the breeze will blow through as you chow down on chips and guac.

I'm not sure about pricing, but I could definitely see myself spending some time out on the deck, sucking down street tacos this summer.