Share All sharing options for: First look at Hodad's at Petco Park

Dex and I attended the Petco Park Preview Night for media. The Padres let us preview new foods, new giveaways and take batting practice on the field.

Midway through the night we took a break from playing catch in right field and enjoyed some gelato. It just so happened we stood next to a really friendly guy named Mike with gauged ears, tattooed sleeves, a silver beard and matching silver tooth. He was wearing a new Padres jersey, some Chuck Taylors and shorts. After some small talk about the Padres we asked him what he did for a living, even though I was pretty convinced he must work for a local rock radio station by his appearance.

He presented his fists to us with a big smile on his face. Across his knuckles was tattooed "Boss Man!" He was the owner of Hodad's. Just moments earlier I had to pull Dex away from the food to play catch but not before he had managed to grab a mini burger from Hodad's and brought it out onto the field, putting it in his mouth every time I threw him the ball. We told Mike how much we enjoyed his burgers and had just tried his downtown location a few weeks ago for the first time. I told him my only complaint was that I physically couldn't fit their double cheeseburger into my mouth, much to his amusement.

Mike told us that Hodad's would be serving their entire menu at the Park except for shakes due to the metal containers that they make and serve them in.

Seeing our genuine interest in all the details of the new location at Petco Park, he whipped out his iPhone and showed us pictures of the interior. It wasn't too much later that we got a private tour of the restaurant where it sits above the PCL Club. 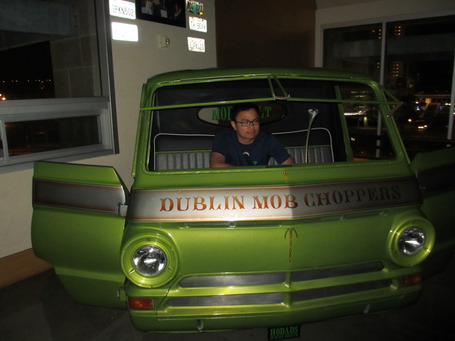 Like the location in Ocean Beach you can eat at a table inside a car, but instead of the classic Volkswagen Bus, Petco Park has a vintage Chevy Dodge van. 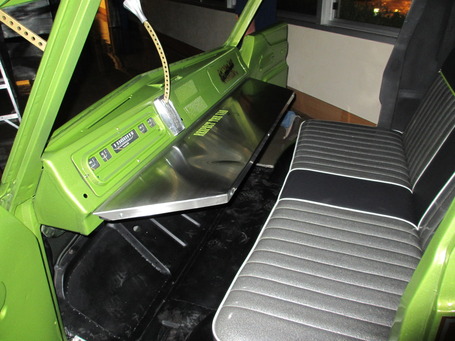 The look of Hodad's at the Park is very much what you're accustomed to seeing at their other locations. That means license plates, surfboards and San Diego. 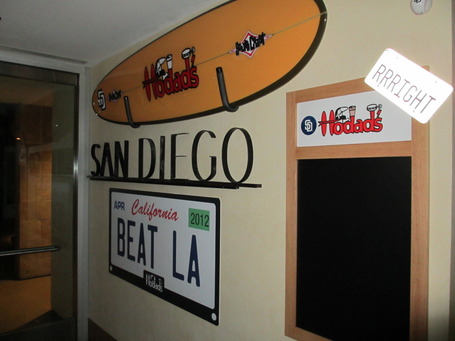 The best part of the new Hodad's location? The menu. 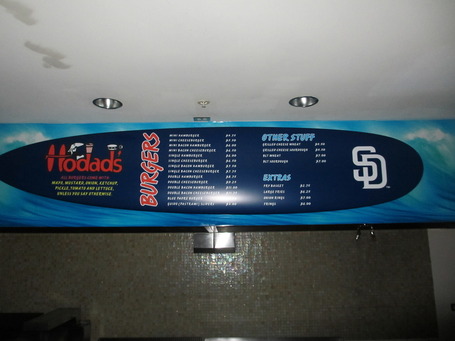 You can zoom in, but the prices are really reasonable, like they're are almost too reasonable for ballpark food but don't tell anyone. I found myself wondering why you'd ever by a $4.00 hot dog when Hodad's is available.

I'm not joking when I tell you that I started salivating when typing the menu. I didn't get to taste the burger last night due to Lent, but Opening Day is just a few short days away.