Share All sharing options for: The Sisterhood of the Traveling Jersey goes to Peoria with the Pad Squad

Since I purchased the Dave Staton jersey at the Padres garage sale a few months ago it's been back and forth on the road between San Diego and Arizona. It's made three trips now to the Grand Canyon state. The latest was with members of the Pad Squad in an unofficial capacity. Since they're employees of the team they get a pass for not writing their own Fan Post of the jersey's travels.

Now it's my job to piece together what happened to the jersey through the pictures they shared with us.

Pad Squad Alicia originally volunteered to take the jersey from the onset, but to save on postage Dex handed the jersey off to Pad Squad Erin at a gym in Santee. For those that don't know, Erin spends a lot of time at the gym since she is an amateur body builder. 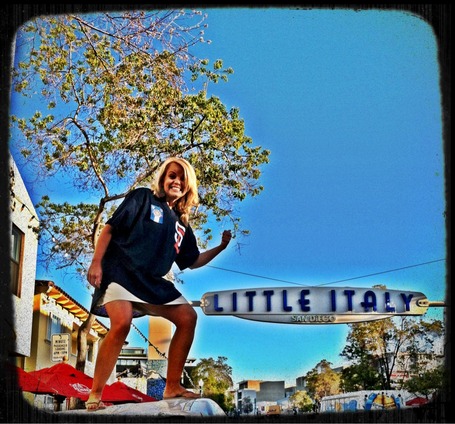 Here we see that Erin car surfed while wearing the jersey, like Styles from Teen Wolf, from Little Italy to Arizona. Despite swallowing a few bugs things were going swimmingly until a run in with the law. As it turns out the police in Arizona don't take kindly to car surfing. They are mean ol' boys. 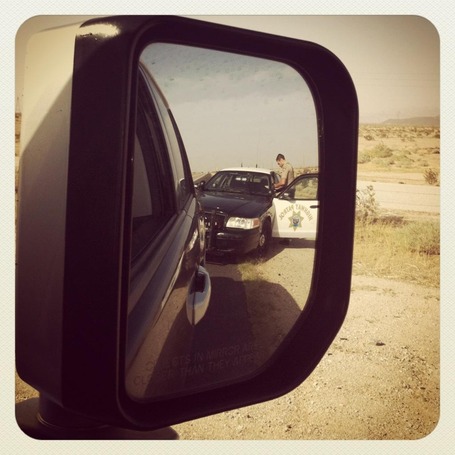 Fortunately for Erin and the rest of the Squad, the police had heard stories of the Sisterhood of the Traveling Jersey on the internet and in ballads sung by migrant workers and treated the girls with great reverence. The policeman pictured let them off with a warning, going so far as to insist that Erin continue to car surf the rest of the way. "Ride on little one... ride on". 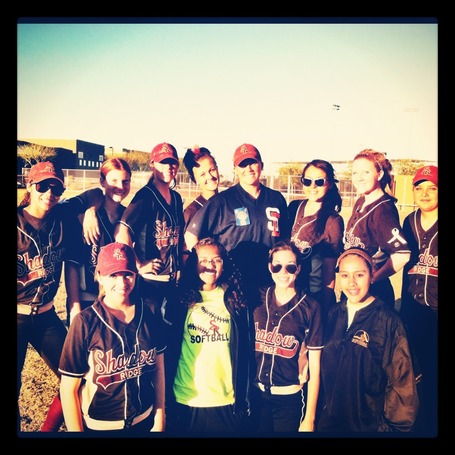 The Squad made time on the long ribbon of blacktop across the desert. When they stopped for refreshments at a watering hole in Surprise, AZ they met the down on their luck Shadow Ridge High School Varsity Softball team, drowning their sorrows.

The team told the Squad the story of how they hadn't won a game in 4 years because they didn't have a proper jersey that would instill a winning attitude in the team. The Squad thought and thought about how they could help them. Finally they suggested that they use the Traveling Jersey and its rumored magical properties to help them win. However when the Shadow Ridge team got behind in the first inning, the Squad stripped them of the jersey telling them that they were soiling the good name of Dave Staton and continued their journey to Spring Training.

When they left San Diego, Peoria seemed like a dream, but they finally made it. They attended Padres games and posed with the Jersey (pictured above). They fought over who would have to wear it and then agreed that they'd just hold it and then stuff it into someone's purse after the photos.

I met up with Erin yesterday after she returned to San Diego so that the jersey could be passed on to the next participant. She didn't tell me any stories of her trip, so I told her I was just going to make them up. Which I did.

I'm really trying not to be involved in transporting the jersey to each participant but it was important that the jersey get to Gaslamp Baller justGWYNNbaby soon. He's taking it on a tour of Mexico for the next couple of weeks. It'll be the jersey's first trip out of the country.

He worked until late so I drove it over to his part of town, wrapped it in a couple of shopping bags and hid it in the bushes near his home. It was a risk, but one that was worth taking since I didn't want to be out until midnight delivering the jersey. Fortunately no bums got a hold of it and it was found safe and sound.

I'm reminded of when justGWYNNbaby was asking me how to hash tag his tweets about the jersey. I told him "Others are using #SotTJ, but you can use whatever you want, it's not like it's going to catch on." He responded "yea and its not like a jersey traveling the globe is gonna catch on either."