Share All sharing options for: Fox Sports SD will show Padres vs Royals on a temporary channel for Cox and Direct TV subscribers

FOX Sports San Diego presents the Padres vs. Royals. Our broadcast begins at 5:30PM with "Padres Season Preview 2012". DIRECTV will carry the lineup on channel 694. Cox will carry on channel 18 in San Diego North and channel 23 in San Diego South. Stay tuned next week for the network launch on COX (Channel 56/HD 1056)

I, for one, am blown away that this has turned out as difficult as it has. To delay the launch of the new channel and everything. I wonder who Fox Sports SD was able to get to advertise for the game? I'm guessing Corky's Pest Control

Incidentally, Fox Sports SD will be having a viewing party as per the flier that Gaslamp Baller kevintheoman managed to steal away from a train hobo downtown. 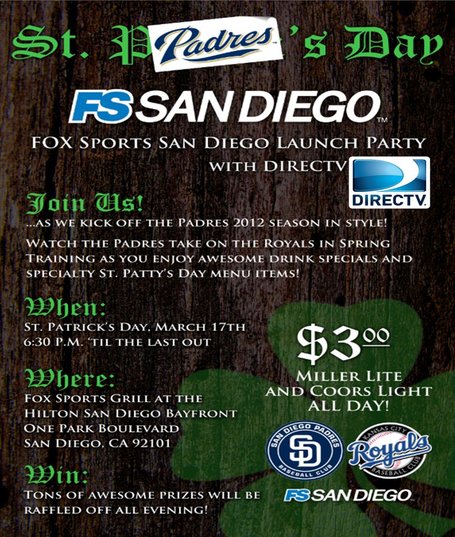 I thought that there was going to be a viewing party at Randy Jones All American Sports Grill, but I see no mention of it on their Twitter or website. I also thought that the Padres would have a proper TV deal by now. I'm guessing that Bud Selig saw Bob Nightengale's numbers of $150 million per year and is now demanding answers as to why the deal is only working out to $20 million. Bud Selig's never one to turn down a buck, except for when... you know... he's actually forcing other people to turn down a buck.

If anybody manages to get photos of drunken Johnny Midnight wandering around in front of the convention center, complaining loudly about Mike Pomeranz being a poser and Mark Sweeney betraying his friendship, I encourage you to FanPost them for the rest of us.