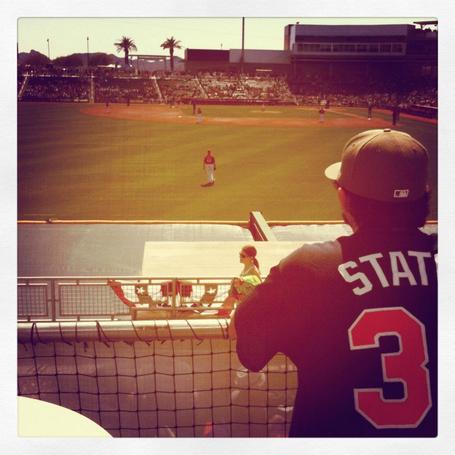 Let me start this FanPost out by saying that, much to my surprise, the jersey fit me great. Which is strange, considering Dave Staton was a big dude at 6'5" and 215 pounds. I am not 6'5", nor am I 215 pounds. Not even close on both. So that leads me to believe that Staton was either:

A) a very odd proportioned fellow, who had legs like tree trunks and a torso that was abnormally small
B) he was very flirty and chose to wear this jersey while showing off his bare midriff
C) plain and simple this jersey is magical and will fit everyone no matter the shape or size

I'm going to go with option C, because the jersey actually fitting me wasn't the only magic that happened during my time with it.

By now you've all read the FanPost that Nater Tater did as the first jersey wearer. I have to admit, he set the bar kind of really ridiculously high with his amazing post and it's rather intimidating being the next in line to write. So with that said I'll do my best to LOWER that bar back down for all you future sisters out there so you don't run into the same problem as me.

I had absolutely no agenda whatsoever before I received the jersey. In fact, up until about 30 minutes before the pickup, I had no clue where I was even going to meetup and acquire said jersey. All I knew was that I was headed out to Peoria for Spring Training and good times would surely follow. Along for the ride was The Avenger-in-Chief of Avenging Jack Murphy fame (and future sisterhood member), Geoff Young of Ducksnorts fame and Marshall of.....uh, that one post that he did for RJ's Fro a few years back fame.

As we were getting close to Yuma, various things were racing through my head. Was this "project" even real? What member of the sisterhood would I portray as I wore the jersey: Serena, Ugly Betty or one of the other 2 chicks? Was Nater Tater going to become far to attached to the jersey, refuse to show up and keep it for himself? More importantly....What was I going to have for breakfast? Speaking of which, we decided to meetup over breakfast at Daybreakers Cafe (10800 North Frontage Road, Yuma, AZ 85365) for the exchange. We sat down, placed our order and in walked Nate along with the jersey. We shot a little video of the exchange and it was around that time that we read via Twitter that Cameron Maybin had signed an extension! What joyous news! It was my first taste of the jersey magic...which tasted a lot better than my rhubarb waffle. 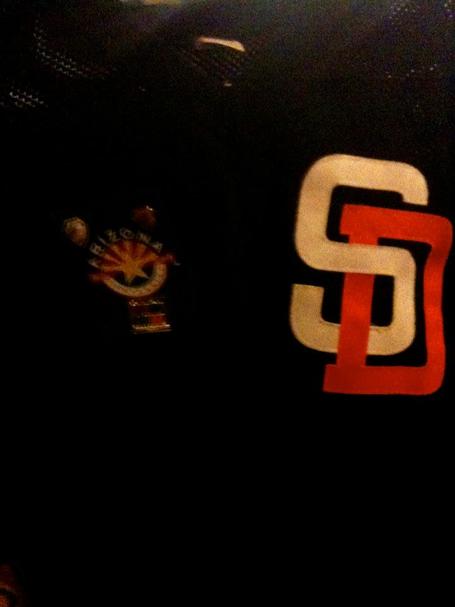 With the jersey now in my possession and a full belly, we bid adieu to Nate to continue our journey. As we pulled away I could see one arm outstretched and a single tear fall down his cheek. Would I be this devastated when I eventually parted ways with the jersey?

After some more driving we finally made it to our destination. It was time to see some actual baseball being played. We refused to watch the hated Mariners take on the A's at the Peoria Sports Complex and we failed to score tickets to both the Rockies/Diamondbacks game at Talking Stick and the Giants/Diamondbacks game at Scottsdale Stadium due to both games being sellouts, so we were left with no choice but to watch a couple of teams from Ohio (Reds/Indians) battle it out at Goodyear Ballpark (1933 S Ballpark Way, Goodyear, AZ 85338).

We not only got tickets to the game, but we also paid a whopping $4.50 per ticket thanks to 2 for 1 Ohio day. Score 1 for the good guys. Shortly after entering the ballpark we hit up the beer stand. When Marshall split off and bought a Coke instead, we asked what the deal was. It was at that time he informed us that he had given up beer for Lent and would not be drinking at all that weekend. A designated driver for the whole trip? It's another Staton miracle!!

After fighting off the evil Ludwickian (see picture at the top of this post of notorious San Diego/Petco Park hater Ryan Ludwick playing LF for the Reds) I ran into Dallas Latos. We chatted for a few innings in RF. I was wearing the jersey at that time but forgot to take a picture. It was Day 1 and I was already dropping the ball. I felt like an outsider among the sea of red and was out of my element there anyways...my bad.

After the game we headed to our hotel, the Thunderbird Executive Inn (15249 North 59th Avenue, Glendale, AZ 85306). We were given our room keys, told that there was a free snack room and, oh by the way, a full on legit Pub at the hotel. After checking out the pub for a few hours, which was awesome by the way, we decided to head into town and went to the Fox and Hound (8320 West Mariners Way, Peoria, AZ 85382) & the Irish bar formerly known as Lis Doon Varna, now called Johnny Fox's (16100 Arrowhead Fountains Way, Peoria, AZ 85382) to complete our "Fox" themed night in honor of the new Padres TV network.

The next morning we headed to the Peoria Sports Complex (16101 North 83rd Avenue, Peoria, AZ 85382) to watch some Padres action on the practice fields. It's always a fun time to get there early and see some of the drills and get to watch a lot of the young kids we have in the system. 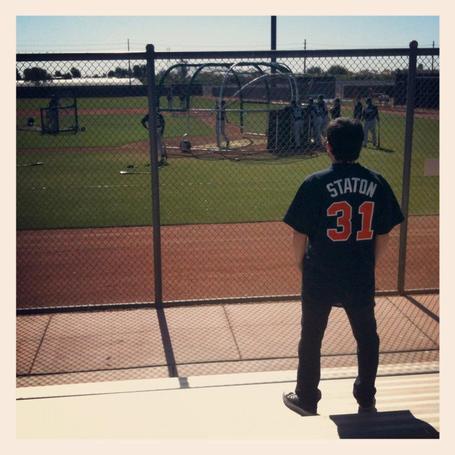 Just noticed that it kind of looks like I'm peeing...I wasn't

After the practices were over we wanted to grab a bite to eat before the big Padres/Mariners Vedder Cup kickoff and headed back to the Fox and Hound where we shot a Padres and Pints episode with Dan Hayes of the North County Times. That video should be up sometime next week and the jersey was worn during the whole interview. I have to admit...Best. Interview. Evar. And I'm pretty sure it was all thanks to Staton.

I may have peed myself during the game when Andrew Cashner lit up the Mariners batters, but I'll leave out all the other details of the game, because it was for charity. Come on guys! The REAL kickoff of the Vedder Cup should start the next day. Right? Let's not bring bloodshed to a noble cause. 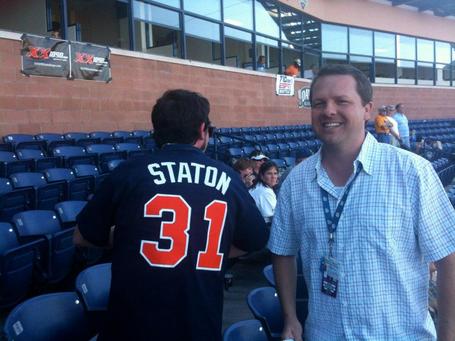 After the game we headed to the Moon Saloon (16554 North 83rd Avenue, Peoria, AZ 85382) and would spend the next 8.5-9 hours at the same location. I kid you not. We actually went through 3 waitress shifts. That was where we started the $1 Bets. Basketball, Hockey & random bar events were never so much fun.

It was there that I also happened to run into Darren Smith, Marty Caswell and Mark Grant. They noticed the Staton Jersey and questioned it. In my mind I was eloquently breaking down the entire project step by step while wearing a top hat and monocle and may have even quoted the teachings of Aristotle at one point. In reality I'm sure it sounded more like "Staton.......Jersey.....Gaslamp Ball.....Awesome....Sisterhood!" as my hair stood straight up like Geoff Blum. I do remember at one point assuming Mud & Darren had seen the "Sisterhood of the Traveling Pants" before and when they said no I acted like they were missing out on a cinematic masterpiece. 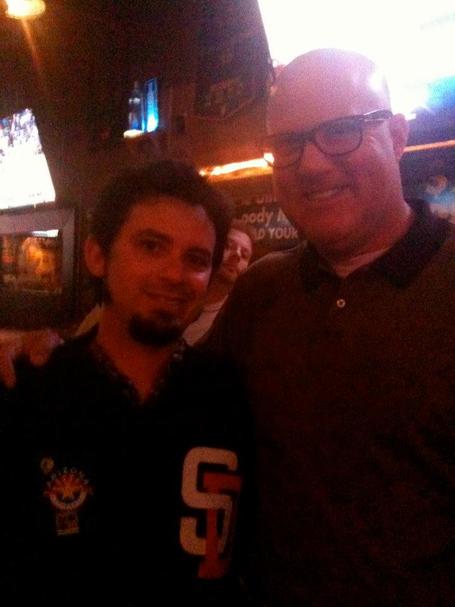 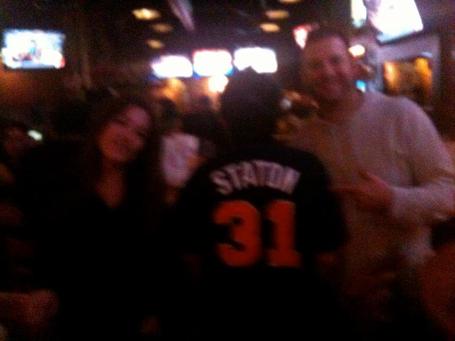 OK, now for reals guise. TODAY is the day that the Vedder Cup kicks off.

Question Padres Fans: If there's one thing you hate more than the Mariners it's......
Nothing is the correct answer. Anything else would be unacceptable.

We started out the day the same way we started the previous day, the practice fields. And as always hunger came a knockin' and to curse those hated Mariners we hit up In-In-Out (8285 West Bell RoadPeoria, AZ 85382) for a little 4 x 4 action.

Finally it was time. This was the real deal. I put the jersey on the creepy kid statue.... 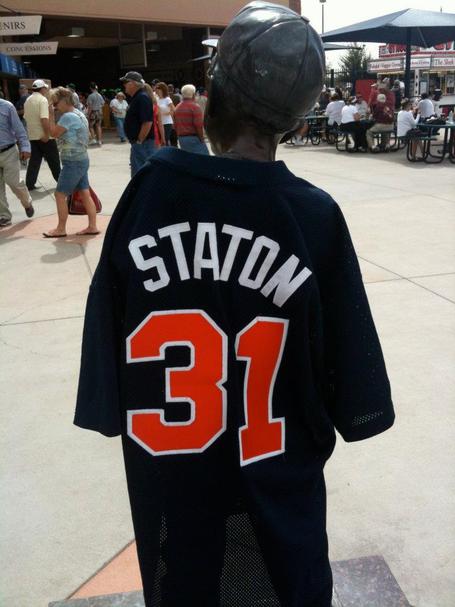 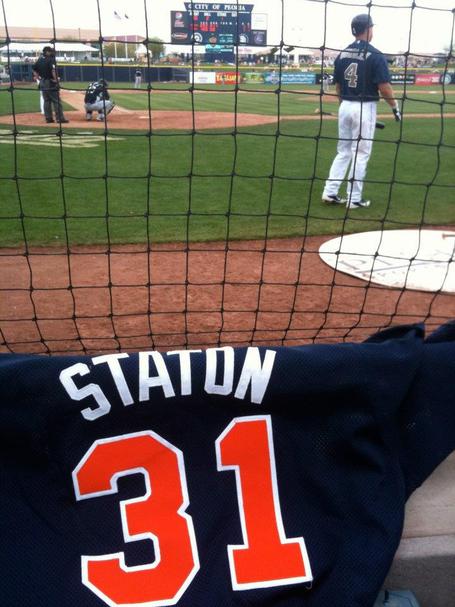 Dick Enberg was sitting right behind us.... 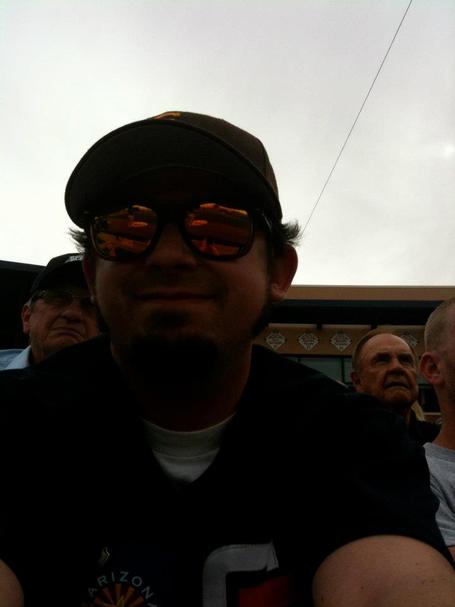 And the Padres lost...again. Let's not count this one either guise. It was Game 1! Both teams need some time to warm up for the Vedder Cup. Right?

It was interesting listening to Enberg talk in person though. In my head I was hoping he'd shout "OH MY!" after a good play at which point I'd turn around and we'd hi-five each other. That never happened though. It was also kind of creepy how he was bleeding non-stop and at one point the usher asked if he was OK only to be told that he cut himself shaving earlier that morning and couldn't get it to stop bleeding.

Our time in Peoria had finally come to an end. We said goodbye to Corey Brock and the rest of the crew and then hit the road back to San Diego.... 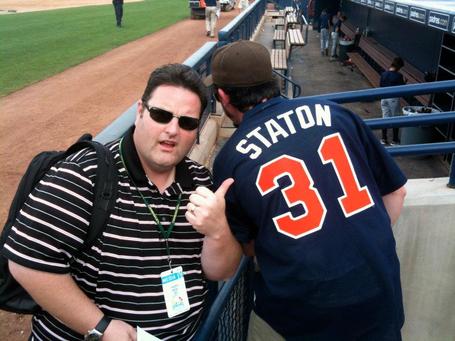 Staton? Is that a new craft beer company?

We made a couple stops on the way home, with the first in Dateland (1737 S Ave 64 E, Dateland, AZ 85333) where I finally tried a Date Shake per Nater Tater's recommendation. My take? It was pretty good early on, but after a while the date chunks grossed me out. 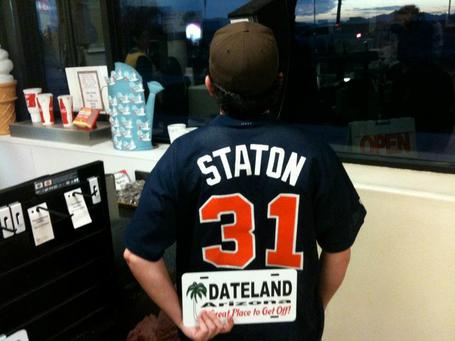 Dateland: A Great Place to Get Off!

We made one last stop at the Flying J gas station (10800 North Frontage Road, Yuma, AZ 85365) to purchase the remaining copies of the Yuma Sun featuring the Jersey. 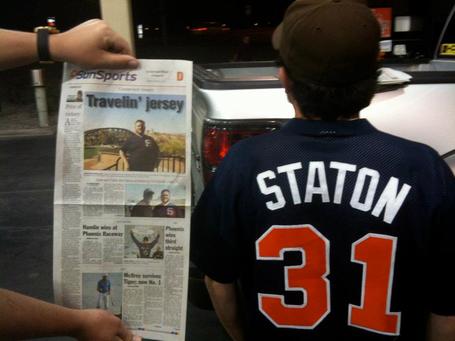 After returning home (Santee, CA), the jersey got some much needed relaxation for a few days. It caught up on some sleep. Got a nice massage. Got all the dateshake out of it's system. Until I finally got word that a new jersey wearer was chosen. It was Dex. We arranged to meetup at my 2nd home the Randy Jones All American Sports Grill (7510 Hazard Center Drive, Suite 215 San Diego, CA 92108) for the exchange. 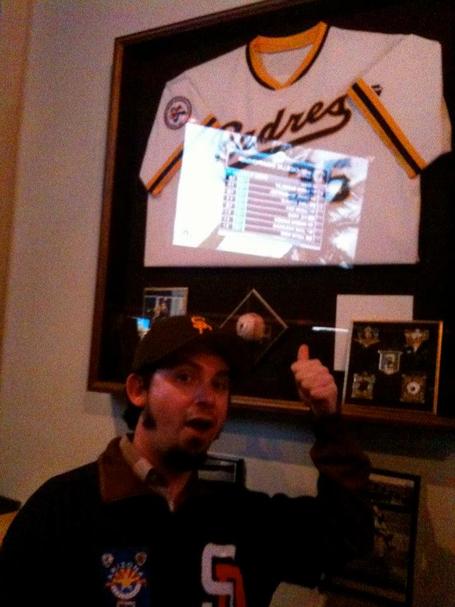 I dined on a Trip-Tip sandwich with beans & fries, rubbed a little RJ's BBQ sauce on the jersey somewhere for luck, attached a Bring Back the Brown patch on the sleeve and waited. 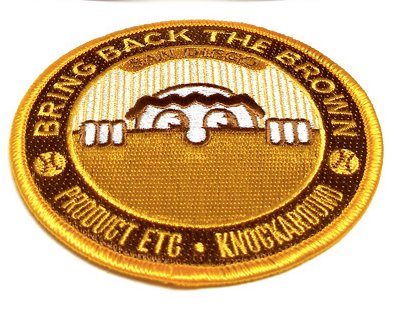 In walked jbox, Dex and Jonny Dub and they immediately lead me outside, executioner style. With the SB Nation camera rolling, light shining bright and microphone ready to go, I was told to hold hands with Dex. I wasn't sure where this was leading but agreed anyways. Then with one swoop the jersey was now on Dex and in his control. It was at that point that Randy Jones himself walked outside and saw us. We explained the jersey and I asked if he had a pen to sign the jersey. Of course he has a pen....he's Randy Jones! He signed right on the number, the GLB guys took off and my time was officially over with the jersey.

*NOTE - I didn't take pictures of the exchange because it was all being video taped. But, apparently the microphone wasn't working that night so there is no audio. I told them to do kung fu style voice overs.

With the exception of the Padres losing both games I attended while wearing the jersey, my entire time was a blast. Thanks to the Gaslamp Ball guys for letting me in on this awesome experiment and I look forward to seeing where it goes next.