Here's the blog post where I'll preview the changes that you'll see at Petco Park this season.

I've never had a problem getting 3G service at Petco Park, but just wait until the Pads have a 10 game lead in the NL West at the All Star Break. Then the park will be packed to its gills with Padres fans and you won't get any service at all. It could be super sh*tty like it is on the Wi-Fi at SDSU basketball games and the cellular service at USC football games.

Don't worry though, because the team is entering a partnership with Verizon and Petco Park is being fitted for free Wi-Fi. Plus the Padres probably won't have a 10 game lead at the break. It'll be closer to 15 games.

"Our fans have been asking for better cell service and for Wi-Fi," said Garfinkel. "This significant partnership is the first step in a larger technology initiative for the club that will provide more in-park benefits to fans."

Here's a picture from Saturday of all the scaffolding around the park that I guess is needed to install wireless. They'll probably have it all down by Opening Day but even if they don't I won't care that my view is obstructed because I'll be looking at my phone. 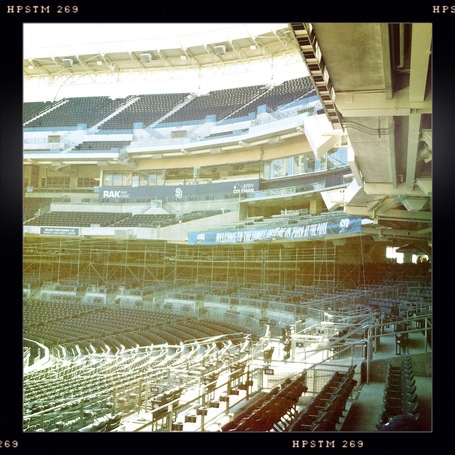 The Padres are re-purposing the flag court at the terrace level in right field. It will now be a viewing/socializing area.

The 7,000-square-foot, outdoor "Budweiser Patio" will overlook the field and include high tables, a bar, a viewing rail and a mixing area. The area will be open to all ticketed fans with no special ticket required.

The American flag will remain in its spot although the rest of the flags will be moved behind the patio to be more visible from the street.

Not much really changes for fans that are looking to watch the game from this area, except that now they can get drinks more readily and not bump into flag poles when they've had too many drinks. The only drawback that I can see is that it might attract more frat guys, but I never really go up there anyway so what do I care?

3. New Suite in the Padres Store

There used to be a sunken level of the Padres store that led you out behind the fence in left field. From the looks of it that area is being turned into a suite. You can't really view the game from this area unless you venture outside but there will be TV's and a seating area. I kind of get the feeling that when I go shopping for an $8 pin that I'll get jealous seeing a bunch of fat cats on display down there, but I'll just pretend they are for sale and feel sorry for them instead. I'll also beg them to throw me a hot dog, people in suites love that. 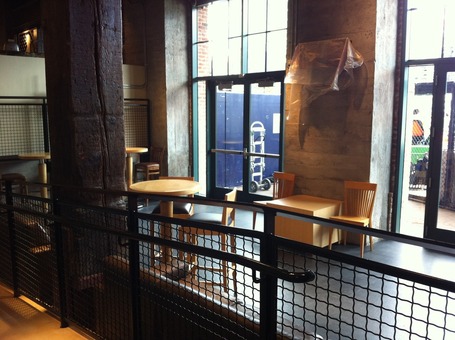 Ocean Beach's famous Hodad's will be serving up fine burgers at the ballpark this year.

@Hodadies
Hodad's Burgers Guess who is going to be providing burgers to Petco Park for home games this coming season?? WE ARE!! Also, Happy... http://t.co/HWvZvQ9Z
Feb 08 via Facebook Favorite Retweet Reply

Jon, Dex and I went to eat at the Downtown location a couple weeks ago to refresh our memory and our pallets. It's a good burger to be sure, but the double is enormous. It weighed about 4 pounds and was too big to fit in my mouth. In the first few bites all I got was a mouth full of onions and tomatoes. Still I'm looking forward to getting a quality single burger at the park.

5. The Sushi Restaurant is becoming a Mexican Cantina

Gaslamp Baller Will tells us that the Sushi Bar is being replaced with a Mexican Cantina. I had heard about this but for some reason was picturing it replacing the Margarita Bar behind the Mercado. I never knew the Sushi Bar was named Westwinds. Word is they'll be selling Bull tacos, beers, chips and guacamole.

@will61589
Will DeFelice @gaslampball Also heard they are turning the sushi restaurant into a Mexican Restaurant and Cantina. I was at the park being courted for season tickets and Spencer in the sales dept told me of the change. Just what i heard.
Mar 12 via web Favorite Retweet Reply

Tom Krasovic says on his blog that Fox Sports San Diego will be building a stage near the Tony Gwynn statue. I'm not sure if it's a permanent addition or will be there year round.

A broadcasting stage near Tony Gwynn's statue will be built beyond the center-field fence.