Fan Fest: Tour of the Clubhouse

Share All sharing options for: Fan Fest: Tour of the Clubhouse

We took the clubhouse tour once again at Padres Fan Fest. In the hallway they have the picture of Orlando Hudson spanking Jason Bartlett framed and signed on the wall. It's a weird moment to commemorate to say the least. Like I get that it's sexy but it's also fundamentally bad baseball. 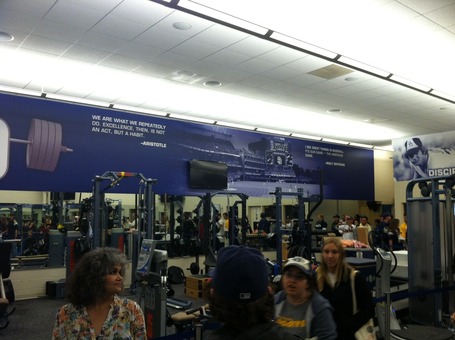 The weight room looks like it got a new paint job. Now there are inspirational quotes on top of the walls. If those don't do the trick they have a corner stocked with "supplements" and what looks like boxes of herbal teas. 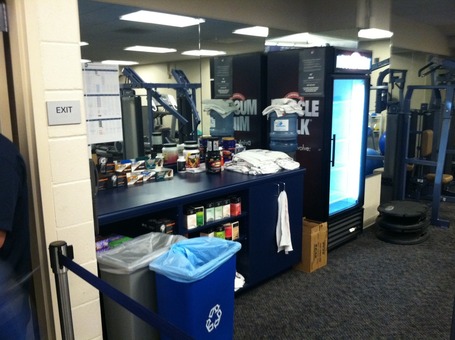 In the massage room they have a big bird cage in the corner. Usually when I want to relax and get a deep tissue massage I want to hear running water or an Enya album, not a squawking bird.

In high school I used to call over to Dex's house and ask him what he was doing and he'd say he wasn't doing anything. In the background I'd hear laughing and whistles. I always suspected that he was having a party that I didn't get invited to. That may have been true but years later I found out that he had parrots that made most of the laughing and whistling noises.

I asked one of the employees who was trying to keep the line moving what the deal was with the bird cage and he said it was for canaries. Dex asked, "So this clubhouse is like a coal mine where they have canaries to test for toxic gases?" I've seen what baseball players eat, I bet there are plenty of toxic gases in there once they start to get really relaxed during a massage. So I can understand the safety concern. 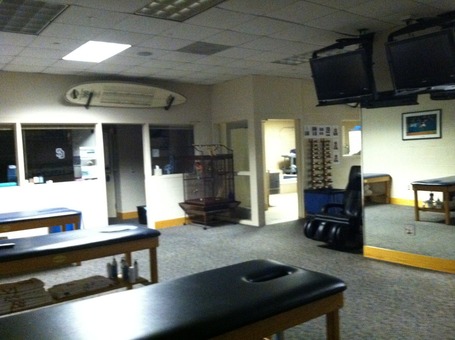