Share All sharing options for: My favorite part of Padres Fan Fest was waiting in line to throw (up) in the bullpen

Padres Fan Fest was alright, it's just that there were long lines for everything except the Groundskeeper tour. While Dex and Kev took their kids to the Bounce House behind the batter's eye, Jonny and I got in line to throw in the Padres bullpen.

In years past you could only throw in the visitor's bullpen, but this time you could toe the same rubber that Trevor Hoffman used for so many years. Plus you actually got to pitch to a mannequin batter and catcher which gave you something to aim for.

As we stood in line for about 40 minutes we watched as young softball players showed off their underhand fast pitch and Little Leaguers tried to bean the opposing mannequin batter. Each pitcher was given three balls to throw and for the most part it only took about a minute for them to pitch, gather their things and exit.

Then this older guy dressed in a Padres cap, jacket and mirrored sunglasses took the mound. He was probably in his mid-50's and no more than 5'2" . He removed his tiny backpack and was tossed the first of his three balls. He was a southpaw but held the baseball in his right hand under his chin while he brought his pitching hand to his mouth. He jerked suddenly as if to fake a throw to an imaginary third base men.

He came set again and spread his pitching hand's index and middle finger wide apart like you would to throw a split finger fastball. He then slowly brought the two fingers to his mouth and flicked his tongue between them like he incorrectly imagined a big leaguer would do. He finished the display by licking the tips of his fingers. I couldn't see his eyes through his mirrored glasses but it was like he was staring directly at me when he did it too. 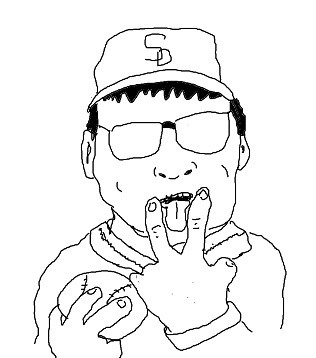 I recoiled in horror and exclaimed to Jon, "Oh that's just disgusting." Jon remarked how he didn't want to throw the balls that he was using.

After about 2 minutes of standing there on the mound performing oral between his fingers he finally threw the ball and it bounced no more than 4 feet in front of him and rolled about half way to the mannequins.

The process began again. He checked for any runners on third base who might want to steal home and then he got to third base with his pitching hand. Each time locking eyes with me as he did it.

I couldn't watch without grimacing and commenting something along the lines of "I think I'm going to be sick."

He was by himself and treating his experience on the mound very seriously, but each set up and throw were the same, the fake to third, the licking between his fingers and the throw into the ground.

Finally he threw the third ball and left. It was then that Jon told me that I should have videoed the whole thing. I was kicking myself, that video would have been gold. It was my only regret from Fan Fest