I'm really slacking on these posts. I haven't forgot; I've just been busy. But when I found time this morning to post, I jumped into it right away; no time for clearing the table off! 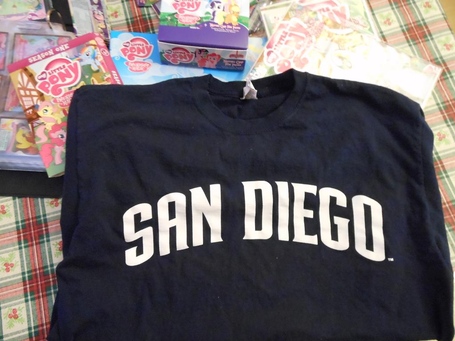 This week I bring you the opening day giveaway shirts from this year (4/5/12). This year opening day happened to fall on Easter weekend so I was able to drive down to San Diego and go to some games. Before this year, I hadn't been to an opening day game in like 8 years. Turned out to be a rotten weekend though as the Doggers won all 3 games I attended (Padres salvaged the fourth game on the Sunday but I was already driving home).

I like the simplicity of the shirt. Though I wish it said "Padres" as well as "San Diego". I don't think many people would pick up that the "San Diego" was written in a Padres font. People wouldn't know that I'm representing the city as well as team. The tag looks itchy. I've never worn it as it's a couple sizes too small for me. I keep on forgetting to gift it to my parents as they could likely fit into it. 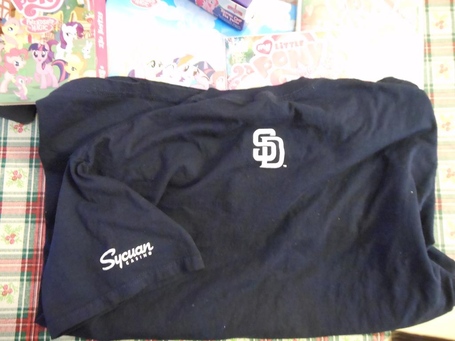 I like the interlocking SD on the back. A nice touch that wasn't needed but was done anyways. I also like that the sponsor logo is on the sleeve. Seems classy to me.