Share All sharing options for: The Eugene Emeralds' New Alternate Logo Might Be The Coolest Thing Ever

So, the Padres' short-season single-A affiliate, the Eugene Emeralds, revealed their new look for 2013 yesterday. I'm a bit of a uniform nerd so I was looking forward to it. I was not expecting what I saw: all Sasquatch, all the time.

The new cap logos I could take or leave. I mean, San Diego's own Brandiose did a great job with it but the whole Sasquatch deal is not really my thing. So far, unmoved. Then I clicked through to check out the wordmarks. Again, I was fairly unswayed- that is until I scrolled down and saw this bit of awesomeness: 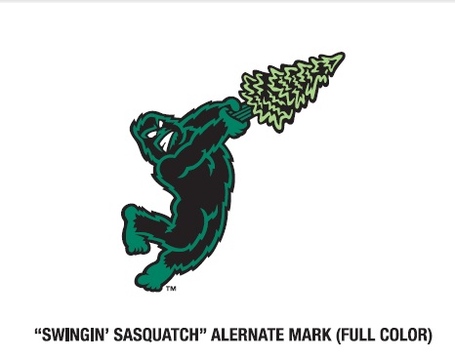 That made my day! And not just spotting their typo, either. I love that they put a stamp on the new look that connects it directly with the parent club. They need to do one of these for all of the affiliates. The TuPads already have their own Kino Bambino; they could bust out a Swingin' Johnny Appleseed for Ft. Wayne, a Swingin' Jim Bowie for San Antonio, and a Swingin', I don't know, Cloud or something for Lake Elsinore. Think about it, Mentor.