Sisterhood of the Traveling Jersey - Formula 1 in Austin, TX

The Sisterhood of the Traveling Jersey is a Gaslamp Ball community project that chronicles the 2012 Padres season through the lives of their greatest fans and an old jersey.

Share All sharing options for: Sisterhood of the Traveling Jersey - Formula 1 in Austin, TX 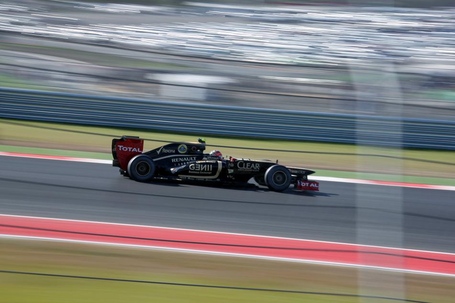 The Sisterhood of the Traveling Jersey has been gathering a bit of dust this off season. It’s been sitting in Jbox’s closet just waiting to unleash its powers. Last month the entire Gaslamp Ball brain trust got together for some MNF. We even brought the Jersey with us to the game to help stop Peyton Manning, and it goes without saying the Jersey decided to take the night off. 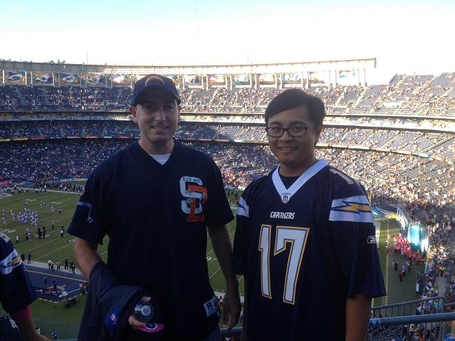 So that’s all I have to say about that. But last weekend the Jersey was back! And this time it was ready…

After seven years Formula 1 made its return to the United States. Kev, Dex and I are huge F1 fans so Kev and I jumped at the opportunity to see a race. Most Americans, especially those in Southern California don’t even know what Formula 1 is. F1 is the premier motorsport in the all the world. Teams will spend a half billion dollars per season just to field two cars for twenty races. Imagine the Yankees payroll doubled! 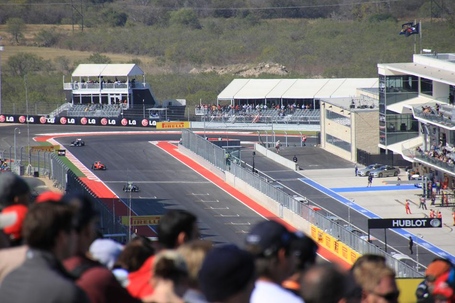 Kev and I arrived, Jersey in hand on Friday morning. We headed straight to the track for a practice session and to take in this new $400,000,000 facility. We were worried that being a new venue that there were going to be nothing but problems. We were wrong, everything went incredibly smooth. Getting in and out of the track was a breeze, everything was organized and all the volunteers were helpful and nice. Love that Texan hospitality!

The track itself is great. It has a lot of elevation changes so matter where you are sitting you can see several turns and action. We spent the first day watching practice from several vantage points. We must of walked ten miles, so at the end of the day we headed downtown for a drink.

Downtown Austin had closed off several blocks and set up an F1 Fan Fest. It reminded me of the NFL Experience that’s put on with the Super Bowl. Lots of interaction displays, racing simulators and such. And Austin being Austin, there were several stages set up with plenty of bands and music. We did a couple laps then settled in to the Fado Irish Pub for a couple beers. Will Buxton was there hosting Karaoke, not to mention Jean Michel was in the house!

After leaving the bar Kev had to take a major piss. We ducked into the Hilton for some relief to find someone special grabbing some water from a cart? None other than legendary F1 team owner Eddie Jordan. Jordan seemed to be under the weather, not to mention he’s been with a lot of women according to Kev. Other than getting this quick photo, I tried to keep my distance.

We headed back out onto the street when a familiar face walked right past us. At first we couldn’t place him, who is this guy? Of course, it’s Jenson Button’s dad! Without the pink shirt he looks quite different. Senior Button is quite the guy, real personable and funny. We chatted it up and he was very excited to sign the jersey. "Now you can sell it on ebay for a buck!"

The second day was more practice and qualifying. In between the five F1 sessions the track hosted other various forms of racing to keep you entertained. The Ferrari Challenge and Porsche Cup are basically a bunch of rich dudes driving around in the exact same cars to see who has the largest attachments. It’s interesting enough, but I was real excited to see all the vintage F1 cars they brought in for the weekend. 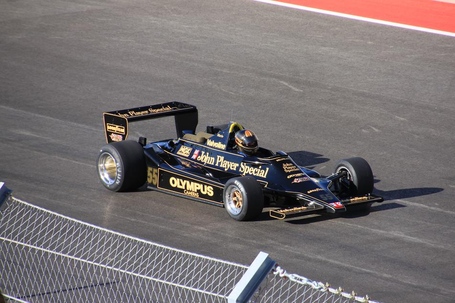 Classic race cars like Mario Andretti’s Lotus, Gille Villeneuve’s Ferrari and the six wheeled Tyrell car where all on hand. And Because the main grandstand is open to all after the final F1 event on each day Kev and I took this opportunity to watch a bit of racing from some real nice seats. 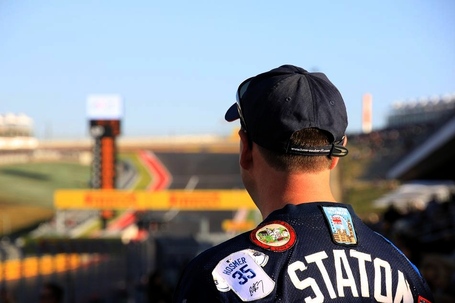 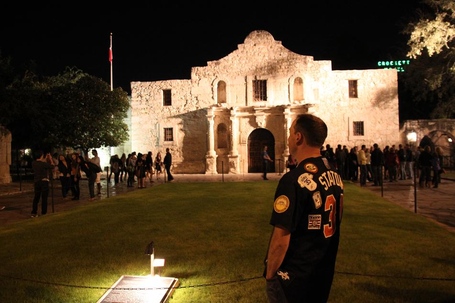 We were staying the nights in San Antonio, about an hour south of the track. So on our final night we decided to skip Austin and just take a leisure walk around town and get a drink. We headed over to the Alamo then down to the river walk. The river walk is this series of rivers that wind around downtown San Antonio below street level. It’s very touristy and reminded us of San Diego’s old town. So there we were, a couple of dudes sitting next to the river, sipping on some margaritas. Outside of seeing Jack Flack it was the perfect evening leading up to race day. 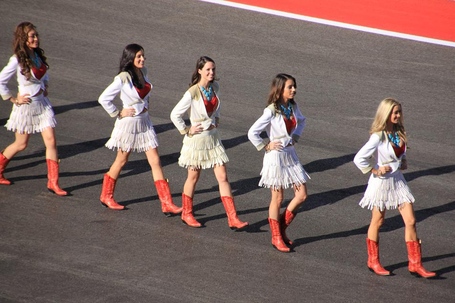 The day of the Grand Prix was pretty packed, everybody was psyched. We settled in on Turn 19 to watch the race. It was a good vantage point because you could see turn 1 in the distance and 3 other turns in front of us, including the final turn. The race was won by Hamilton, keeping the drivers’ championship still up for grabs heading into tomorrow’s final race. As expected Red Bull clinched the constructor’s championship. 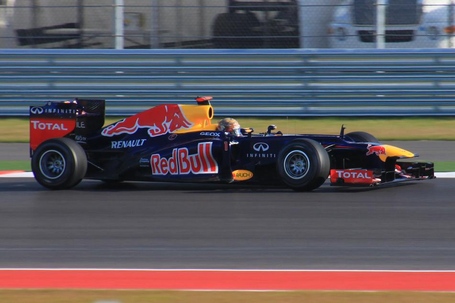 After the race we headed over to the main grandstand to try and catch a glimpse of the celebration. Several fans rushed the track before the police could get a handle on things and lock it down. We watched as Red Bull celebrated and were really itching to get down there. Along with the police guarding the front straight, was the obstacle of leaping down from the 10 foot railing, scampering across an access lane, crawling under the fence and jumping over the armco onto the track. We contemplated for several minutes… Finally somebody a couple hundred feet down to our right went for it. The police ran him down leaving us an open window.

We both jumped down and made it on the track in about 2 seconds. I didn’t even see what Kev was doing, it was everyman for himself. Once on the track we quickly blended in with the rest of the crowd and were safe from any Texas law men. We took it all in, talked with other fans, got DC’s autograph and took some pictures. 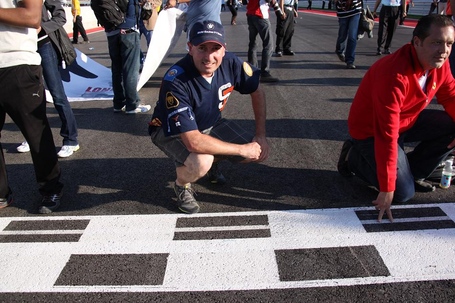 Worldwide F1 has the most passionate fans. These people are truly nuts for the sport and the teams they follow. I’ve been to a few World Series and the NBA Finals, and I can say the excitement and energy that builds up to and during an F1 race exceeds any other sporting event I can think of, except perhaps the Super Bowl. But I’ve never been to a Super Bowl, so who knows. This was my fourth F1 race, and probably the best all around experience I’ve had. Austin did a superior job hosting such an international spectacle. 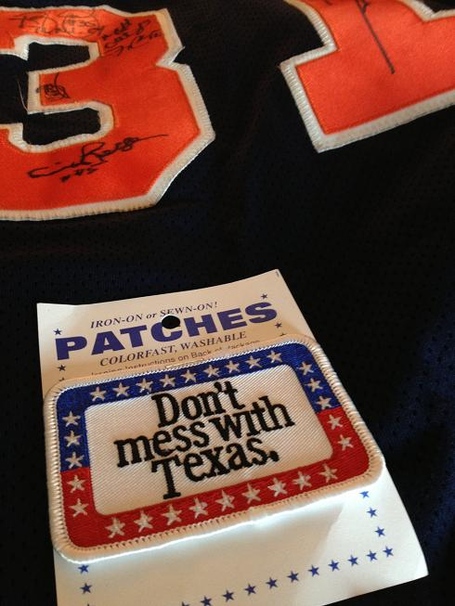 The Idea
The Beginning
The Sisterhood is Born
The First Steps
Spring Training Bound
With the Pad Squad
Welcome to Mexico
Braving the Beat Down
On to San Francisco
Going the Distance
London Calling
All the way to Belgium
Beer and Baseball in Colorado
Kansas City
The California Coast
West Virginia
Makes its way to Cincinnati
In Cincinnati and on TV
Pittsburgh and LA Adventure
Oregon where Padres begin
Cooperstown Bound!
Texas
Tennesee
VIDEO: Padres Organist with the Jersey
Playing The Organ For The Padres
F1 Race in Austin, TX