Share All sharing options for: Harry the Heckler returns to Padres game after altercation with Park security

If you've been following Harry the Heckler's FaceBook updates like I kinda have, you'll know that he returned to the ballpark after his run in with Park security earlier in the week. For me I was hoping he'd hold out a little longer. He only missed like a game or two. That's no boycott! I miss more games than that in one series. I didn't even get a chance to enjoy the peace and quiet. In any case it sounds like the healing process has begun between the Padres and their most obnoxiously loud fan. 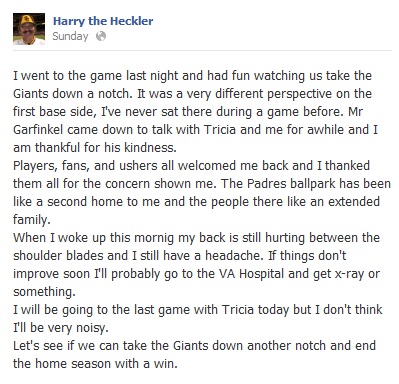 So there you have it, everybody is friends again. But if Harry is going to complain as much as he has about his injuries, then maybe he should just go to the hospital already. You're seriously going to wait a week to get that checked out?

We may never get the full story from either entity of what really happened, that's why I'm hoping that a Taiwanese Animation will come out telling the story the way only their animators can. That's how it deserves to be told. How good would that be? It's pretty much the only form of media that could make this story any more dramatic.

Harry will have to be careful now too, his theatrics may catch the attention of opposing players and they'll use this against him next time he's heckling them. "Somebody check this guy's fanny pack for contraband!" "Shouldn't you be in cuffs?" Those are terrible heckles but you get the point.

The lesson here, if there is one, is you don't get any special security privileges by being a Heckler. I get the feeling that this whole thing could have been avoided if he just complied and let them look through his fanny pack after he was apprehended instead of letting his defense mechanism of heckling take over.