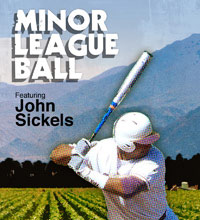 John Sickels doesn't often make lists, but when he does he puts the Padres second on said lists.

2) San Diego Padres: Incredible depth after the winter trades pushes this system almost to the top.

It's got to feel good as the Padres to get this kind of recognition from the great John Sickels. You work so hard to build up your farm system and no one seems to notice or care because the only thing that really matters to them is Major League Baseball.

Sickels is so graphic in the way he describes the Padres gutting the Cincinnati Reds. He makes it sound like a scene from Temple of Doom.

21) Cincinnati Reds: Heart of this system torn out by Mat Latos trade but there is enough at the lower levels that I think they can recharge quickly.

On a Fall night in the not so distant future we'll all look back on this day as a hazy, blurry memory because we'll have consumed so much champagne and it will be stinging our eyes in our post World Series celebration. Sure we lost to the Blue Jays in the World Series, but we'll remember that John Sickels was right. John Sickels is always right.