Dex and I spent most of the final day of the season together.  We went to see a matinee of Moneyball and then stuck around downtown to watch game 162.  After 6 hours together we split up.  He went with his kids to the Beacher seats and I took some quiet time to reminisce about the season from section 115.

In a way it felt like the last day of school.  You were saying goodbye to friends and players, some of which you may never see again.  All the while knowing that when you come back next season things would be different. 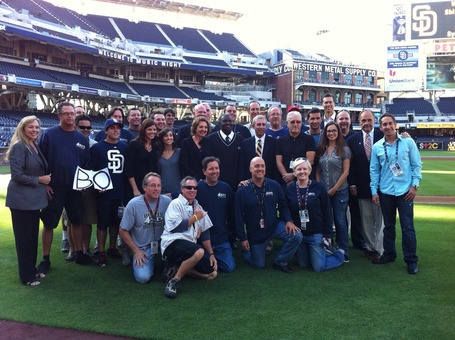 I kept thinking that I should have recorded the last Channel 4 Broadcast.  I was sure that I was missing some emotional moments.  We were fortunate to meet and become friends with quite a few of the good people at Channel 4.  Even when we were fledgling blog they always were generous with their time and kind to us.  I'll sincerely miss them and hope they either find their way into future Padres broadcasts or at least stay employed in San Diego so that we might meet again.

I didn't get a chance to talk to any Gaslamp Ballers that night but we wanted to thank you all for visiting, reading and interacting.   It's nice to know that you can always find someone interested in the Padres year round, no matter the team's record.  We'd like to say a special thanks to jodes0405 for managing the Game Threads for most of the season.  She really took a lot of pressure off us.  It's a grind getting those up everyday, but from everything I hear Jodes loves the grind.

Even though the Padres won 9-2, I was little melancholy knowing that the season was over.   I moped my way down the stairs towards the exit. It was then that I looked to my left and saw Padres President and COO Tom Garfinkel standing with a group of security.  I went over to say a final farewell.  He asked if I wanted to go on the field.

Apparently he had invited his Twitter followers to meet him after the game for a "something big".  I didn't realize it at the time but most of his followers missed the message since it began with an @ reply.    I was just fortunate to be in the right place at the right time.

@TomGarfinkel
Tom Garfinkel @Aztecpaulg @tomgarfinkel good idea. Anyone who meets me at the bottom of waterfall top of 9th gets something big
Sep 29 via Twitter for iPhoneFavoriteRetweetReply

Once in the bowels of Petco Park, Mentor looked over at Aztecpaulg and myself and dismissed security.  Apparently he thought things wouldn't get out of hand, but if they did that he could take us.  Or maybe he felt safer knowing that I was there, his protege at his back, and that in a pinch I can fight, claw and bite like a badger.

Onto the field we went.  The players were taking part in a long time Padres promotion.  They sell raffle tickets for charity and the winners get the "Shirts off their backs" after the final game.  So the players stripped down to their undershirts and signed their jerseys for the winners.  For some reason the moment that really sticks with me is seeing Chris Denorfia from the back side.  He cut out panels in the back of his undershirt, so that his bare back showed.  It was risque.

The Pad Squad and players threw foam balls to the remaining crowd.  Loxie handed me a ball.  I have always wanted to see if I could throw a squishy ball into the second deck.  I let loose and bounced it off the second deck facade, then it fell and hit a fan in the head.  I'd be a terrible Pad Squadder.

The outcome of season was disappointing by all accounts but going to games was always fun.  I'll miss going downtown a few times a week to catch a game, though I admit It'll be nice to recharge during the off-season and get excited again next Spring.