The San Diego Padres and the REAL Moneyball Players

Share All sharing options for: The San Diego Padres and the REAL Moneyball Players

Moneyball, the movie, is coming out soon. Though it reads like science fiction, and contrary to popular belief, the movie and the book were both based on events that actually happened.

Anybody who says that Moneyball is about the players on the field, a particular type of approach to at-bats, or winning a championship did not understand the book the way I understood the book. I mean, the main characters of the book, the ones who actually made decisions and treated the baseball players as the chess pieces that they are, are the front office executives.

So who really cares about Jeremy Bonderman? Answer: Nobody. Miguel Tejada? YAWN.

I mean, really, what's the point of arguing if Jeremy Bonderman's career justified Grady Fuson or Billy Beane? No point other than to try to determine if Billy Beane and Grady Fuson are actually effective at their jobs.

I will not be doing that evaluation.

Instead, I'll point out the Moneyball Players who have come in contact with the San Diego Padres and maybe offer up a little bit of context as to how I personally feel about each of them. This will be useful to you, San Diego baseball Fan who also enjoys a good popcorn flick every now and then. You will have some context and be able to say things to your date like, "That guy right there used to work for the Padres" and "I know a guy from the internet who knows a different guy from the internet who actually hangs out with the dude who that fat dude is supposed to be."

WARNING: IF YOU HAVE NOT READ MONEYBALL OR SEEN THE MOVIE, CONSIDER EVERYTHING AFTER THE JUMP TO BE SPOILERS.

Paul DePodesta (Not Peter Brand)
From what I've seen of trailers, the Moneyball movie will have you believe that Billy Beane trusted his draft strategy to an uncharismatic computer geek who had never seen baseball in his life and appears to have trouble speaking in front of people bigger than him. In actuality, Beane's right hand man was Paul DePodesta, who served with the Padres as a Special Assistant of Baseball Operations and also as an Executive Vice President. Interestingly enough, Paul DePodesta is also super charismatic, and a terrific communicator as evidenced by his blogging ability, the now legendary DePodesta vs Gaslamp Ball interview series, and the pile of love letters and fan mail he received while in office. 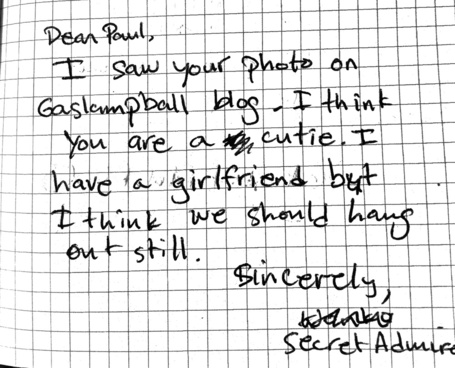 By the time the events of the movie happen, DePodesta would have already spent three years as an advance scout for the Cleveland Indians. In that capacity, the more amazing story would've been if he somehow managed to not see a baseball or be forced to communicate with men bigger than him. Paul has since gone on to the New York Mets to work as Assistant to the General Manager, who happens to be none other than Sandy Alderson, another form Padres front office employee.

If you read through the interview series, you'll notice that Paul DePodesta actually will say things like, "That's when you rely on your scouts." The book may have you believe that DePodesta didn't even believe that a scout should be trusted, but in actuality, DePodesta's philosophy hinged more on the idea that what's seen with the eyes must be verified with the statistics and what's seen with the statistics must be verified with qualified eyes. This however does not make for drama. In drama, people are not so open minded.

Grady Fuson
Best known in San Diego for instituting a draft pipeline, which I was never able to fully comprehend, right up to the day he was let go. Grady is now back with Billy Beane in Oakland, which is like Episode III or something. Grady Fuson's like a young Anakin Skywalker, well versed in the secret magic that lets him be a front office executive. BIlly Beane is obviously Palpatine, using untrustworthy technology and sun-wrinkled hands. And now the two have come together once again.

Fans of the book will know Grady Fuson as the "bad guy" or, to borrow from the French, the "antagonist". The book would have you believe that Grady was a caveman who was more apt to spot titties on a fat dude than understand the intricate differences between Excel 2010 and a Kindle, but this was not the case.

Rather, Grady's skills as a front office executive were partly honed during his time spent under Sandy Alderson with the Oakland Athletics. Grady was a member of the front office team that helped Oakland achieve World Series prominence.

I never got to interview Grady Fuson because I was scared of him and figured he would probably yell at me.

In part two, we continue to cover how the San Diego Padres and Moneyball are linked like Kennedy and Lincoln! Like did you know that in San Diego, we put "Beanes" in burritos, but Bay Area residents eat their burritos with "Hoyers"!?  BELIEVE IT OR NOT.

But no joke, Billy Beane grew up here and has attended UCSD, which is where I went to school. THE DUDE IS A CLOSET PADRES FAN. More on that in the next blog post.