Padres shutout in defeat to the Dodgers

Share All sharing options for: Padres shutout in defeat to the Dodgers 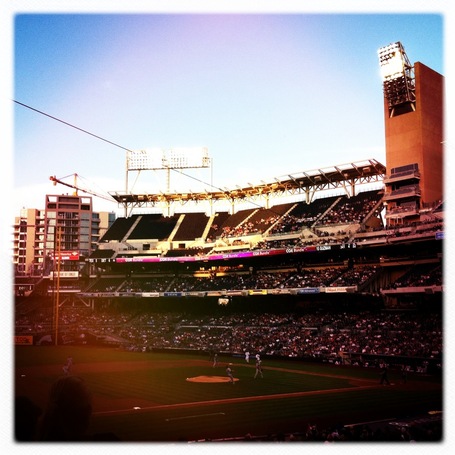 Last night was my first chance to see the new look Padres after the trade the sent Mike Adams to Texas and Ryan Ludwick to Pittsburgh.  I didn't notice much of a difference.  The pitching still did its job and the offense was shut out again.  It's a pretty standard story for the Padres in the Petco Era.

It's games like last night that make it hard for me to believe that pitchers want to play for the Padres for more than a season.  Hitters obviously get frustrated, but the strain must be equal or worse for pitchers who know they will get very limited run support from a deadbeat Padres offense.  You really think Mat Latos enjoys pitching for San Diego right now?  Not me.

As a fan you try to get excited about seeing the young talent coming up through the pipeline, but so far Anthony Rizzo and Kyle Blanks have been awful at the Major League level.  It's hard to get too hopeful for the future when our best from the farm system are dead on arrival.

It seems like the lesser known players like Jesus Guzman, Blake Tekotte and Aaron Cunningham have upside for the current incarnation of the Padres.  Maybe it's because we expect less from them.

Jon and I spent the first 4 innings in our seats and then developed a case of wanderlust.  I keep getting the urge to try some new types of food at Petco Park in order to enhance my fan experience.  We asked Twitter to decide our dinner menu for the night.

It seemed that our followers fell into a few distinct camps when it came to eating at Petco Park.

1.  First there were two of you who wanted me to eat my cheapskate creation the Jalapeno Handshake.  I passed because I had 40 dollars in my wallet and was feeling decadent.

2.  There were another two of you who insisted that we eat the Randy Jones Hot Dog.  When the park first opened I was all the way in when it came to that RJ hot dog.  Now it's too much for me.  Maybe as I get older my appetite shrinks or I've just grown tired of having that much meat in my mouth.  Actually hot dogs that are more than an inch in diameter gross me out.

3.  Surprisingly there were three of you who were very passionate about the Kosher Hot Dog.  I'm not sure where you actually purchase these Kosher Dogs but I need to investigate them further and possibly measure their girth.

4.  Gaslamp Baller matthewverygood warned us not to exit the ballpark and go to Subway like we do on occasion.  I try to remember Matt the way he was when we first met him.  He was full of life, devilishly handsome and friendly to a fault.  Of course after lovingly teasing him for the better part of three years, like we would our kid sister, that's all changed. I'm pretty sure that dude seriously hates us now so I ignored his suggestion too.

We ended up just getting Fillippi's pizza slices.

Jon and I decided to take a lap of the park to walk off our meal.  Jon played a new game called "Spin Win" or something.  It's a console of video screens that promises a prize to every participant.  The only catch is that they ask you for a ton of personal information.

With each question it became more and more ridiculous, but the girl working there said they wouldn't sell your information which I didn't believe for a second.  They want your full name, telephone number, email address, household income and a count of your sexual partners.   Finally the questioning was over and Jon won a round of golf up in Escondido.

Next we traveled to the Military area behind the right field stands.  Do you remember when I suggested the Padres incorporate Naval Signal Flags into the ballpark back in May?  Guess what I saw hanging from the rafters? 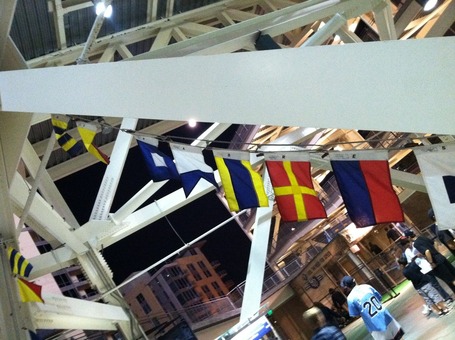 Correct me if I'm wrong, but I don't think that those flags were always hanging there.  At least I don't remember seeing them before.  I think they may have implemented my idea.  They even spelled out "Go Padres" as I suggested, though that's a pretty obvious message for the ballpark.

We took a moment to watch the game in the standing area in right field and found that we were standing behind an off duty Pad Squad Andre.  I told Jon to follow my lead and started bloviating loudly about the Padres to see if he'd recognize our voices.  He did.

Meanwhile Mat Latos was still throwing and from our new vantage point we could see that his pitches still had lots of movement.  Nothing he threw was straight, like Luebke's teeth.

After sufficiently giving Andre a hard time about his recessive albino genes we retreated back to our seats.

It was on our way back that we happened upon Pad Squadders Alicia and Elizabeth.  Alicia seems to really enjoy being a Pad Squadder.  I'm not sure I've ever witnessed any Pad Squadder having as much fun as her.  As for Elizabeth she was really focused on the game.  I had mentally checked out a few innings prior and she was still following every pitch.  She'd be a perfect fit for ABC News, if only someone had a connection.

The night ended with Padres hitters failing to score and yet another loss, but we had a delightful night at the ball yard.