I didn't watch the Padres game live.  I was about three innings behind the rest of you.  I was trying really hard to stay off line so I wouldn't see the future score and possibly screw up the space-time continuum.  Then around the 6th inning I figured "What the hell?"

As soon as I saw the Padres had lost I in turn lost interest in the rest of the game and tuned out.  I missed this little nugget in the 9th inning, but thankfully Pad Squad Jacquelyn sent me the link.

Logan Forsythe hit a pop fly down the right field line.  Justin Upton charged over to the edge of the wall and camped beneath the ball.  Suddenly a spectator's arm reached out of the stands above Upton's glove, stole the ball and smacked Upton across the face for good measure. 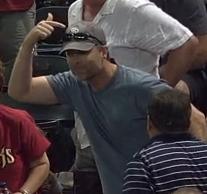 A confused Upton shrugged his shoulders and apparently asked the fan why he'd interfere with the play? The fan spins around in dramatic fashion and points to the interlocking "SD" on his cap.  He's a Padres fan!

I'm not sure if I've ever seen so much passion and civic pride out of a Padres fan.  If I was in attendance I'd probably have already accepted the sweep, been in some sort of food coma and checking Twitter.  I'd be completely unaware that a ball was even hit in my direction.    This guy is fired up and looking to brawl.  Nothing is more telling than the look of embarrassment on his wife's face.

It appears that broadcaster Mark Grant had it right.  The fan did technically interfere with a ball in play, but the game was practically over and he too probably figured "What the hell?"

I usually don't condone fan interference, but I'll make an exception in this case.

However, should a spectator reach out on the playing field side of such fence, railing or rope, and plainly prevent the fielder from catching the ball, then the batsman should be called out for the spectator's interference.