I'm watching the Trevor Hoffman number retirement ceremony again.  I tried to record it on Channel 4, but it ran over the half hour allotment.  Instead of the planned 30 minutes, it ran an eerie 51 minutes.  Fortunately the entire ceremony is available online at Padres.com.

Trevor Hoffman is one of the most beloved Padres of all time, probably second only to Tony Gwynn in terms of fan affection and greatness.  After Sandy Alderson completely obliterated the Padres' relationship with Hoffman things never quite felt the same as a fan.

It was like your parents were involved in a messy divorce and you chose or were forced to live with one parent (the Padres) but always wished that Hoffman would return home and you could once again be a family.  Hoffman may have returned as a Padres employee this past winter, but yesterday was the day that the two parties remarried and made a commitment that they would never be apart again.  I take some comfort in that.

The ceremony was outstanding and I tip my cap to the entire Padres organization.  They went above and beyond my expectations.  I cheered, I laughed, I learned and my eyes even teared up on two occasions,

Hearing Trevor's two older brother's reminisce while looking at old family pictures was both funny and heart warming.  Seeing rare video of Hoffman making spectacular diving plays at short stop for the University of Arizona and wearing a flat top hair cut that was easily 30 years out of style at the time, was great.

Then came the introductions of the  honored guests in a "This is your Life" segment.  Past coaches, teachers, friends and players walked a red carpet up to the mound to embrace Hoffman.  The loudest cheers were for Steve Finley, but when Chris Gwynn came out representing the 1996 club Jon and I gave him applause by doing his famous sideways crocodile clap.

When I talked about the Padres going above and beyond, I can point to Brian Johnson from AC/DC.  They arranged for him to send a taped message to Trevor where he said "When we played that song [Hell's Bell'] at concerts we used to rock the crowd, but you rocked the mound, mate."

Next up was a taped message from Baseball Commissioner Bud Selig.  He was booed by fans but he made a statement about Trevor's eventual Hall of Fame induction. "I look forward to the day, less than 5 years from now, when you will join them [Gwynn and Winfield] in the Hall of Fame as one of the great relief pitchers that this game has ever seen."

One of my favorite parts of the ceremony was watching all the other Padres with their numbers retired walking out of centerfield to greet Hoffman.  It was great to see Garvey and Winfield wearing their Padres jerseys again and accepting their connection with the organization if only for a brief moment. 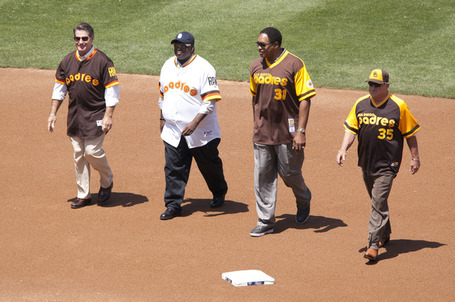 The Padres current leadership then gave Trevor a black 1958 Cadillac Convertible with an "SD 51" plate to the sounds of AC/DC's "Back in Black".  Trevor packed his kids in the back seat and called for his wife to join him in the front seat "C'mon baby!"

That's when we received a tweet from "a fan" who thought the money could have been better spent on a contract extension for Heath Bell.  Ugh.  We figured out that the cost of the car might pay for 2 days of Heath's current salary.  Who are these people that can't find any enjoyment even at a moment like this? 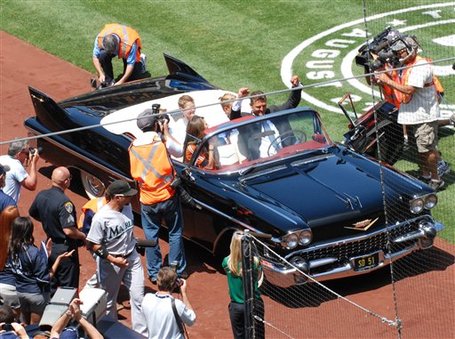 Trevor started his speech in the same way that Gwynn gave his retirement speech.  "Thank you.  Thank you.  Thank you."  Then told the crowd to take a seat so that we could have a talk.  He talked about how grateful he was. About his family being his foundation. About the game of baseball being sacred.  Then he thanked the fans who would give him "an adrenaline kick" every night.  He wanted us to remember each time we looked upon his number that he cared about being a teammate and that the path to true success has no shortcuts.

The final part of the ceremony was without a doubt the best and most emotional.  Trevor Hoffman lost his father in 1995 before he had achieved so much professional success.  His father was a United States Marine who had stormed the beaches of Iwo Jima as well as an usher for the Anaheim Angels.  He was known as the "Singing Usher" and sang the National Anthem regularly with great patriotism.

When Trevor saw the Marine Corps color guard march onto the field he was wondering what had been planned.  That's when the Padres played rare footage from 1981 of Ed Hoffman singing the National Anthem at Fenway Park.  Trevor had originally missed the moment when it happened because he was in the hospital having an appendectomy.

"We knew what effect if would have on the Hoffmans and the crowd," said Padres Director of Entertainment and Production Erik Meyer. "We thought a tribute to Ed was a good way to end."

When Ed Hoffman hit the high notes of the Star Spangled Banner, it definitely had the desired effect.

A great finale to a great ceremony.