Hoffman's Retired Number: What are they planning!?

Share All sharing options for: Hoffman's Retired Number: What are they planning!?

So we're getting close to the unveiling of Trevor Hoffman's retired number. If you're anything like us, then you're awaiting this moment the same way that Apple fanatics are awaiting news of the iPhone 6. iPhone 5? Behind the times. Those dudes want to know about the 6.

Unfortunately, nobody at the Padres has spilled any sort of secrets to us. We've begged and pleaded and called in favors and all it's gotten us is a cold shoulder. Therefore we speculate... 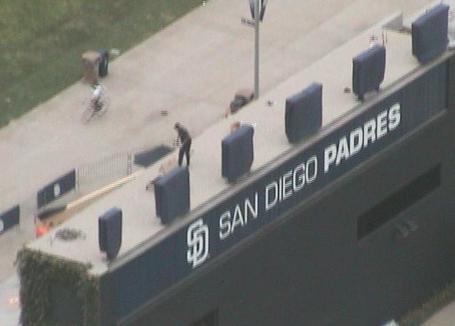 All we've been trying to figure out is what order the numbers will be in, but clever Mentor (or Laura Broderick maybe) style, all the information is kept secret. They think we're blabbermouths and we are. We are.

So what can we deduce from this. You be the Hardy Boys and I'll be Nancy Drew, Girl Detective...

They are retiring the number 51
Probability: 99.99%
Evidence

There are now SIX retired numbers.
Probability: 98%
Evidence: You can tell that by counting the number of covers up on the batter's eye where they display the Padres retired numbers. There is only one way they could stay with five retired numbers and have 6 things up there and that's if they were retiring RAK, buuuuuut....

They are NOT unretiring Steve Garvey's Common Law Retired #6
Probability: 98%
Evidence: Assuming they stick to mostly numeric order, the left most number is also the narrowest number, indicating that the number 6 is still going to be retired. Even though California does not recognize Common Law Marriage, the Padres continue to recognize Common Law Retired Numbers and the accidental retiring of Steve Garvey's number continues. One of these days, I'm going to spray paint the number 00 (my own number for adult league baseball) on a seat somewhere in foul territory (where most of my adult league hits ended up) and see if the Padres retire my number too. Apparently, that's all it takes to get a number retired. Granted there's no story like Steve Garvey's story attached to my number, but that's just because I haven't told it yet.

They are going to run the values in non-numeric order
Probability: 10% 72%
Evidence: Photographic! As recently as two days ago, jbox speculated to me that they would group the Padres numbers together and leave 42 at the end to give it the special significance it deserves. From what we can tell, given the angles and measurements and mathematics, the 6th number is actually wider than the 5th number. Which would make sense given that 42 in a typical non-fixed font is wider than the number 51. That actually increases the possibility of:

They are going to have different fonts for the number 42
Probability: 75%
Evidence: If the Padres do decide to run with the number 42 at the end of the list, it won't make much sense to the very very casual baseball fan. Easiest thing to do? Use a different style font, even if it's just a different color. The Red Sox do this. The Yankees even go so far as to do what we're guessing the Padres are going to do and pull the number out of order.  The Twins and Mets do this as well.

They are going to order the numbers according to when the Padres retired the number
Probability: 42%
Evidence: We don't have a lot of evidence for this one other than the fact that the Yankees do it (except for Jackie Robinson) and for the fact that the second to last number might be the next narrowest number after the number 6 and it appears to curve at the bottom, indicating it could be the number 19. Also, teams are super gay for the Yankees. It's like, "Oh hey... If we do what the Yankees do, we can win also." But my argument against that is the Red Sox. Along with winning comes the curse of turning your entire fan base into a bunch of little pricks.

They are going to have completely different fonts for ALL of the numbers
Probability: 33%
Evidence: What do the Padres like to do more than ensure that at least 30% of their seats are empty for any given game and that television is not available for at least 12% of the possible viewing audience? Change their uniform scheme! What better way to reflect that (and to make updates to the numbers t-shirts next to impossible) than to use the prevalent font and color scheme for each retired number? Gwynn's could be in a blue and orange. Winfield's in the brown and yellow. Trevor could get a sand and sky. Etc

The Number 51 will have the exploding scoreboard fireball effects built in
Probability: 8%

The Number 19 will shoot Little Debbie's Snack Cakes into the Park in the Park whenever a batter hits a seeing eye single between the opposition's short stop and third baseman.
Probability: 3%

All of the numbers will be set on robotic joints to raise and lower them at any given time, thus enabling the display to do The Wave as part of a home run celebration.
Probability: 17%

All of the numbers will morph into various letters to spell out the name of a sponsor or to indicate when a young fella wishes to propose to his gal in the stands.
Probability: 4%