Another great showing by our offense, led by Will Venable, gave us the win yesterday. Our bullpen was unable to shut out the Mets and gave up two runs in the eighth and ninth innings, but it wasn't enough to overcome our Padres' nine runs. One of the highlights of the game was James Darnell's single in the ninth, his first major league hit, which later turned into a run. Then in that same inning, with Logan Forsythe batting, Aaron Cunningham stole second, and while Mets' catcher Josh Thome unsuccessfully tried to throw him out at second, Jesus Guzman stole home. The game ended 9-5 in favor of the good guys.

Today we will go for the series split in game 4 against the Mets. Cory Luebke will try to repeat his last performance, a gem in which he gave up just one run on five hits in seven innings. He seemed to be more confident pitching with a big lead (we scored 13 runs in that last start), so hopefully our Padres can continue that trend today against Jon Niese, who wasn't as lucky in his last start. Despite winning the game and pitching shutout baseball in his last five innings of work, he gave up five runs in one inning against the Braves. That seems like just the type of outing our Padres can take advantage of.

We have been relatively successful in these last two series, putting some hits together and getting our baserunners home. If we can keep that going today, there is no doubt in my mind that we can win this one and salvage the series split before moving on to Cincinatti.

No TV broadcast today, but you can watch the game for free via MLB.TV riiiight HERE. 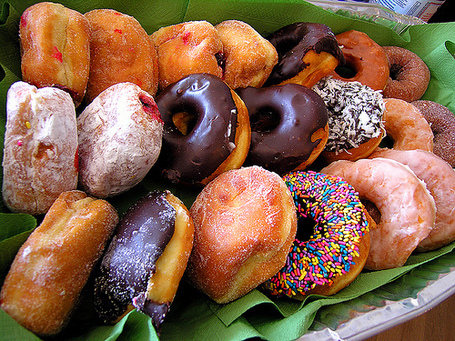 And here are some donuts for all you lovelies who read the intro.