Padres do what they do, beat Giants

Share All sharing options for: Padres do what they do, beat Giants

Well the Padres have beaten the Giants again in spectacular fashion.  I imagine that it's got to be really annoying to be a Giants fan when the Padres come to town.

"I really don't know what it is here," said third baseman Chase Headley. "We're familiar with them, we match well with them and we play with a lot of confidence here."

I'll tell you what's annoying for a Padres fan.  When Tim Flannery thinks he's still playing, leaves the third base coach's box, runs 80 feet down the the third base line onto the dirt with arms spread like he's an airplane and the umpire does nothing.

I propose they put a stake into the ground and shackle base coaches by their ankles to a 3 foot chain.  Better yet, get rid of base coaches all together. 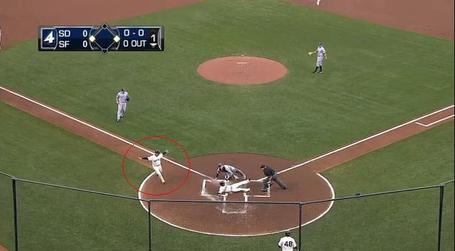 Of course this play at the plate never would have happened if Orlando Hudson didn't juggle the ball in right field.

Fortunately the defensive mistakes were negated by some timely hitting in the 6th inning.

My favorite play of the game was when Chad Qualls bounced a pitch with Andres Torres on third base.   As Nick Hundley chased after the ball, Qualls slid into home before Torres, blocking the plate.  After tagging out Torres he celebrated by spiking the ball in his face.  It's kind of a punk thing to do, but I'm okay with it since he's a Padre.

"I kind of lost my mind out there," Qualls said. "It was adrenaline. This is a big series for us."