Went to the Padres game tonight.  I was sitting up in 303.  Good times up there until Giants fans rolled in to sit next to me. 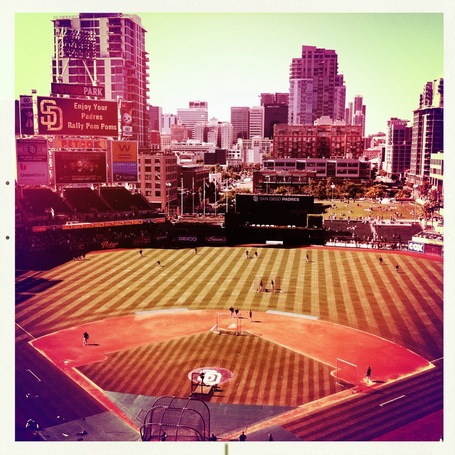 The Giants fan immediately next to me filled up his seat and some of mine.  He was drunk.  So drunk that he kept losing his balance and leaning into me.  I thought for sure he was going to take a plunge over the seats in front of us.  It wasn't long before he started chewing tobacco and spitting into an empty can.  As if he wasn't a big enough distraction he kept reaching his arm in front of my face to high five Giants fans in the aisle. 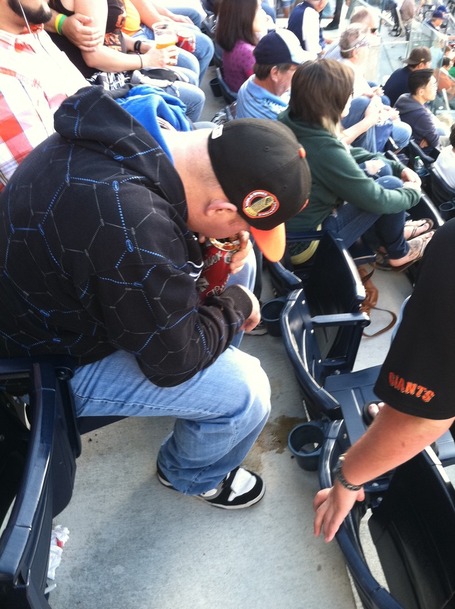 fter about an inning he leaned over and started spitting his tobacco into his can, but doesn't come up.  He was bent over for a while and then started convulsing.  I look over at his friends, like "Hey dudes, you may want to check on your buddy here."

I leaned over to take a peek at him and there was a bunch of vomit on top of the can and running down his hands.  He pretty much passed out and became non-responsive.

His friend tried to get him out of the seat.  It took about 5 minutes of prodding before he finally was led away.

I took a picture just to document the experience.  If you want, you can zoom in and see the mango salsa that he had prior to the game at Rock n' Baja Lobster on the lip of the can.  It didn't smell half bad.

About the same time Jesus Guzman jacked a three run homer off Barry Zito who was hammered by the Padres.

.After a few more innings and another three run home run by Orlando Hudson, Giants fan returned a little more sober than before.  He sincerely apologized over and over.  I gave him a few forgiving pats on the back and told him it was cool, but in truth I preferred sitting next to the little pool of vomit than he and his buddies.  Fortunately they left after the Padres continued to pour on the runs.

Later in the game Mentor tweeted that he was giving away tickets.  I rushed to his location and he upgraded my seat right then and there.  I went from sitting next to vomit to sitting in luxury.  If you're not following Padres President and COO @TomGarfinkel on twitter than you should be, he's giving away sweet tickets to Padres fans like a mad man.

Tweeting him is also a way for fans to be heard.  He's listening.  A few of us have been complaining about ushers asking Padres fans to sit down during exciting 9th inning moments.  That's been taken care of.

@timsd @tomgarfinkel stand up policy has been addressed with all of the ushers. Thanksless than a minute ago via Twitter for iPhone

Great game by the Padres.  Loved seeing the offense explode for 11 runs. Let's do it again tomorrow.  Go Padres! 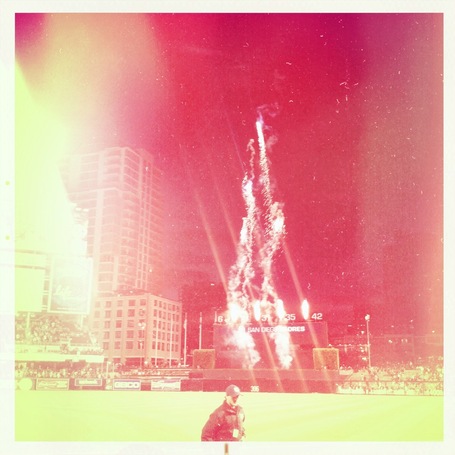