Bell blows save. Padres lose. We watch game and wander around ballpark.

Share All sharing options for: Bell blows save. Padres lose. We watch game and wander around ballpark.

It was good to be back at the ballpark, no matter the end result of the game.  Jon and I were surprised at the size of the crowd.  Admittedly most of them were tourists from the Bay Area.  We thought for sure that we'd be the only ones there.  Our seats were in the corner next to the left field foul pole.  Apparently the entire third base line is Giants territory.

Most Giants fans in attendance were obnoxious.  I guess I'm kind of low key in general but when I go to a visitor's ballpark I try not to make a spectacle.  I'm there for the game not to draw attention to myself.  I don't wave my cap in front of home teams fans or point to the phallic a symbol on the back of my hat to taunt locals.

I don't mind that they wear their team clothing or cheer, but the flamboyant waving of flags and thrusting of hips is a bit over the top.  I get it. You saw the Giants win last year and you want to be part of the victory parade. You bought your "Fear the Beard" t-shirt and your Tim Lincecum jersey and you want everybody to know that you like a winner.  I'm sure Major League Baseball is happy to have new fans.

The game itself was typical Padres.  Aaron Harang shut out the Giants for 7 innings.  Mike Adams shut them down for another inning and the Padres only scored one run. All typical.  Then something strange happened.  Heath Bell gave up a solo home run to Aubrey Huff.  That sent the game into extra innings.  More typical Padres baseball.

As the Giants loaded the bases a lone Padres fan stood up to support the team.  An usher started to wave his arms trying to get him to sit down.  The Padres fan ignored him.  That led to the usher calling security.  They asked for the fan's ticket and he didn't have one.  The Padres fan was removed.  At this point in the game, no one in our section actually had tickets in that section except us.  Giants fans had poured into the lower level seats as soon as the game went into extra innings.

Moments later after the Giants started scoring their fans started to stand.  Not one usher asked them to sit.  Soon Giants fans were standing and all Padres fans were sitting. They had been conditioned by the ushers. 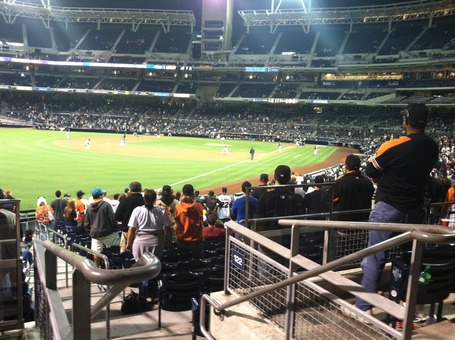 Yeah so once it became obvious that the Padres would have to score runs to win, the game was over.

Oh by the way, when Jon and I were walking around the concourse earlier to get food we bumped into TV Personality Jenny Cavnar.  I looked up and she was there.  I reacted quickly and held my hand up to give her a high five.  Instead of slapping my hand, she clasped it and we held hands for a few milliseconds, but it felt like an eternity.  It was very subtle, but I think she also massaged the back of my hand with her pinky finger.  I think she's finally starting to warm up to me.

We didn't meet anybody else of consequence worth mentioning.