The Greatest Padres Performance in an All-Star Game

Share All sharing options for: The Greatest Padres Performance in an All-Star Game 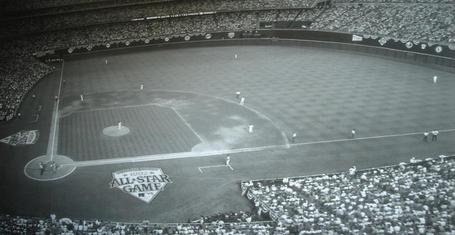 We continue our countdown of the greatest Padre performance’s in an All-Star Game with #1. I think it is pretty obvious that the 1992 All Star Game was the Padres’ greatest performance. While the Padre players didn’t necessarily perform, the excitement surrounding our Padres leading up to the game was unmatched. Imagine the anticipation with five players, three of which were starters and seven returning players. Not to mention the Padres were contending for the west. And what better place for such a game than the Murph?! I was psyched! And I was there!

I remember going with my dad, uncle and cousin. I still have my ticket stub and program. We got there early and watched batting practice from the left field plaza. It was a hot afternoon and we were trying to stay in the shade. I remember Ted Williams with George Bush throwing out the first pitch. I remember everybody going nuts during the introductions (How could they not with 12 Padres?!) 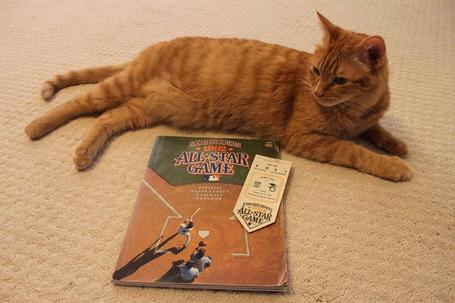 Then the game began and I remember the AL opening up a can of whip ass in the first… seven straight hits and four runs. That’s all I remember. After twenty minutes the game was over. I suppose it was fun to watch all the games’ best face each other. But it was no contest. 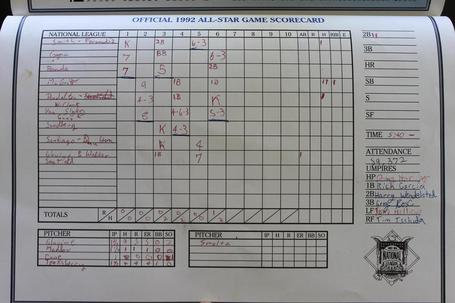 Notice my lineup card featuring Tony the Gwynn, Crime Dog and Benito all starting. Oddly enough this was my first and last time ever keeping score at a baseball game. I think I made the mistake of even trying to keep track of three dozen players rotating throughout nine positions. I guess after six innings I just gave up.

When I look back what comes to mind most was all the excitement surrounding the game. I use to look forward to the All Star Game. This years break I seem to be looking forward to women’s soccer more than baseball. What the crap? What happened? The game doesn’t really matter today. Oh yeah, "This time it counts". If it counts why are half the starters fishing or something? It would be nice to see some sort of overhaul of the mid summer classic. Not to mention the homerun derby. I don’t have all the answers, so I’m not going to even try. Just do something MLB so I’m interested again!

And do something quick because I have a feeling that San Diego will host the game soon. And who knows we might even have more than one mandatory representative on the team.