Jon and I went to the game yesterday.  While everyone else seemed to be looking forward to Anthony Rizzo's first Major League start, we were looking forward to some quiet friendship time together.  It may be our last chance to enjoy the peacefulness of the ballpark before the hoards of Rizzo fans take over tonight.

We sat up in section 318 and spread out over about 25 seats.  I put my program in a cup holder 6 seats away. Threw my flannel shirt behind me so that it lay 4 rows back.  I kicked my feet up, spread my arms and lounged so that I was touching about 8 seats.  You can be this wasteful when the crowd is this small, not after Rizzo arrives. 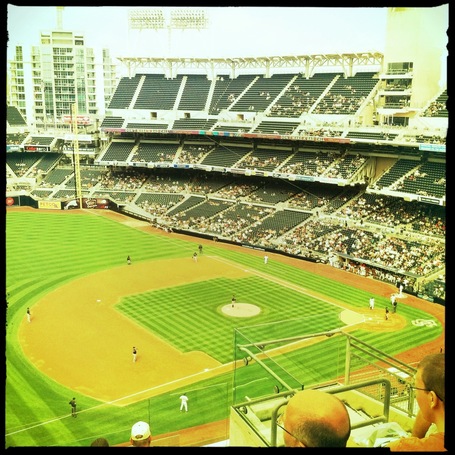 As we watched the game from high above the field, I read tweets about Rizzo aloud to Jon.  "Did you hear Rizzo brought 4 bags of luggage? This can't just be a trip to get his bruised hand examined.  It just can't be!  Jon I heard one of the bags was an over-sized fanny pack!  Does a fanny pack count as a piece of luggage?  Do you think it was four bags and the fanny pack or three bags and a fanny pack?"  Jon just giggled.  He wasn't phased.  He doesn't seem to be wrapped up in this ridiculously named Rizzomania.

After a few innings we went to get food and met up with Kev who was sitting down in 122.  Kev taught us a stadium secret that I'll be sharing on Monday as part of our Stadium Secret series.  It's so good.  I had heard about it before but never tried it.  You'll be amazed.

For the rest of the game we moved over to Kev's section.  Apparently Dustin Moseley dislocated his non-throwing arm while swinging the bat in the 5th inning.  People were tweeting that they heard him scream from their seats.  Maybe I wasn't paying attention or maybe I was ordering pizza at the time, but I missed it.  I imagined Moseley collapsing to his knees after belting out a Wilhelm scream. These things are better left to the imagination.

When Heath Bell came into the game in the 9th to preserve a 3-3 tie, we thought for sure the Padres would be playing extra innings.  Not so.  Bell gave up a 2 run double to Tulo which delighted the meat head Rockies fans seated all around us.  Revenge will be Rizzo's!