Last week I traveled from Nebraska to Wrigley with one spiritual stop in between. A family event called for me to be in Northern Nebraska over Memorial Day weekend. The Missus and I took this opportunity to drive to Chicago from Omaha with many stops along the way. If our drive took us past something baseball related, I was stopping. 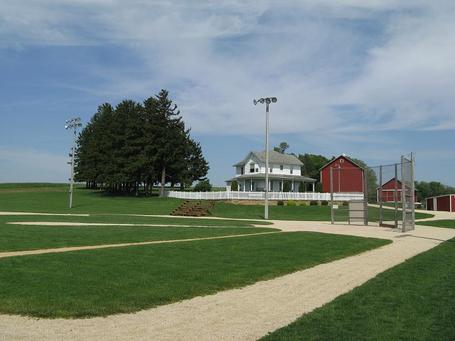 Jump ahead for lots of pics and my story… 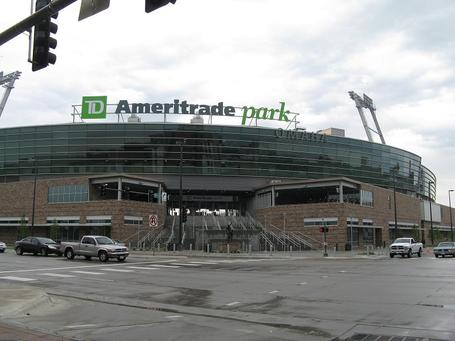 One side of my family traces many of its roots to Nebraska. We have a corn and soy farm along with a cattle ranch near the South Dakota border. Last weekend we visited the farm and spent time with extended family (way too extended, you know what I’m sayin’?). The only baseball connection here is HOF Richie Ashburn’s daughter was in attendance. She’s somehow related to me.

With the business end of our trip out of the way, Monday we headed east towards Heaven, errr, I mean Iowa. The drive seemed to take forever. I’m sure my uncontainable excitement didn’t help. My mind was racing, I was going crazy. I kept seeing people on the side of the road. "Moonlight Graham!" I’d yell. My wife was not amused.

Finally, There It Was. It was right in front of us. Heaven.

We arrived innocent as children, longing for the past. It just didn’t feel real, but it was. The Field of Dreams is perfect. The only thing it lacked was the corn in the outfield. At a couple inches tall, we were a few months too early. It really didn’t matter though, it was amazing. It really did feel like magic waters. 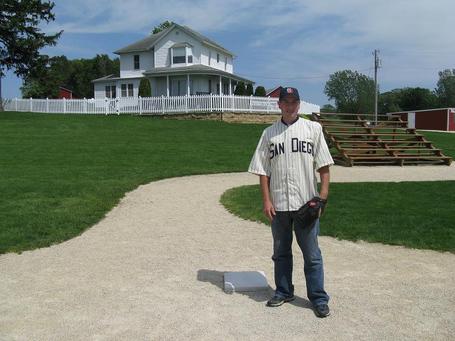 To my surprise, not many people were there, and this was Memorial Day after all. For a good half hour we had the entire field to ourselves. We walked around a bit, the house, the bleachers, the field. Just taking it all in. I turned to my wife and asked "You wanna have a catch?" 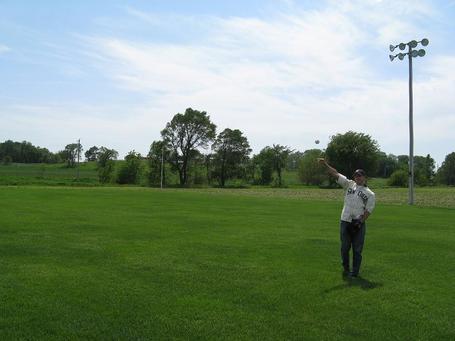 It doesn’t cost anything to visit and play at the Field of Dreams. Those who look after it keep it in better shape than it appears in the movie. We all have our ballpark lists, our favorite parks we’ve been too and those we can’t wait to see. The Field of Dreams in Iowa should be towards the top of everybody’s.

Then people began to come. So before the line of cars and traffic could slow us down, we took off with Chicago just a few hours away.

Just outside Chicago is probably the coolest Little League field on the planet. I didn’t need much of an excuse to stop and stretch my legs. I would have loved to play here as a kid. 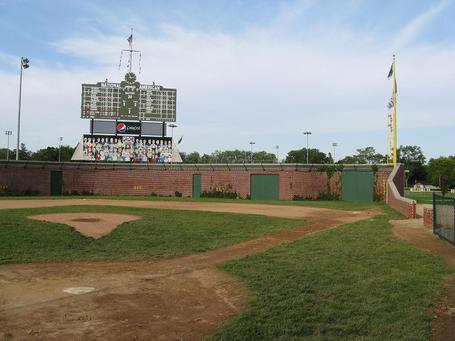 Chicago's Wrigley field has always been at the top of my list since I first saw a game there about ten years ago. We took in a day game, the only way to experience Wrigley. Cubs and Astros, Wednesday afternoon. 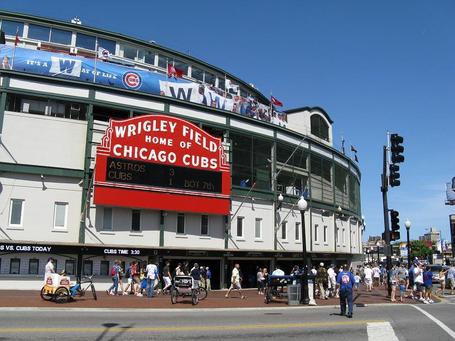 With time to kill that morning we hit up The Art Institute of Chicago… If you have the means I highly recommend it. 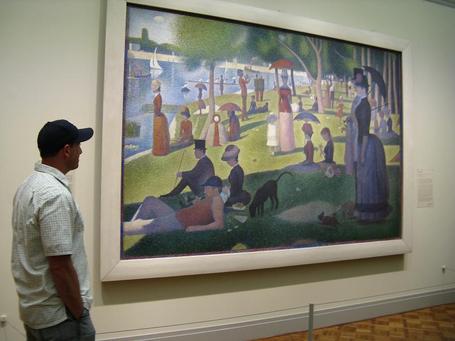 Taking the "L" to Wrigley Field is a lot like driving to Dodger Stadium on a hot summer day… smells like piss. It’s gross and dirty. But I guess that’s just part of the experience. At least the weather could not have been better. The day before was a hot sweaty mess. This day wasn’t going to be so humid as it was going to be windy. 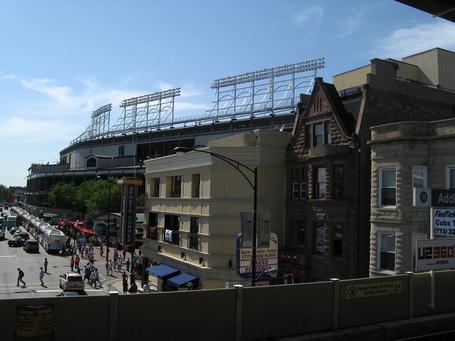 I couldn’t believe how much the wind was blowing out. Fukudome of all people flares a bloop over the infield that somehow lands in the first row of the bleachers. No way does that ball get past second base in Petco. Kosuke's Home Run was the only thing Cubs fans had to cheer this day. 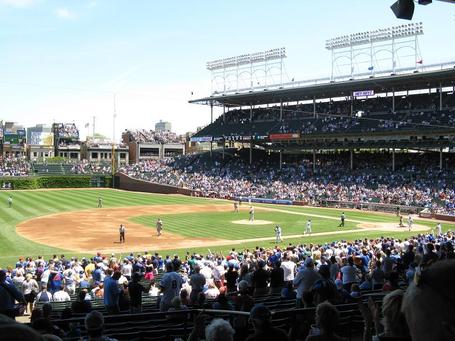 Around the fourth inning we decided to get some food and walk around. I went with a bratwurst… pretty good. We stopped in the Cubs Store and had a look. I was on a bit of a mission. I was at Wrigley Field about ten years ago. I also stopped in the store that trip and spotted the game used flags they fly around the ballpark. I spotted a blue and orange Padres banner, the one that flies atop the center field scoreboard to indicate the division standings. At the time I felt it was too much money and I passed. Ever since then I’d been kicking myself for not buying it. 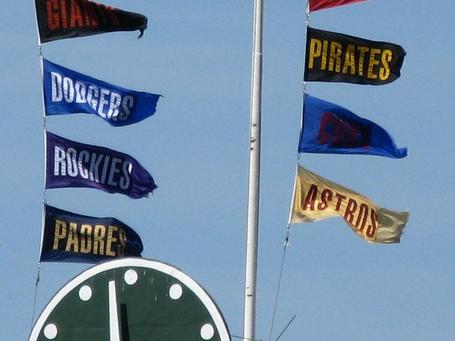 I asked the lady behind the counter about the flags and if they still sold them. She reached around the counter and pulled out a cardboard box with a few flags folded up. She pulled them out… Two Pirate flags and an Astros flag. Damn! I thought to myself. Sensing I was upset she asked what team I was looking for. "San Diego Padres, mam". "San Francisco you say." "NO! PADRES!" I didn’t want no Giants flag. She looked up what was in stock at some warehouse down the street. I can only imagine what this warehouse must be like, all kinds of artifacts. Sure enough they had two Padres Flags, and they’d be delivered by the eighth inning. I had to bring the cats some sort of souvenir. 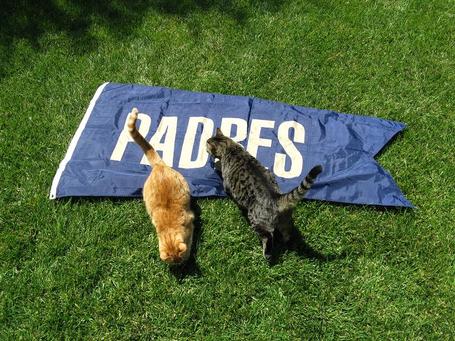 And what would a good story be without some ol’ time photos for jbox. 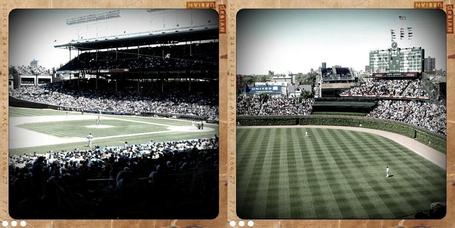