First Sweep of the Season!

Share All sharing options for: First Sweep of the Season! 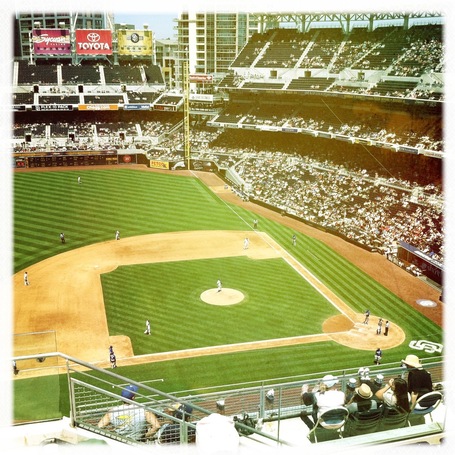 I went to the game yesterday. Upon entering the ballpark I made a stop in the Men's bathroom. When I was leaving a guy was leaving a stall with his young daughter, taking her directly to the exit. She was probably 3 years old. He had to take her into the Men's room since he obviously couldn't leave her outside by herself.

As soon as we all stepped outside onto the crowded concourse his daughter said precociously "Daddy! Why didn't wash your hands?" He mumbled something to her, trying to get her to quiet her down. As it is with kids, the few times when you desperately need them to be quiet, they get even louder, "DADDY! YOU DIDN' T WASH YOUR HANDS!!" Everybody looked at him with a disgusted look on their faces. I snickered saying "It's true, he didn't" under my breath to the guy next to me.

I also went over and introduced myself to Bobby who is the Padres' organist. We tweet at each other occasionally, we're kinda friends... no big deal. He's a nice guy. He was playing the Cantina Theme from Stars Wars at the time of this picture. 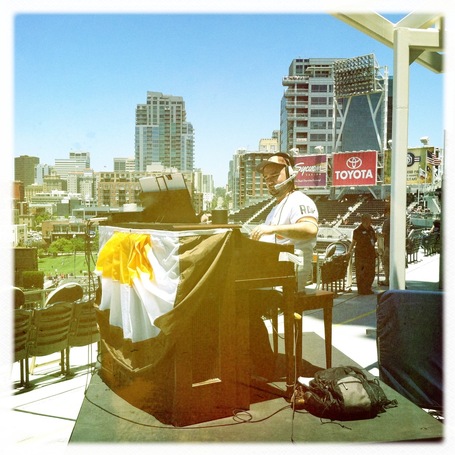 Anyway, the Padres completed their first sweep of the season yesterday. I went back through Baseball Reference and manually checked all the Padres seasons to see when they swept their first opponent in at least a 3 game series. There is probably an easier way to figure it out, but I can never find the stats I need when looking through B-R's play index.

TRIVIA Which season did the Padres never get a 3 game sweep of their opponent?

Find out after the jump!

This is a table. The table shows the date the Padres completed their first sweep of the season and the opponent that they swept. As I say, I did all this research by scanning the schedule and results from each season so if you see a mistake let me know.

The answer to the trivia question is 1971. That's fascinating right? It took me like 45 minutes to make that chart. Maybe I should have made a graph instead.

Anyway if you were at the game yesterday, I hope you weren't getting food or in the bathroom during the 3rd inning, because that's when all the scoring took place. I was in my seat eating soft serve ice cream and happy as a pig in sh_t. If you did miss the 3rd inning you're still okay because you saw Tim Stauffer put on a pitching clinic the rest of the game.

Must win games from now until the All-Star Break! Go Padres!