The shirt's not yellow, it's chicken.

Share All sharing options for: The shirt's not yellow, it's chicken. 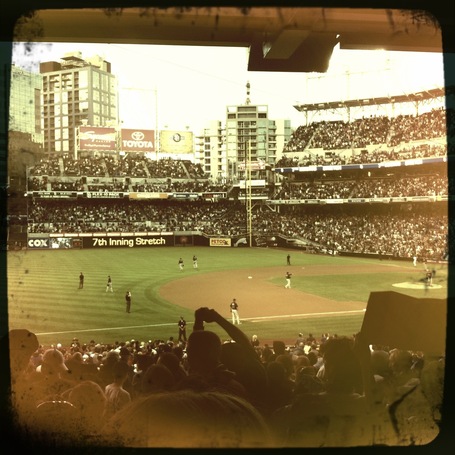 I arrived at Petco Park early on Saturday to ensure that I was one of the first 25,000 in attendance and would receive a beach towel.  Upon entering I saw large group of fans all wearing the same bright yellow shirt.  I too was wearing a yellow shirt, though mine was the SU2C Standiego Shirt.

The group hovered around me and people gave me smiles as if I was one of them, because the shirts looked so similar.  I watched as park security started to lead them into VIP entrance.  I briefly considered attaching myself to the group and following them into the bowels of Petco Park, then I hesitated... I'm such a chicken.

It wasn't until later that I realized how badly I screwed up, because the entire group of yellow shirts were on the field.  They were a choir singing the National Anthem.  I was kicking myself.  If only I wasn't such a little scaredy cat I could have joined them and had a great story to tell.  I guess there's also the possibility that I would have been caught and thrown into the Park's dungeon.  Either way it would have made a much better blog post than this one.