The Padres used to publicize their Designated Driver Program. I remember the radio advertisements back when they played at Qualcomm Stadium. If you took part in the program, which was a partnership between the Padres and MADD, you were a "Dry-er Friar". It's something I knew about but never took the time to participated in because I thought there would be too much paperwork.

Nowadays you rarely hear about being a Designated Driver at the ballpark. It's mentioned in passing on Padres.com and its benefits only spoken about in whispers in the seedy underbelly of the Western Metal Supply building or in the handicap bathroom stalls marked "out of order". That's why the secret of the Designated Driver Program must now come to light.

Last week at the game Kev revealed the secret to us as we cheaply tried to decide if we could choke down our food without purchasing a drink.

Kev asked, "Dudes, why are you paying for sodas? Just sign up to be a designated driver at Guest Services and get a soda or water for free. My parents get free sodas that way at every game."

Jon brushed him off "I'm a proponent of the designated driver program, but I don't have the time, my car's not big enough and I don't have the patience to chauffeur a bunch of drunk strangers home."

Kev responded, "You don't need to drive anybody anywhere. All you have to do is provide your name, address, email address and sign a pledge that you won't drink alcohol before, during or after the game and they give you a free drink coupon."

I prodded Kev, "What's the catch? I wasn't planning on drinking anyway and I didn't drive here. They're just going to give me a $4 soda for free?"

Kev nodded and said that there was no catch.

Jon and I timidly approached Guest Services and requested the form since we might be a butt of one of Kev's pranks. We braced ourselves for the verbal lashing that was sure to come when we asked for a free drink coupon. We just knew that we were going to be given the third degree, a stack of paperwork or at very least a breathalyzer test, but no, they handed over the form just as easily as if it were a pocket schedule.

We filled out the form, got the coupon and we exchanged it for a soda. We didn't even get the stink eye from the food service employee either when we used it, she knew exactly what to do with it. There was no hassle at all. We couldn't believe it. Why haven't we been doing this for years? Do other people know about this?

The next night Jon and I went to the game with Dex and when it was time to get dinner we told Dex that he had to sign up and try it. Dex didn't want to participate, he thought somehow we were cheating the system, taking advantage of the Padres or in someway being dishonest because we never had any intent to drink alcohol at the game.

When we got to the window, the Guest Services Employee gave us our two forms and offered one to Dex as well, who was standing to our side. Realizing that we weren't doing anything wrong Dex changed his mind and he accepted. Jon tried to rat him out though telling the employee, "Dex doesn't even have a car!" The employee assured him that it was okay and made him feel at ease, "just as long as you don't drink" he said. In fact he convinced us that not only were we not cheating the system, but it was a good thing we were doing. 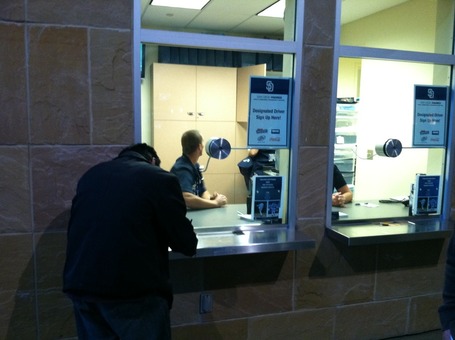 So if you're not one of those craft beer nerds or a guy that just has to have a beer to enjoy a baseball game you'll never have to buy your first soda again. Just sign up to be a Designated Driver at the ballpark and give the Guest Services Employee a wink and tell them Gaslamp Ball sent you. Your first soda is on us.