That was a fun game last night.  Dex, Jon and I were in attendance.

We were there to see the dawn of a new age, Anthony Rizzo's Major League debut.  Prior to the game he already had about a hundred fans standing on the first baseline waiting to get his autograph.  In fact, during his introduction he was still signing.

This was probably the first time since Gwynn and Caminiti played that I have so eagerly awaited a batter's spot in the line up.  There was that extra bit of excitement knowing that he'd come to the plate that has been missing for more than a decade.  Whether it will remain that way or if it was just because of his debut, remains to be seen.

He initially struck out looking, but in his second at bat he almost hit a home run into the Padres bullpen.

He would have too, if it wasn't for those pesky Petco Park walls being so far away.  The ball hit half way up the wall and he hustled into third base with a triple as his first Major League hit.  We haven't had a first basemen who could hustle since... Fred McGriff?  Was he fast?  I can't even remember.

After that he drew two walks. Not a bad eye or plate discipline for a 21 year old kid in his first game in the big leagues. 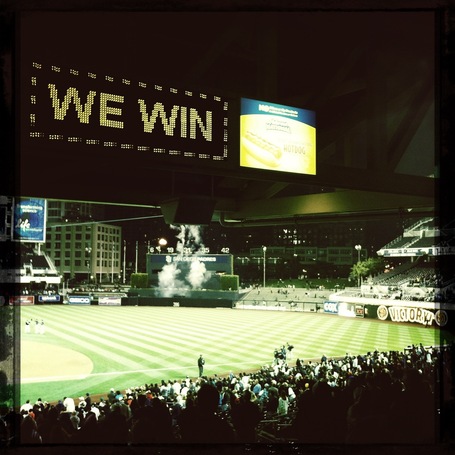