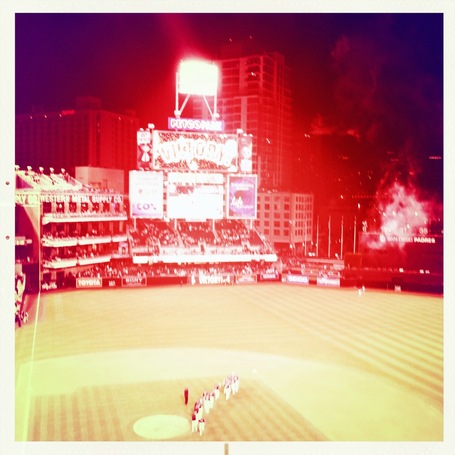 The Padres got off to another bad start last night versus the Pirates.  If I remember correctly Jorge Cantu made an early fielding error and Mat Latos gave up multiple hits including a deep double to right center field.

Jon and I were hungry and were tired of the usual ballpark food choices and decided to walk across the street to Subway during the middle of the third inning.  As soon as we left the park we heard cheers and fireworks exploding.  In line at Subway we heard another volley of fireworks and more cheering.  "We're missing everything!  Hurry up with those sandwiches!"

When we re-entered the park the security guard told us that we had missed a Mat Latos home run, the first for a Padres pitcher at Petco, and an Eric Patterson solo shot to dead center field. We are the worst fans.

Fortunately there was still some action left in the game.  The Padres some how scraped together 3 back to back to back infield singles and then Ryan Ludwick took a walk to start the scoring again.  The scoring was capped off in the 8th with Rob Johnson hitting the go ahead home run, that almost dropped into the Frazee Paint Can in left field.

As Heath Bell sprinted out of the bullpen to his awful entrance music, Breaking Benjamin's "Blow Me Away", I noticed that they put graphics up on the video screens circling the Toyota Terrace level.  There is a shadowy graphic of Heath Bell's intimidating eyes and the words "Heath Bell Blow Me".  Then you have to look over to the next segment of the video screen to see "Away".  I fumbled with my camera, but the picture didn't come out unfortunately.

The game turned out okay though. Heath Bell recorded his 41st consecutive save, which tied a club record set by Trevor Hoffman.  Why did it feel so much more impressive when Hoffman did it?

Oh yeah, John G. reminds me that the Padres also shot off the fireworks and flames before the final out of the game.  The last batter struck out but Rob Johnson dropped and lost the ball.  The fireworks exploded while Johnson spun in circles trying to find the ball and luckily found it in time to throw out the runner.  Good thing he wasn't distracted by the noise.