Share All sharing options for: Padres lose in extra innings to Cardinals 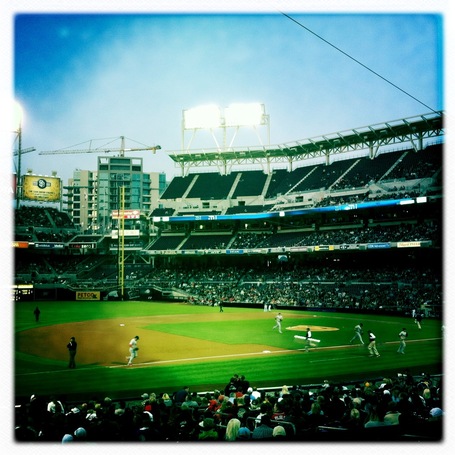 The game started with a visit from a familiar early run by the opposition.  Brad Hawpe made a pretty sweet diving play to grab a hard grounder, got to his feet and then underhanded the ball behind and above Aaron Harang who was on his way to cover first base.  A pure bred ogre might have caught the ball, but Harang is only 1/3rd ogre.  The Cardinals scored on the error.

Brad Hawpe was quick to cover up his own mistakes with a two run homer to dead center field.  If you're the Padres you've got to get your home runs in early before the 8 o'clock curfew.

The score was 2-1 Padres and I was just entering the park and saw the flame throwers on top of the batter's eye ignite after Hawpe's home run.  I jokingly mentioned to the group I was with that we probably just missed all the Padres scoring for the night.  Turned out it wasn't much of a joke, the punch line was more of a punch in the gut and a premonition of things to come.

The Padres started playing "Extreme Fan Makeover" on Friar Vision again.  It seems better this year.  They have a fan show a before and after shot of their clothing.  It seems closer to how I envisioned it when it was originally my idea.  I still really think it needs to be a live commercial though.  Have the in game host grab someone with ratty Padres gear out of the crowd and make them over for another appearance later in the game in the fresh outfit.  It'd be a great way to show off new merchandise.

They should use this idea that I thought up last night too.  As the Official Team of the Military they should add U.S. Navy Signal Flags up by the Flag area in upper right field or on one of the wires that holds up the protective net behind home plate.  Have it spell out a secret message each game that only Navy personnel will be able to decipher, or those civilians that have the iPhone app that does it.

Who will be the first to decipher this secret message?

Harang pitched well for the remainder of his start, but the Cardinals were able to score on a fielder's choice in the 7th.  The game moved along quickly.  By the time the 9th inning rolled around it was just 2 hours old.

I was busy during that time building a panoramic photo of Petco Park using Microsoft's free Photosynth app.  Here's the entire view from my seat.

The Padres had men on base and opportunities to score in the bottom of the 9th, but hard hit balls from Ryan Ludwick and Cameron Maybin (I think it was him) were hit directly at outfielders.

After the 10th I had to leave and made it all the way to the front gate before I put my hands in my pocket and realized that my keys were gone.  I had a "Mom's missing!" moment where I just about freaked out and called Dex but on returning to my seat I found them on the ground.  Whew!

The Cardinals ended up scoring on a single up the middle that went off Orlando Hudson's glove in the 11th.  In the Padres half of the inning any attempt at a rally was killed when Lance Berkman made an insane diving catch where he snow coned the ball and somehow managed to hang onto it.