Share All sharing options for: Padres score 1 in the 9th but still lose by 3 runs to Mariners

A casual dinner kept Jon and I from getting into our seats until just after 8 o'clock, sometime in the third inning. After dinner I realized it was going to be cold so I drove all the way home to get my Padres parka so while I would be late at least I could watch the game in relative comfort instead of getting hypothermia.  Jon watched the game in short sleeves, because he's manly.

I still can't tell you what happened in the first 3 innings of the game.  Mat Latos gave up two early runs which seems to be a habit of his now a days, one I'm sure he'd like to kick.  Everybody always talks about how pitchers love Petco Park for the way it stifles offense, but when pitchers eventually do give up a run or two, it's got to feel so much worse because they know there is a good chance that your offense can't get them back in the game.  Such was the case last night.

Okay I watched the game recap, I see now that Latos gave up a 2 out triple in the second that scored a run.  They don't show how the Mariners scored the second run in that inning.  I'm going to assume they got a 2 out knock.  Don't even tell me if I'm wrong.  I'll just live out my days with this belief.

Two plays that stood out to me in the remainder of the game both benefited the Mariners:

1.  Carlos Peguero robbed a home run from Jorge Cantu and doubled Ryan Ludwick off first.  It was a close play and I couldn't tell if he was safe or not.  Regardless, it stole precious momentum and runs from the Pads.

2. Jason Bartlett made contact with Ryan Ludwick in the 9th and effectively killed any chance to rally.  Bartlett didn't see the ball was actually dropped in the outfield and started running back to first base and that's where he met with Ludwick who was rounding first at the same time.  He then turned around and tried to get back to 2nd base, where he was called out.  Fans around us clenched fists full of hair due to frustration.  After a meeting of the umpires it was ruled that Ludwick was in fact out for making contact and Bartlett was sent back to second because he wasn't forced out.

The second play caused much discussion in the stands.  We thought about how nice it would be if the umpires explained the call like they do in football over the PA system.  A representative from the umpire union would probably just get on the PA and tell us that they don't need to explain their calls to anyone.  Oh well.  We eventually figured it out. 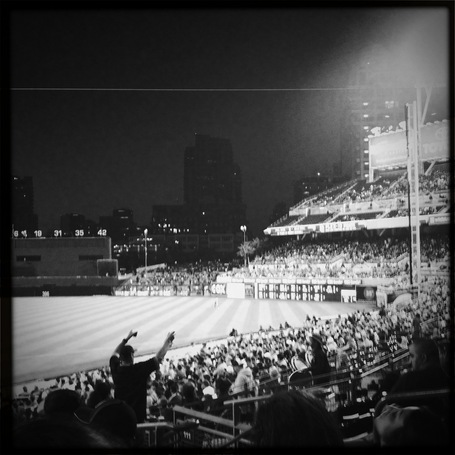