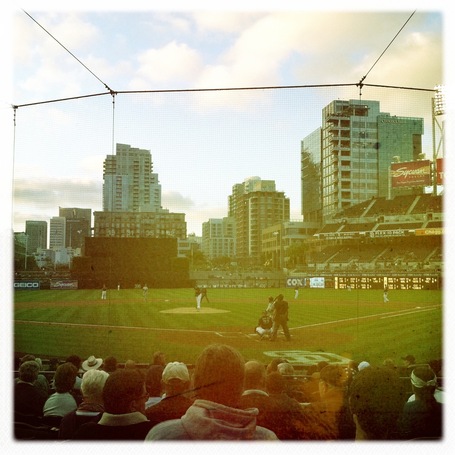 Jon and I went to the game last night.

As we approached Petco Park we spotted Pad Squad Andre who looked at our tickets and then mockingly tried to welcome us through the VIP gate.  "No Andre!  We're common folk!  We have no need of your precious VIP gate!"

We were sitting in section 102 courtesy of Jon's wife's boss.  We had to be on our best behavior, which is hard for us.  Being so close to home plate made me aware of a couple of things.  First there were easily a dozen broken bats during the game and each one sounded like a gun shot.  Second Aaron Harang is huge and might be one part human and two parts ogre.

Harang had one of his best starts and combined with the help of Ryan Ludwick hitting into a double play during a key at bat was able to keep the game scoreless.

Jon and I took a break prior to the 9th inning to greet the Pad Squad.  All of our favorites were in attendance.  Pad Squadders Loxie, Alicia, Elizabeth, Becki, Andre and William.  I meant to get a picture and print off some wallet sized photos for all of you but just then Mentor walked by and told us to leave the Pad Squad alone.  Oh well, the 9th inning was starting, time to get back to our seats.

In the 9th Heath Bell came in as a stopper.  With a man on first, Jason Bartlett and Orlando Hudson tried to turn an inning ending double play but Jonathan Lucroy slid into second base really flamboyantly doing "spirit fingers" or some sh_t.  He managed to swat the Barlett's throw out of the air and break up the double play.

If you watch the replay you'll see Hudson eagerly rush over to second in preparation for a swat to Bartlett's rump.  His 15 day stay on the DL meant that he hasn't touched Bartlett's back side in over two weeks and you better believe he was upset when Lucroy robbed him of the chance.

In the bottom of the 9th the Padres loaded the bases for Orlando Hudson and he got his revenge.

The Padres win on a Hudson sac fly!  The dog days are over!