Time to bring on the Challenge Flag!

Share All sharing options for: Time to bring on the Challenge Flag!

I just can’t handle the umpiring over the last two Padre games in Arizona. Monday, Angel Hernandez blows yet another call, but thankfully the call doesn’t cost the Padres the game. However, Tuesday night Joe West clearly misses Patterson tagging up and scoring. His blown call shifts momentum in favor of the Dbacks and costs the Padres the game. So this gets me thinking.

Is it me, or is this one of the worst season s for umpires so far? I swear it seems the men in blue are missing more calls than ever. Or maybe it’s just that there are 45 HD cameras at every game. I really don’t know. Regardless, I think it’s time for change. Oh and let’s not forget Jim Joyce…

The easiest solution in my opinion is to adopt some sort of system similar to the NFL. You give each manager two challenges a game. If the challenging manager is correct and the call reversed on both accounts that team continues to get a challenge until the ruling on the field stands. To keep a bit of tradition and level the playing field between the umpires and managers, the managers would be prevented to seeing a replay before challenging a call. It’s not as if they show anything on the Jumbotron anyway. 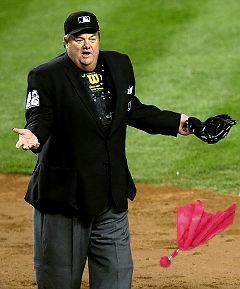 MLB could really take it a step forward. According to a recent study "Pitch-Track" is over 95% accurate. Far more accurate than any human. Umpires could have a sensor, say in their pocket, that indicates to them whether the pitch is a ball or a strike. The home plate umpire than signals to everyone the correct call. The umpires would still be relevant, calling runners safe or out, balls fair or foul, etc. Using pitch track would eliminate the ever so changing strike zone between umpires. It would also eliminate the need to argue balls and strikes all together.

I don’t recall the umpires making a big deal about replay being used for home runs as it has been for the last couple seasons. Most likely this is because they really don’t have a legitimate argument against replay. Get the call right and you won’t have to worry about it.

Fans would also love it. Just imagine a questionable call is made. The manager comes storming out of the dugout. Standing toe to toe, screaming ensues. Fans are chanting "Throw the flag! Throw the flag!" Finally, Buddy can’t take anymore and throws a red hankie to the ground. I go nuts! You go nuts! Everybody in the stands goes nuts!!!