It's like the whole season built up to this moment.  Like the Padres have been practicing tantric offense and then unable to hold it in any longer, they just jizzed all over Miller Park.

Cameron Maybin and Jason Bartlett both had 4 hits.  The great Chris Denorfia had 3.  Even the players who perpetually struggle got in on the action, Ryan Ludwick hit a two run homer and Brad Hawpe had two hits and an RBI.

If you weren't following the game, the Padres came out of the box hitting and by the 3rd inning had built up an early 5-0 lead.  Then they completely sh*t the bed and lost the lead in the 6th.  In the 8th they came back and scored 8 runs on 9 hits. 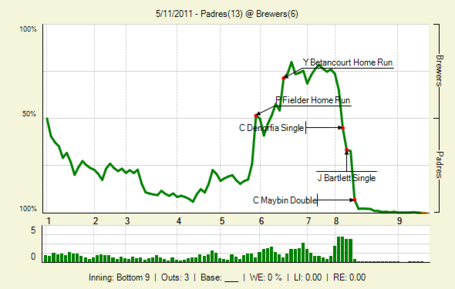