Jon and I drove down to the ballpark together a little after 1 o'clock.  Our search for free parking kept expanding around the ballpark until we finally parked on Market and 19th on the other side of the freeway.  Much to Jon's dismay, I've never paid for parking at a baseball game and I don't plan to start now.

After a walking a half hour we finally reached Petco Park and there was already long lines to get in.  We skipped these and headed to the block party on K Street.  Randomly we bumped into Dex while he was on the corner getting ATM - getting money from the ATM.  He was on his lunch break and we all went in the block party where they had a line of roach coaches serving food.  All of us agreed that we wished that they'd do this block party for every game, or at least during weekend games. Jon and I found a coach serving delicious foods.  He ordered and ate a Monte Christo and I had the best Philly Cheese steak ever.  We both drank Mexican Cokes, that's what we call them here in America. Take a look at that picture of Jon's throwback 1935 Ted Williams Padres Jersey.  That's sick right?  He only wears that for special occasions.

Once inside the park we walked by fans hugging and greeting their Padres ushers in a joyous reunion after a long winter. I thought to myself how annoying it is when fans get really attached to -- "Hey look there's Pad Squad Andre!"  We rushed over to him smiled adoringly at him while he wished us a Happy Opening Day.

It was time to go to our seats.  It was then that I realized that I had been telling everyone that we were sitting in section 317, when really our seats were in 318.  Oh well.  After all these years I can never remember that even numbered sections are on the first baseline.

Much to our chagrin our seats were in the second to last row.  It was a warm Spring day down below, but a cold and blustery Winter's day in our seats.  We clutched our arm rests tight and fought off our feelings of vertigo.  The pre-game ceremonies were beginning.

An executive from Sycuan Casino was throwing out the first pitch.  Jon was pissed.  "Last year they had Phillip Rivers throw out the first pitch!"  I commented on his jersey.  "That's one of those fake Padres jerseys from Target, somebody get him a real jersey!"

Then came the team introductions.  Dick Enberg was the Master of Ceremonies for the second year in a row.  Somewhere Ted Leitner was grumbling about his 32 seasons of service and Jerry Coleman was glad not to be in a Tuxedo.

As usual Enberg seemed a little bit too complimentary towards the Padres' opponents.  "Welcome the World Champion San Francisco Giants!"  and "Two time Cy Young Award Winner Tim Lincecum!"  I rolled my eyes.  I thought it was understood that the announcer would read off the opponents names in a monotone voice to a chorus of boos from the crowd.  What the eff was this?  Padres fans did cheer for Tim Flannery and Bruce Bochy though which I guess would be alright if we weren't about to play them. 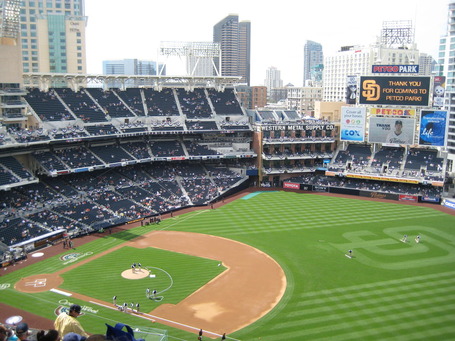 Finally it was time for the Padres' introductions, oh wait we have to sit through the introductions of Padres trainers, staff and clerical workers.  "Get to the starters already!" I screamed quietly to myself.

Jason Mraz sang the National Anthem in harmony with some other dude.  He was introduced as "San Diego's own Jason Mraz."  Mraz isn't from San Diego, he just moved here at some point in the 90's.  I don't know much about him other than that everybody always talks about him like he's a San Diego native even though he's from Virginia.  I think I also read somewhere that he washes his hair with avocados.  The singing sounded good though, check it out:

Let's see what else happened? Let's switch to bullet points:

We also won the game.  More on that later.  Maybe.