Jon and I went to last night's game.  It was our 4th game of the Padres first home stand.  There were moments of pure ecstasy where we thought we were about to witness the first walk off win of the 2011 season. On the flip side of the coin, there were brutal moments where we were eating really gross $13 steak sandwiches while the Padres struck out with the bases loaded and the Reds dropped 6 runs on us in the 11th inning.

@gaslampball I only said it was good. If anybody put it on a pedestal, it was you!less than a minute ago via Twitter for iPhone

Yeah WE were the ones that put it on a pedestal matthewverygood, it was us.

Here's what Petco Park looks like after 11 innings of baseball and the home team is down by 6. 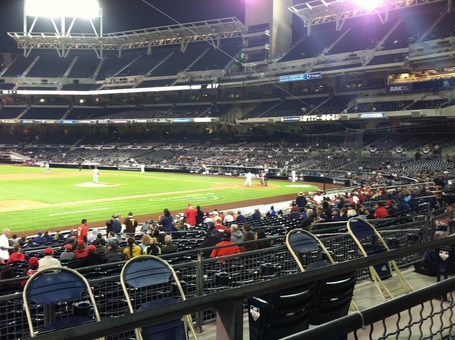 Tough one tonight back on the grind tomorrow peace and hair grease SD...less than a minute ago via Twitter for iPhone