I turned to another spectator, "Does that look like Brian Giles to you?"  "Yeah a little bit" they answered, but I'm not sure if they knew who Brian Giles was.

We'd already played the team in question earlier in the season and I knew that he wasn't playing then.  Maybe he's a ringer.  I left still not convinced that he was who I thought he was.

Well I saw him again and this time I was lucky enough to have my camera with me.  He was playing with his brother Marcus Giles and few Chargers this time.

They both seemed to be having a lot of fun, but playing really casually.  They weren't taking the game too seriously, but not goofing off either.  It wasn't depressing like it was watching Eric Byrnes play softball.

Brian was pitching.  You'll notice that he's using a right handed glove in the picture below.  He slow tossed a ball inside at one of his teammates and seemed really concerned that he might hit them and apologized profusely after the incident, even there was absolutely no risk of injury.

I'm pretty sure their team lost.  Marcus threw the ball away twice and flew out to left twice.  Brian reached base on an error, though it was a hard hit line drive to right.  Regardless I think everybody had fun, I know I did. 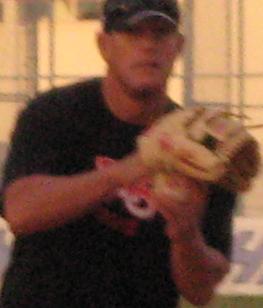