AAA Tucson Padres Unveil Uniforms and Caps, while I wonder if a more nefarious plan is at work

Share All sharing options for: AAA Tucson Padres Unveil Uniforms and Caps, while I wonder if a more nefarious plan is at work

I really like the old font on these new Tucson uniforms. All in all, they look pretty good, except for the Military ones, which are just hand me downs from the 2010 San Diego Padres. The camouflage still looks fake. I was hoping we'd never have to see those hideous uniforms again. They should be handed over to the local American Legion Post and burned in a proper ceremony like they do with American flags that are beyond repair.

If there is one thing that bothers me it's that the San Diego Padres should be using these retro stylings for their own uniforms. Now the Minor League Club is just one more barrier standing between the Padres and a return to their old uniforms. Now when fans suggest that the SD Padres wear the old style Friar logo or use the old Padres font, management can quickly respond that they can't because they'll look too similar to the Tucson Padres.

Maybe it's just the conspiracy theorist in me, but I think they had the Tucson Padres use these uniforms for that very reason. Just wait, they'll soon have the team named the North County Friars and wearing Brown and Gold in a ploy to satisfy the fan's demand but the real purpose will be to keep the Friar nickname and the old colors and fonts from being associated with the Major League Club. With the pesky retro fans satisfied, Padres management will be able to explore all the colors of the Rainbow of Depression, which only has two colors, blue and gray.

"We are really excited about our new look," says Tucson Padres Vice President/General Manager Mike Feder. "The cap and jerseys tie in the retro look of the San Diego Padres, while maintaining a fresh feel and a Tucson connection." 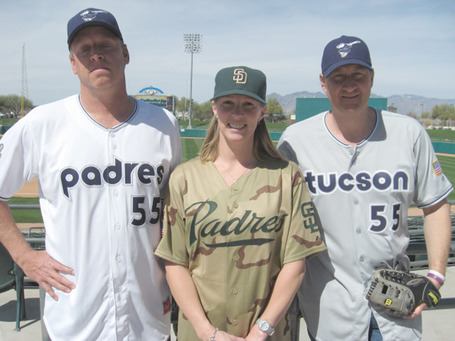